The title of this article is ambiguous. Further meanings are listed under Tijuana (disambiguation) . 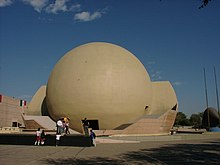 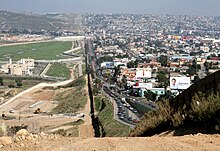 Tijuana [ tixwana ] is a city in northwestern Mexico in the state of Baja California on the coast of the Pacific . The population in 2019 was approximately 1.902 million local people and over 2.3 million in the metropolitan area . The city, which is just 18 miles south of downtown and right on the southern border of the US city of San Diego , is a major destination for tourists and travelers from Southern California . Tijuana is part of the metropolitan area of San Diego – Tijuana and the megalopolis of Southern California, which begins north of Los Angeles and extends into the Mojave Desert .

As a result of the drug war in Mexico , Tijuana became one of the most dangerous cities in the world , measured by the murder rate , in the 2010 decade.

The city is right on the border with the USA . Tijuana's international airport, General Abelardo L. Rodriguez International Airport , is served by the airlines Volaris , Aeroméxico , Interjet , Viva Aerobus and Calafia Airlines from 20 destinations in the north and center of Mexico. The airport is right outside the US border fence (across the street); there is a paid pedestrian bridge to a terminal (collectively Cross Border Xpress, "CBX") on the US side.

Population development in the metropolitan area

Tijuana is divided into 9 delegations with their own administration:

Border fortification reaching into the Pacific at Tijuana (" Mexican Wall" )

The city of Tijuana maintains the following city partnerships: