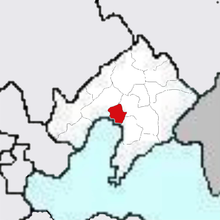 Panjin ( 盘锦 市 , Pánjǐn Shì ) is a prefecture -level city in northeast China's Liaoning Province . It has an area of ​​4,084.18 km² and 1.3 million inhabitants (end of 2009). Panjin is located in the south of the province on the lower reaches of the Liao He . The city and the surrounding area are mainly characterized by the petrochemical industry.

At the county level, Panjin is made up of three boroughs and one county. These are:

Since September 2012, Panjin has become a symbol of national grievances across China: Millions of Chinese have been or are being driven from their land because the state is building new roads or buildings there. A property owner doused himself with gasoline and threatened self-immolation ; the Panjin deputy chief shot him dead.