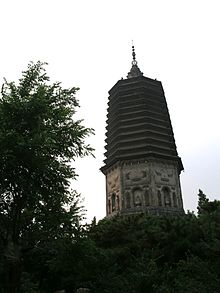 Liaoyang ( 辽阳 市 , Liáoyáng Shì ) is a prefecture-level city in northeast China 's Liaoning Province . It has an area of ​​4,741 km² and 1,835,000 inhabitants (2010). In 1904 the Battle of Liaoyang in the Russo-Japanese War took place here, which the Russian army lost to the Japanese army . Liaoyang is an important location for Northeast China's heavy industry.

Administratively, Liaoyang is made up of five districts , one urban district and one district. These are: