This article covers the location in China. For the asteroid see (3206) Wuhan .

Essential sections such as "History", "Economy, Transport", "Education", but also "Climate" do not have a single reference.

Wuhan ( Chinese  武漢 市  /  武汉 市 , Pinyin Wǔhàn ? / I Shì , short 漢  /  汉 , Hàn ) is a sub-provincial city and the capital of Hubei Province in the People's Republic of China . In the city center - the geographical urban area - 8,090,000 people (at the end of 2017) have their main residence. The entire administrative area of ​​Wuhan has 10,766,200 inhabitants (as of 2016) . The almost 8,500 km² administrative area is not a contiguous urban settlement area, but - with its rural settlement structure dominating outside the city center - would be more comparable to a small province. Inner Wuhan is the amalgamation of the three former cities of Wuchang ( 武昌 , Wǔchāng ), Hankou ( 漢口  /  汉口 , Hànkǒu , often translated as “Hankow” or “Hankau” according to the now outdated transcription of the Chinese post office ) and Hanyang ( 漢陽  /  汉阳 , Hànyáng ). In China, Wuhan is also poetically referred to as the “City of Rivers” ( 江城 , Jiāngchéng ) or “ Chicago of the East” ( 東方 芝加哥  /  东方 芝加哥 , Dōngfāng Zhījiāgē ).

Wuhan is conveniently located in central China at the confluence of the Yangtze and Han rivers ( 漢江  /  汉江 , Hanjiang, Hanshui). The flat urban area, which is characterized by numerous lakes, merges into the hill country in a southerly direction. Due to rapid urbanization, the number of lakes in the urban area fell from 127 in the 1980s to around 30 in 2019. Due to its geographical location, the city is repeatedly flooded.

The city is divided by the two rivers into the three former cities of Wǔchāng ( 武昌 ), Hànkǒu ( 漢口  /  汉口 ) and Hànyáng ( 漢陽  /  汉阳 ). Hanyang and Wuchang have been preserved as independent city districts (at the district level). Hankou, however, was divided into several new city districts. Today Wuhan is made up of a total of 13 boroughs . These are:

Wuhan is located at latitude 30 ° 33 'north and longitude 114 ° 17' east. In Wuhan there is a humid subtropical climate with an annual average temperature of 17.3 ° C and an annual rainfall of around 1300 mm. The average temperature in January drops to 4.1 ° C while in July it rises to 29.2 ° C. This makes Wuhan one of the hottest and wettest cities in China in summer. Every twelve months are humid .

The 2000 census counted 8,312,700 inhabitants in Wuhan, who can be broken down into the individual ethnic groups as follows:

The population of the urban agglomeration of Wuhan has grown rapidly in recent years. In 2035 it is expected to have over 10 million inhabitants. 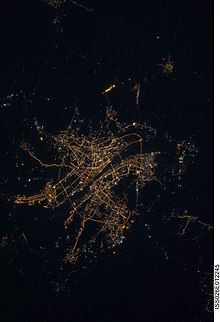 Wuhan photographed from the ISS at night , 2010 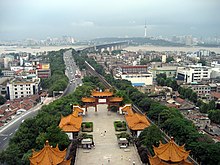 Bridge over the Yangtze River in Wuhan 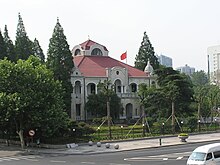 Building of the former Imperial German Consulate in Hankou, built in 1895 , today the seat of the People's Government of Wuhan

The Wuhan region was first settled around 3000 years ago. During the Han Dynasty , Hanyang's importance as a port increased. In the 3rd century, walls were built to protect Hanyang (206 AD) and Wuchang (223 AD). The latter also marks the establishment of Wuhan.

The Black Death may have been the first to break out in Wuhan in the 14th century.

Under the Mongol rule ( Yuan Dynasty ) Wuchang was raised to the rank of provincial capital. After all, about 300 years ago, Hankou was one of the four most important trading cities in the country.

Similar to Shanghai , there were European trade bases (concession areas) in the Hankou district until the mid-1930s, which is why a lot of colonial architecture has been preserved, such as B. the imperial German consulate.

Wuchang and Hankou played a central role several times in the country's recent history, the time of the Republic of China. The Chinese revolution began in Wuchang in 1911 with the republican uprising against the imperial central government in Beijing . The Kuomintang founder Sun Yat-sen was proclaimed the first (provisional) president, but left the leadership to Beijing's army chief Yuan Shikai , after whose death Wuchang and Hankou fell to the chili faction of the Northern Militarists . Their general Wu Peifu ruled the railway line to Beijing from Hankou and in 1923 let a communist rail workers revolt shoot down.

But as early as 1926 a united front made up of the Kuomintang, Communists and Guangxi Warlords conquered the city and relocated their southern counter-government to Wuhan. After the conquest of Nanjing, the united front broke apart in 1927, Chiang Kai-shek formed a national government in Nanjing from the right-wing Kuomintang , while the left-wing Kuomintang under Wang Jingwei formed a revolutionary government in Wuhan together with the communists. Chiang subjugated both Beijing and Wuhan, but was driven from Nanjing by the Japanese army in 1937. Instead, Hankou became Chiang's seat of government and de facto capital of China, but was also conquered by the Japanese in 1938 after the battle of Wuhan, which lasted several months . From 1938 to 1945 Chongqing (neighboring Sichuan Province ) was Chiang's capital.

Today's Wuhan was created in 1953 through the merger of Wuchang, Hankou and Hanyang. Today Wuhan is the second largest city in the inland of the PRC after Chongqing .

In 2017, a bio laboratory for research on the most dangerous pathogens ( BSL-4 ) was completed in Wuhan for 44 million US dollars (300 million yuan) .

The world's first people to be infected with the SARS-CoV-2 coronavirus and to contract it came from Wuhan. The first cases of an unknown lung disease occurred there at the end of November 2019. From Wuhan, the virus spread across the world within months. On 23 January 2020, the city due to which was COVID-19 pandemic under quarantine provided. The airport and train stations were closed, local traffic stopped and curfews were imposed, and residents were no longer allowed to leave the city. The curfew was lifted on April 7, 2020.

According to a study from 2014, Wuhan has a gross domestic product of 231.55 billion US dollars in purchasing power parity . In the ranking of the economically strongest metropolitan regions worldwide, it took 45th place. Counted as an independent country, it would be among the 50 largest economies in the world. The GDP per capita is $ 22,724. In terms of prosperity, Wuhan is in the middle among Chinese cities.

The city is the industrial focal point of Central China and has the mix of manufacturing companies in many industries, which is typical for Chinese cities with over a million inhabitants. a. Engine, ship, vehicle and mechanical engineering, cement factories, textile factories, chemical factories, paper manufacturing, an aluminum factory and a brewery based on the German model. A clear focus is the production of iron (from domestic ores and coal) and the steel industry with several rolling mills. So was u. a. With the help of German experts from the twin city Duisburg, a cold rolling mill was built.

Wuhan is almost exactly in the middle between the large areas of Beijing in the north and Guangzhou (Canton), Shenzhen and Hong Kong in the south, as well as Shanghai in the east and Chongqing in the west of the gigantic empire. There are continuous highways in all of these directions that meet here.

The Yangtze, which is around 1250 meters wide here, is traditionally the lifeline for heavy and mass transports. The port of Wuhan is the largest inland water port in China, as the river is also navigable for seagoing vessels up to this point. There is also a shipyard that builds Yuan-class military submarines.

Wuhan has seven bridges and a tunnel that cross the Yangtze. The First Yangtze River Bridge in Wuhan was built in 1957 with the support of the Soviet Union and for the first time allowed a railway connection between the northern and southern halves of the People's Republic . It is still an impressive construction with a lower railway line and an overhead road. In 1995 the second road bridge (a cable-stayed bridge ) was opened. In 2009, another combined rail and road bridge was opened for the Beijing – Guangzhou high-speed line.

In December 2009, Wuhan became the terminus of the Beijing – Hong Kong high-speed line, which was the world's fastest rail link at the time, to Guangzhou. The route was extended to Shijiazhuang in autumn 2012 and reached Beijing in late 2012.

There is now a rail link for regular container traffic between Duisburg and Wuhan.

The airport "Wuhan Tianhe International Airport" is one of the medium-sized airports in China and is located around 28 kilometers northwest of the city. Its flight schedule shows predominantly domestic flights, plus some direct connections to East Asian and Indian destinations. Long-distance flights to Europe are mostly handled via feeders to / from the aviation hubs in Beijing, Shanghai and Hong Kong. A second terminal was opened in 2008; however, since z. At the moment there is only one runway, the capacity of the facility is almost exhausted.

Inner-city traffic is suffering enormously from the burden of motorisation that is too fast: Always new road projects, both as broad breakthroughs in the old settlement centers and as new ring roads and feeder roads to the new city districts on the edge, should provide a remedy.

A rail-bound local transport network has been set up since 2012. Seven railway lines with a length of 540 kilometers are planned, in the center as a subway and otherwise as an S-Bahn . Currently (as of May 2013) the subway consists of two lines with a total length of around 57 km. Four more lines are to be added by 2017 and the subway network is to grow to around 173 km.

In addition to Wuhan University , which was initially founded as a teachers' academy in 1903 , the city is also home to twenty other universities and colleges. Some of them have been set up on a newly created campus in a scenic location. Subjects such as B. Surveying and geography, medicine, water management, metallurgy, geology and building materials are covered and are usually supplemented by an associated research landscape and new technology parks.

Wuhan University, with its park-like campus located on large expanses of water, is one of the most renowned universities in China.

In addition, other research institutions are located in Wuhan, such as the Institute for Virology Wuhan .

Countries that have opened a consulate in Wuhan:

Countries that want to open a consulate in Wuhan:

View over Hankou and Wuchang