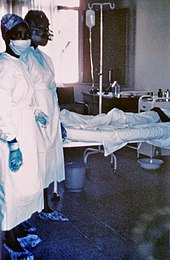 Quarantine station of a hospital in Kinshasa (1976)

The quarantine ( Germany : [ karanˈtɛːnə ]; Austria : [ karanˈteːnɛ ], [ karanˈteːn ] or [ kv ~ ]; Switzerland also: [ kʊ̯aranˈtɛːnə ]) is an officially ordered isolation of people , animals or to protect a society from infectious diseases Plants that are suspected of having certain infectious diseases or of being carriers of these diseases. When animals and plants are imported, quarantine is also provided preventively in the import regulations of the respective country to exclude the spread of the disease . The duration of the quarantine depends on the incubation period of the suspected disease. Quarantine is a very complex, but also very effective epidemic hygiene measure that is used in particular for highly contagious diseases with a high mortality rate.

In general, the term is used for temporary isolation. The word “quarantine” came into German in the 17th century like Italian quarantena from French quarantaine de jours (“forty days”). The French word quarantaine was derived in the 12th century from Gallo-Roman quarranta , which comes from Latin quadraginta ("forty") via folk Latin . A travel ban for people suspected of having a disease - Venice banned entry to the port for ships suspected of having a plague as early as 1374 - was known in Italy as quaranta giorni (forty days). The Spanish expression “la cuarentena” also describes the isolation of mothers and their newborns for a certain period of time. The custom of forty days of seclusion can also be found in Lev 12.1–8  EU . In the 19th century, another common word for quarantine was Kontumaz (lat. Contumacia , dt. Defiance, pride , obstinacy , stubbornness). In the field of maritime shipping, quarantine describes the waiting time of ships before living beings, goods and other goods are allowed to be imported. During the Cuban Missile Crisis , the term quarantine was used to represent the sea blockade.

The astronauts of the Apollo 11 mission were in quarantine for 17 days after their return to Earth (right: US President Richard Nixon )

An early request to isolate the infectious patients for 7 days in order to prevent the spread of the disease is already in the third book of the Torah and the Old Testament .

The idea of ​​40 days of isolation possibly refers to a statement by the ancient Greek doctor Hippocrates or from the Corpus Hippocraticum , which states (among other things) 40 days as the turning point for an illness.

As early as 1374, a quarantine, albeit only ten days, was carried out in Reggio nell'Emilia .

In the past, epidemic houses were often built to isolate people affected by an epidemic.

In order to protect their city from plague epidemics , the government of the Republic of Ragusa decided in July 1377 that all arriving travelers and merchants had to stay in isolation in specially built hospitals for thirty days and then forty (i.e. quaranta ) days before entering the city. including in Lazareti near Dubrovnik . The term quarantine in its current meaning was derived from this regulation . In 1383, quarantine was imposed on arriving ships for the first time in Marseille to protect themselves from the plague that was raging in Europe at the time . Another source says that Venice officials introduced the quarantine in 1374. The crew and goods were initially isolated on the island of Lazzaretto Nuovo and were only allowed to go ashore after thirty and later forty days.

In the 19th century, with the strong expansion of international sea trade, the quarantine was made dependent on whether the ship had suspiciously ill people on board. Cholera , typhus , yellow fever , plague or smallpox or if a person suspected of an epidemic had already died en route were deemed to be subject to quarantine . The quarantine flag , the letter Q of the international flag alphabet , is still valid today, but with the opposite meaning: Whoever sets the flag claims: "Everything is healthy on board, ask for free traffic permit (to be able to enter the port)." Only who Placing the flag Q together with the so-called auxiliary stand means to the authorities that he considers a health clearance to be necessary. In addition, marine radio is used today if the team deems special measures to be necessary.

Quarantine measures in 1918 protected Australia from the too rapid spread of the Spanish flu .

In the case of smallpox outbreaks in Germany , drastic isolation measures were still in place in the 1960s. Some of the people affected were isolated in school camps without medical care and had to take care of themselves.

During the COVID-19 pandemic , which presumably began in the Chinese city of Wuhan , the city was quarantined at the end of January 2020, all flight and train connections were discontinued and local public transport also ceased operations. The residents were instructed not to leave the city. These measures were expanded to several cities in the days that followed, with around 56 million people in 18 Chinese cities under mass quarantine as of January 25, 2020 . There had never been quarantine measures on this scale before.

Order of quarantine by the health department

In Germany, danger mitigating legal quarantine regulations in § 30 Infection Protection Act (IfSG) regulated. The provisions there state that the health authorities can and must order special segregation measures in hospitals in order to combat communicable diseases . If this happens against the will of the sick person, it is a matter of deprivation of liberty , which requires a judicial order at the request of the health department ( Art. 104 (2) GG, § 30 (2) sentence 4 IfSG, § 415 , § 417 FamFG ).

According to the Infection Protection Act , only lung plague and hemorrhagic fevers are subject to quarantine. The affected patients are treated in special isolation wards . For other diseases such as cholera or multi-resistant germs , less strict isolation measures are used. It is also possible to isolate the sick and suspected of being sick “in an otherwise suitable manner” in quarantine at home or in another building. In the course of the COVID-19 pandemic , quarantine orders were issued in Germany for people who had been in a risk area in the previous 14 days or had contact with a COVID-19 sufferer and are therefore considered to be contagious, without being sick themselves or to be suspected of being sick.

Only the treating physicians, nurses and pastors have access to the sick person; other persons can be allowed or denied access by the doctor ( Section 30 (4) IfsG).

Objections and actions for contestation against measures taken by the health department to prevent the spread of communicable diseases have no suspensive effect due to their particular importance for public health ( Section 28 (3), Section 16 (8) IfSG, Section 80 (2) No. 3 VwGO ), so that preliminary legal protection must first be sought from the administrative court ( Section 80 (5) VwGO).

Officials of the health authorities are entitled to monitor the measures ( Section 28 Paragraph 3, Section 16 Paragraph 2 IfSG).

Measures in the event of non-compliance

Affected persons who do not adhere to officially ordered isolation measures may be compulsorily housed in a locked facility by order of a judge ( Section 30 (2) IfSG). In urgent cases, the court can also order temporary deprivation of liberty ( Section 427 of the FamFG). In addition, it can suspend, extend or revoke the execution of the deprivation of liberty ( § 424 , § 425 , § 426 FamFG).

Violations of enforceable orders for determining residence according to § 28 Abs. 1 IfSG as well as quarantine orders acc. Section 30 (1) IfSG is a criminal offense and is punishable by imprisonment for up to two years or a fine ( Section 75 (1) no. 1 IfSG).

Regulations on compensation in the event of loss of earnings

Persons who cannot pursue their previous professional activity due to the quarantine and thus suffer a loss of earnings, receive according to. Section 56 (1) sentence 2 IfSG provides compensation. For the first six weeks, it is granted in the amount of the loss of earnings (net wages, Section 56 (3) IfSG), from the beginning of the seventh week in the amount of the statutory sick pay . The due date of the compensation is assessed according to the due date of the wages ( Section 56 (6) IfSG). This also applies if an employee becomes unable to work during the quarantine . His entitlement to continued remuneration against the employer in the event of illness is then transferred to the federal state that is liable to pay compensation ( Section 56 (7) IfSG). If the person entitled to compensation is granted unemployment benefit or short-time work allowance during the quarantine , his claim for compensation is transferred to the Federal Employment Agency ( Section 56 (9) IfSG).

The compulsory insurance in the statutory social insurance continues ( § 57 IfSG). The contributions are included in the compensation. Those who are not subject to insurance are entitled to a reasonable amount of reimbursement for their social security expenses ( Section 58 IfSG).

Use of the word in IT

Based on this analogy, the word is also used in the IT industry to store malware (such as Trojans , viruses and worms ) in a specially isolated, mostly encrypted area. This technique is often used by antivirus programs to be able to easily restore the file in the event of a false positive. Moving a file to quarantine is therefore advisable, especially for laypeople, rather than deleting the file completely.