The title of this article is ambiguous. Further meanings are listed under Győr (disambiguation) .

The Győr Basilica, below the Széchenyi tér (Széchenyi Square)

Győr, Carmelite Church with a former monastery on Wienertor Square (to the right of the bridge)

Győr ( ˈɟøːr ; pronunciation ? / I ; German Raab , Slovakian Ráb , Latin antiquity: Arrabona , Middle Ages: Jaurinum, Jaurium, Javarinum, Jurinum ) is a western Hungarian city with about 130,000 inhabitants. The city has county rights . It is located in western Pannonia , the Little Hungarian Plain . Here the Raab flows into the Mosoni Duna ( Moson-Danube or Little Danube), a right branch of the Danube .

In ancient times there was a Roman settlement of Arrabona in the area of ​​Győr . The name “Raab” is derived from this. The diocese and burgraviate were founded in the 10th century, and town charter followed in 1271. Győr was one of the last outposts outside Vienna during the Turkish wars and was therefore of inestimable military importance. Against this background, Raab was expanded into a fortress according to plans by the Italian builders Pietro Ferrabosco and Bernardo Gaballio . In the Győr Lapidarium there are also fragments of the Vienna Gate (Bécsi-kapu), a triumphal arch-like Renaissance portal, the imperial crown, the royal Hungarian coat of arms, all made of the hard, white imperial stone from Imperial Quarry (Hungarian: Császárkőbánya ).

→ Main article : Kaiserstein (rock) #Kaiserstein in Hungary, a selection in Raab (Győr) and in Ödenburg (Sopron)

The fortification of the city was completed in 1564 under the care of Hermes Schallautzer . During the Long Turkish War , Raab was conquered by the Ottomans in 1594 , but was recaptured by Adolf von Schwarzenberg in 1598 - an event that was given such importance that upon orders from Rudolf II , Raab crosses with the inscription “Tell God, the Lord "Praise and thanks that Raab will come back in the hand of Christians" were established, which you can still find today, especially in Lower Austria.

After the Ottoman army was repulsed in the second siege of Vienna in 1683, Raab flourished. In 1712 King Charles III awarded the city's market rights , Queen Maria Theresa confirmed Raab in 1743 as a royal free city (Hungarian: Szabad királyi város ). This resulted in a rapid upswing. In western and northern Hungary, i.e. in the predominantly Catholic parts of the country, bishops' residences displayed the triumph of the Counter Reformation with self - satisfaction and pride. In 1742, construction work began on the palace of the archabbots of the Pannonhalma Territorial Abbey near Győr . Johann Heinrich Mulartz built the hospital in a suburb in 1749. In 1718 a Jesuit academy was founded in Győr, which offered philosophical and legal training and to which secular students were also admitted from 1745. The Győr Royal Academy was founded in 1776. Antal and Ferenc Deák , among others, studied here . In 1809 the battle of Raab took place. As a result, the city was besieged by the French and had to surrender. In 1876 a railway connection was opened between Győr and Sopron (German Ödenburg), which was extended in 1879 in the second section to Ebenfurth ( Győr – Sopron – Ebenfurth railway ). In the 19th century, a textile and mechanical engineering industry developed that still exists today.

The reconstruction after the Second World War was difficult due to the location near the border at the Iron Curtain . Today Győr has about 130,000 inhabitants and three universities and is the seat of the Győr-Moson-Sopron County (Raab-Wieselburg-Ödenburg). The city is the seat of a Catholic diocese .

Since the opening of the borders, the city has been politically and economically advantageous in the focus of the city triangle Vienna - Budapest - Bratislava (Pressburg). It has been part of the Centrope European region since 2003 . Győr is also located on the Magistrale for Europe , an important trans-European project with which a high-speed rail line between Paris and Budapest should be realized by 2015 .

Győr is one of the most important industrial locations in the country.

In addition, the Göppingen model railway manufacturer Märklin has one of its two production sites in Győr. This is where the 1-gauge products, since 2008 the Lehmann-Groß-Bahn (LGB) and since 2009 some of the cars for the nominal size H0 (formerly the Sonneberg plant ) are produced.

Founded in 1896 as a mechanical engineering company, Rába is now a commercial vehicle manufacturer. 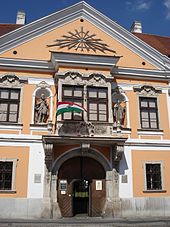 According to a memorial carried out between 1637 and 1650, the executing mason of the college and the church was Bartholomäus della Torre , from Ramponio in the diocese of Como in Italy, together with the older son Giacomo della Torre. "Bartholomeus Murarius, qui Templum Nostrum aedificavit". According to the inscription on the facade, the church was inaugurated in 1641 (see Kaiserstein for the Jesuits ).

The work was hesitant, the money flowed sparingly. The continuity was given after Bartholomäus' death by Giacomo in 1658, and after his death in 1669 the Raab College commissioned the brother Francesco della Torre , meanwhile a busy Prague court stone mason, together with the builder Christian Fahrnleitner. The Jesuits must have been satisfied, because when the Jesuit school with theater was built around 1675, both can be found again. The imperial quarry on Leithaberg received large orders, and Francesco had also learned there in 1641 from master Hieronymus Bregno . His son Giovanni Pietro della Torre , also a Prague stone mason, bought a house and quarry in Kaisersteinbruch in 1686 . 1743–1745, Johann Joseph Resler , sculptor from Vienna, and master stonemason Jacob Jäger designed the sculptural furnishings for the Jesuit Church.

Győr is home to the handball club Győri ETO KC , whose women's division won the Hungarian championship, the Hungarian Cup and the 2013 and 2014 Champions League between 2005 and 2014, and the Győri ETO FC , three-time Hungarian football champion and four-time Hungarian cup winner. The second division soccer team Gyirmót SE and Integrál DAC are also based in Győr .

Cities and municipalities in the small area Győr