This article covers the capital of Sudan. For the federal state of Sudan see al-Chartum , for the film of the same name from 1966 see Khartoum (film) . 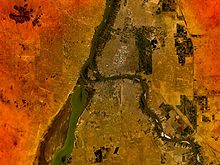 Satellite image of Khartoum with Omdurman and al-Chartum Bahri. Below left the White Nile, right the Blue Nile, at the confluence in the middle the Tuti Island

The city is located at the confluence of the White Nile and the Blue Nile .

Khartoum has almost 2.7 million inhabitants in the actual city and 8,363,915 inhabitants (2007 calculation) in the agglomeration with Omdurman and al-Chartum Bahri . This makes Khartoum the fifth largest agglomeration in Africa . According to calculations in 2012, the administrative unit of Khartoum alone had 5,827,729 inhabitants.

Khartoum was founded in 1820 by the Egyptians under Mehemed Ali as a military camp. Soon afterwards, locals settled in to intensify trade with the Egyptians. After the fall of the old trade center of Shandi , Sudan's trade was concentrated in Khartoum, which now brokered the entire trade in ivory , rubber , tamarind , ostrich feathers and slaves from Central Africa with the Red Sea .

Khartoum as seen from the Nile around 1880

At the end of the 19th century, Khartoum was described as mostly made up of miserable mud houses with narrow, crooked and dirty streets. Only the large house of the governor , which had a wide forecourt adorned with date palms , the Austrian Apostolic Mission founded in 1847, the only mosque , the Coptic Church and some houses of the trading Greeks and other Europeans , Levantines and Arabs were built of bricks . Austria-Hungary and Great Britain maintained consulates in the city and the population is estimated at around 50,000, the majority of whom consisted of Arabs - as well as slaves of African descent, Levantines, Greeks, Italians, French and British.

Under Ismail Pasha , the city was raised to the capital of Sudan and the seat of the governors-general (including Gordon Pasha and others). 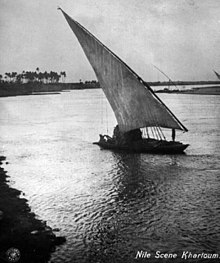 The Nile near Khartoum around 1910 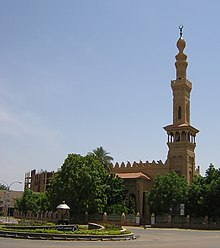 The Faruq Mosque , presented to the Khartoum population in 1947 by the Egyptian-Sudanese King Faruq

From March 1884 on, the siege of Khartoum took place in the wake of the Mahdi uprising . Two days before the British relief troops arrived, the Mahdi attacked Khartoum on January 26, 1885. In the morning 50,000 Mahdists attacked, stormed the city and killed Gordon Pasha, presumably in the governor's palace. The Mahdi founded a new capital opposite Khartoum, on the western bank of the Nile, in Omdurman . Under his successor Abdallahi ibn Muhammad , Khartoum was finally abandoned and turned into a ghost town . The city was not rebuilt until 1898, after the Mahdi revolt was put down by the British Sirdar Kitchener .

In November 1924, during the Sudan crisis between Great Britain and the Kingdom of Egypt, which had been independent since 1922, revolving Egyptian-Sudanese army battalions brought parts of the city under their control. The revolt was put down by the British.

In the 1970s and 1980s, Khartoum was the target of hundreds of thousands of refugees seeking protection from the conflicts in Chad , Ethiopia and Uganda . These settled in large slums on the outskirts of the city. Since 1983, many displaced people from Sudan have also been added as a result of the newly flared civil war in South Sudan and the Darfur conflict .

On August 20, 1998 by the Clinton - Government of the United States bombing of the Al-Shifa pharmaceutical factory in the district of the city of al-Khartoum Bahri causes, as was suspected, there would be produced for chemical weapons components.

After the death of John Garang , leader of the SPLA , riots broke out in the city on August 1 and 2, 2005, killing 75 people and injuring several hundred.

On September 14, 2012, the German embassy in "53 Baladia Street" was stormed, set on fire and partially destroyed. The nearby British embassy was also attacked.

Side street in Khartoum

The five-star hotel Burj al-Fateh in Khartoum, completed in 2007 and built by a Libyan state-owned company.

The Al-Mogran Development Project is an urban expansion project that aims to develop a new city center in the Mogran district at the confluence of the Nile and is partly based on the Dubai model .

This is a non-exhaustive list of colleges and universities in Khartoum:

This is a non-exhaustive list of secondary schools in Khartoum

In a ranking of cities according to their quality of life, Khartoum took 227th place out of 231 cities worldwide in 2018.