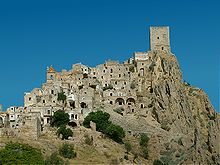 A ghost town ( loan translation from the English ' ghost town ' ) is understood to be an abandoned, uninhabited settlement . The term ghost village or ghost settlement in general is also used for smaller places . Typical ghost settlements arise through devastation and consist of slowly decaying buildings.

Settlements or agricultural areas that were historically abandoned a long time ago, are now completely destroyed or can only be found in their foundations, are called desert . Such are, for example, the Dead Cities in Syria .

There are also modern ghost settlements and towns that are being maintained for planned future settlement. B. in the course of the real estate boom in Spain and to a greater extent in China .

Ghost towns are often mining sites that were founded because of the nearby raw material deposits. Due to their monostructure , they were often quickly abandoned by their residents after the deposits - such as gold or diamonds  - were exhausted and the boom was over. Examples are the old, now abandoned diamond towns of Kolmanskop and Elisabethbucht in Namibia or many ghost towns in California's Sierra Nevada and in the gold-bearing mining regions of Nevada in the western United States . Pyramiden is an abandoned former mining town on Svalbard , Fordlândia is a failed rubber plantation .

Another reason for the emergence of ghost towns are railroad workers' settlements in rural areas of the United States, which became obsolete after the railway line was completed. A well-known example is Cisco (Utah) . 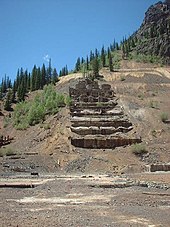 There are also “half-ghost towns” that are still inhabited by a few people who, decades after the gold rush, continue to mine for precious metals . The residents occasionally earn some money with tourists , appear as extras in films , or offer prospecting and occasional finds such as raw gemstones, weather-bleached animal skulls or oddly shaped roots for sale.

Such half-ghost towns often preserve the past like an open-air museum . Sometimes its inhabitants are the only witnesses to the eventful history of the place and its former inhabitants. Some take great care to preserve the original condition of the settlement, even though they themselves did not live to see this time. Examples of such ghost towns are Bodie , Coloma (gold) and Calico ( silver ) in California, Rhyolite in Nevada (gold), Silverton and Cracow in Australia and Sewell in Chile (copper).

Special cases are cities that had to be evacuated due to disasters.

An example of a ghost town created for political reasons was Phnom Penh , today's capital of Cambodia . In 1975, under the rule of the communist Khmer Rouge , almost the entire urban population was deported to the countryside; of the original two million inhabitants, only about 20,000 people lived in the city. Cities were considered counter-revolutionary in the ideology of the Khmer Rouge and had to be dissolved. After the Khmer Rouge was driven out by Vietnamese invading forces in January 1979, the city slowly recovered.

In Ireland , Spain and the USA there was a construction and real estate boom for a few years (see also real estate bubble , subprime crisis ), which ended with the financial crisis from 2007 and left uninhabited (partly unfinished) streets or districts. Ireland has had above-average growth rates since 2010 .

Ghost towns in the figurative sense 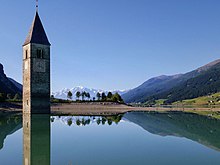 Submerged settlements that had to make way for a reservoir or open pit and were often rebuilt elsewhere ( resettlement ) are not ghost towns in the strict sense of the word . Examples are Schuleberg in the Upper Harz or Tignes in France. Contrary to popular clichés, all buildings were usually torn down before the flooding, leaving only foundation walls, remains of streets and bridge piers. An exception is the church tower in Alt-Graun in South Tyrol , which was preserved for monument protection reasons and still protrudes from Lake Reschen today .

Phantom islands such as Île de Sable ('Insel aus Sand', also Sandy Island or Sable Island, on German maps also Sable for short) are also not ghost towns - a fictional island supposedly located in the Coral Sea between Australia and New Caledonia with a supposed size of almost 120 Square kilometers.

The so-called neighborhood management is intended to counteract the emergence of ghost town-like residential areas in cities due to inner-city changes .

The Chinese city of New Ordos or Kangbashi was planned for around 300,000 people, but according to various reports it was only inhabited by around 5,000 to 30,000 people in 2011 and is therefore also known as a ghost town. This development came about when dormitory cities were built around large export-intensive companies that were only supposed to be populated afterwards, which did not work. In the hinterland, the move to the industrial centers on the coast also resulted in massive vacant properties and ghost towns.