This article covers the suburbs of a major city. For the 17th volume of the Asterix comic series, see Die Trabantenstadt .

Satellite towns (also known as satellite settlements ) are economically relatively independent settlements in the vicinity of a larger city . In contrast to the satellite city , which is predominantly dominated by the residential function, they are characterized by a higher job density and their own infrastructure. In contrast to satellite cities, the commuter balance is lower due to the fact that there are jobs available.

The definition of the terms satellite town and satellite town is controversial, whereby the more widespread classification is followed, which is also followed by Burkhard Hofmeister , the author of the standard work "Urban Geography", and which is more common internationally. Rudolf Hillebrecht and Heineberg, the author of the work “Outline of General Geography: Urban Geography”, use the two terms in exactly the opposite way.

Satellite cities and settlements are often built on “ green fields ”, that is, on areas that were not previously part of the settlement area of the city or municipality. This usually requires reallocation of land that was previously mostly used for agriculture in building land under building law ; Such re-zoning processes and the resulting often enormous increase in the value of the land or property concerned are often described with the ironic phrase “ fifth crop rotation ”. 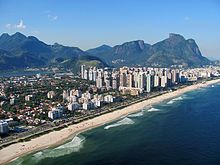 The construction of large West German housing estates was mostly started in the 1950s and 1960s due to the housing shortage after the Second World War. Large residential projects were also started in the 1970s. In some cases, such as in Nürnberg- Langwasser , the development phase lasted several decades.