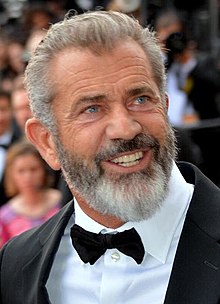 Mel Columcille Gerard Gibson , AO (born January 3, 1956 in Peekskill , New York ) is an Irish - American actor , film director and producer . He became known for roles in globally successful action films, for which he received record fees, especially in the 1990s. For his film Braveheart he received two Academy Awards in 1996 in the categories of Best Director and Best Picture and a Golden Globe , also for best director. As a filmmaker and through his personal behavior, he repeatedly sparked violent controversy.

Gibson was born the sixth of ten children of an Irish Catholic family in Peekskill , New York . An eleventh child was adopted. The father, Hutton Gibson (1918-2020), also born in the United States, moved to the TV quiz Jeopardy! After winning US $ 25,000 . 1968 with the whole family to Australia , where his wife was from. His paternal grandmother was the opera singer Eva Mylott .

Gibson was married from 1980 to 2009 to former dental assistant Robyn Gibson, nee Moore, with whom he has seven children, a daughter and six sons. In April 2009, Robyn Gibson filed for divorce because of "irreconcilable differences." It became known that the couple had been separated since August 2006. Gibson's relationship with Russian pop singer Oxana Grigoryeva was cited as the reason for the differences . With her, he had his eighth child, a girl, in October 2009. On April 14, 2010, People magazine reported that the two had split up.

Gibson has been in a relationship with author Rosalind Ross since 2014. In January 2017, Gibson became a father for the ninth time. His partner gave birth to a son in Los Angeles.

In 2005 he acquired the Fiji island of Mago in the Pacific from the Japanese company Tokyu Corporation .

Gibson made headlines several times with homophobic and xenophobic statements. In this context, his alcoholism , which has been known since the early 1990s, was also discussed. Gibson has been treated several times for his addiction. One of his verbal derailments became particularly well known when Gibson was arrested by a police patrol for drinking and driving shortly before the release of his film Apocalypto and made anti-Semitic remarks. This led to violent reactions in the media and in public to calls for a boycott of his films. Gibson then appeared on various talk shows to apologize for his behavior. He was sentenced by a court to a three-year suspended sentence for alcoholic driving, a fine of $ 1,300 and attending Alcoholics Anonymous meetings regularly . However, since he repeatedly insulted journalists and colleagues afterwards, he was unable to rehabilitate himself in public. At the end of an interview, he referred to one reporter as Asshole ; and when the Jewish journalist Sam Rubin questioned him, Gibson insinuated that he was biased (I assume you have a dog in this fight) . With the resulting negative headlines, Gibson's Hollywood career almost came to a standstill. The few films he has made since then have met with far less audience response than the previous productions.

In a 2002 interview, he stated that he had been diagnosed with bipolar disorder .

In connection with the film The Passion of the Christ , Gibson's religious attitudes were discussed publicly. Gibson had a chapel built on his estate in California in which Holy Mass is only celebrated in an extraordinary form . His father Hutton Gibson is a well-known sedevacantist and supporter of conspiracy theories , which also led to conflicts with his son.

In 2004 Gibson campaigned against research with embryonic stem cells in connection with a California referendum .

One of Gibson's sisters discovered his acting talent and led him to apply to the National Institute of Dramatic Art in Sydney . There he was able to gain first experience in several theater plays.

After a few minor roles on stage and in front of the camera, Mel Gibson got the role of a police officer in the 1979 movie Mad Max, directed by George Miller , who avenged his wife who had been killed by a rocker gang. The film, which was produced relatively cheaply even by Australian standards, became a worldwide box-office success that made its main actor known internationally and led to three lavishly produced sequels in 1981, 1985 and 2015; the latter but without Gibson's participation.

Gibson's breakthrough as a performer with romantic qualities marked Peter Weir's award-winning, melodramatic political thriller A Year in Hell , in which Mel Gibson was involved as a foreign reporter alongside Sigourney Weaver in the events of the September 30, 1965 coup in Indonesia .

He appeared in his first Hollywood roles in 1984, as Fletcher Christian in The Bounty (with Anthony Hopkins as Captain Bligh ) and as partner of Sissy Spacek in the Tennessee- based drama People by the River , a film about a farming family fighting against banks and forces of nature. 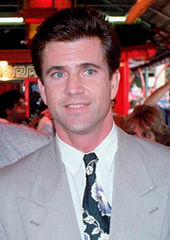 In 1987 Gibson finally got the role that made him a superstar : In Richard Donner's Lethal Weapon , he played the role of the mentally unstable, violent and self-destructive policeman Martin Riggs at the side of his cautious partner Roger Murtaugh ( Danny Glover ) . The film, with its mixture of screwball comedy and hyperkinetic excesses of violence, renewed the genre of the action thriller and led to three sequels in 1989 with LW2 - Focal Point LA and 1992 with LW3 - The professionals are back and in 1998 with the provisional last part LW4 - Two professionals clean up . A fifth part, Lethal Weapon 5 , was ready for production in 2008, but obviously failed because of Gibson's rejection, who did not want to take part without Richard Donner as a director.

As a result, Gibson consolidated his position as one of the highest-paid actors in US cinema with more action-oriented films. Films like Bounty - One Will Pay , Payback - Payday and The Patriot also became box office hits internationally. He also appeared in roles beyond the mainstream . In 1990 he was seen in Franco Zeffirelli's adaptation of Hamlet and in 2000 he played an FBI investigator in the film The Million Dollar Hotel by German director Wim Wenders .

Withdrawal and attempts at comeback

Gibson was one of the most popular Hollywood actors until the early 2000s. After leading roles in the films Signs and the war epic We Were Heroes , who again ran successfully in the cinemas, but were generally cautiously received by the critics and also with regard to Gibson's acting achievements, he announced a largely retreat from acting, to work as a producer and director. In 2010 Gibson returned to the screen after a seven-year hiatus on behalf of Vengeance , and a year later he starred opposite Jodie Foster in the film drama The Beaver . While the former was a success - albeit a comparatively modest one - the latter flopped at the box office despite very good reviews.

In 1989 he founded the production company Icon Productions together with Bruce Davey , which from then on produces his films. Mel Gibson made his directorial debut in 1993 in The Man Without a Face , in which he also played the lead role of the teacher "Justin McLeod", whose face was disfigured by a car accident. In 1995 he was the director, producer and leading actor in the historical drama Braveheart . The film garnered ten Academy Award nominations and won in five categories, including Best Picture and Best Director .

From 1992 he prepared the film The Passion of the Christ , which he then shot in Italy in 2003 , with a self-raised budget of 25 million dollars, which roughly corresponded to his salary at the time as a leading actor in a film. Gibson's announcement that the film would be shown in the original Aramaic languages and also without subtitles (which he ultimately decided to use) made its success appear doubtful in advance. In 2004, however, the film reached a place among the ten most commercially successful films to date. Mainly because of its explicit and excessive depictions of violence , however, the film sparked violent protests from various quarters.

Similarly, in 2006, shortly before the appearance of the conquistadors in the Maya realm , his film Apocalypto , which was also commercially successful, was recorded.

2016 led Gibson directed the war drama Hacksaw Ridge - The decision that the US soldiers Desmond Doss (played by Andrew Garfield ) is that in the Second World War, the armed service refused, and the Medal of Honor was awarded. The film received six Academy Award nominations in 2017 , including in the film and directing categories.

A planned directing project is the film The Maccabees about the Maccabees uprising under the Jewish freedom fighter Judas Maccabees . A first screenplay by Joe Eszterhas , submitted in February 2012, was rejected by Gibson.

Gibson owns the Icon group of companies . The subsidiary Icon Productions produced its films Braveheart , Apocalypto and The Passion of the Christ . Icon Entertainment International holds the rights to around 200 film productions. The group includes two other companies that publish and distribute films in the UK and Australia (theatrical distribution and later DVD releases). Icon Productions sells the German production Der Baader Meinhof Complex in Australia. 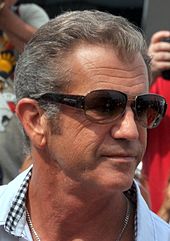 Most often he was dubbed for the German-language versions of his films by Elmar Wepper , who is considered Gibson's standard German voice. But Frank Glaubrecht and Joachim Tennstedt also regularly gave him their votes. Martin Umbach dubbed it in Blood Father . In "Dragged Across Concrete" he is dubbed by Jürgen Heinrich .

Gibson was named Honorary Officer of the Order of Australia for his services to Australian society .