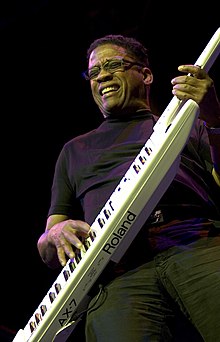 Herbert Jeffrey "Herbie" Hancock (* 12. April 1940 in Chicago , Illinois ) is an American jazz - pianist and composer and Oscar - and Grammy award winner. Hancock's improvisation is characterized by a sparkling, " funky " style of play and the use of expressive cross rhythms . Many of his compositions have become classics and serve other jazz musicians as a basis for improvisation. These include Watermelon Man , Cantaloupe Island and Maiden Voyage , all of which appeared on the Blue Note label in the 1960s .

Hancock is the son of Wayman Edward Hancock, the owner of a grocery store, and his wife Winnie Belle, b. Griffin, a secretary. When his father was to be drafted in the Second World War, he sold his shop hastily and far below its value, but was not drafted and then had to earn his living by driving taxis and buses, delivering mail and as a meat inspector for the government agency.

His parents taught him a love of music from the very beginning. At the age of seven they bought him a piano that he practiced persistently - instead of the usual sporting leisure activities at his age. The rest of the free time he devoted to scientific and electronic topics. However, his academic performance did not suffer as a result, in fact he was able to skip two classes. His teachers and mother encouraged him to listen to opera broadcasts on the radio, which allowed him to deepen his understanding of music and piano playing.

At the age of eleven, Hancock performed Mozart's 5th Piano Concerto in D major with the Chicago Symphony Orchestra . He also played jazz , which he finally devoted himself to. During his high school years he listened to recordings by Oscar Peterson and George Shearing for hours , transcribed their grades on paper, and then replayed them. This lengthy exercise improved his ability to analyze and dissect harmonic structures, rhythmic patterns and ways of instrumentation. After high school, he enrolled at Grinnell College in Iowa in 1956 to study electrical engineering. He learned the basics of electronics there, but after two years he switched to music composition, which he graduated in 1960. He then returned to Chicago and played with Coleman Hawkins , among others . Due to a devastating snow storm, the pianist from Donald Byrd's group was unable to get to Chicago in time for Hancock to stand in for him. Byrd was so impressed that he took him to New York City and introduced him to his jazz colleagues there.

In 1962 he was able to record his debut album Takin 'Off with well-known musicians such as Dexter Gordon and Freddie Hubbard on the Blue Note label. This record also featured Watermelon Man , one of his most popular pieces ever, which became a hit in the version of the percussionist Mongo Santamaria . To date (2020) the piece has been recorded by more than 200 musicians. In 1963 Hancock was next to George Coleman (later replaced by Wayne Shorter ), Ron Carter and Tony Williams member of the famous second quintet by Miles Davis , in which he remained until the summer of 1968. He was first heard in 1963 on the album Seven Steps to Heaven . Looking back on his collaboration with Davis, he said:

“I was twenty-three. And Miles scared me. Great fear. We had to surpass ourselves, keep pushing our best. Miles asked a great deal, but hardly directed. He gave us the freedom to do what we wanted. He changed my life and gave me a lot of courage. "

Hancock worked on albums of the quintet such as ESP , Miles Smiles , Nefertiti and Sorcerer in the mid-1960s . For the album Miles in the Sky (1968) Davis bought his pianist a Fender Rhodes and ushered in the era of jazz rock .

But he continued to regularly record well-known records under his own name, including the classic Maiden Voyage . He has also accompanied many other musicians, such as Hank Mobley ( No Room for Squares , 1964), Wayne Shorter ( Speak No Evil , 1964), Lee Morgan ( Search for the New Land , 1964) and Bobby Hutcherson ( Happenings , 1966). He then formed his own sextet, which, however, was not commercially successful and was partially financed by Hancock through royalties for his compositions. In the late 1960s the general interest in jazz waned , so that Hancock now also composed advertising jingles for Chevrolet, Standard Oil and Eastern Air Lines . The film director and jazz connoisseur Michelangelo Antonioni successfully asked him to compose the score for his feature film Blow Up . 1969 ended the collaboration with Davis in the Bitches Brew plant .

Hancock experimented briefly with LSD in 1965. He has been a Buddhist since 1972 and a member of the new religious movement Sōka Gakkai International . From 2010 to 2011 he conducted a series of conversations about jazz and Buddhism in Japan with the Buddhists Daisaku Ikeda and Wayne Shorter , which later went into the American ( Reaching Beyond: Improvisations on Jazz, Buddhism, and a Joyful Life , 2016) and into German (2018) have been translated.

1969 put Hancock on the Swahili name Mwandishi (Eng. "Composer"); At the end of the year the album Kawaida was created , which was initially released under the name of the drummer Tootie Heath . He was also involved in Miroslav Vitouš 's album Infinite Search . In the 1970s, Herbie Hancock increasingly used electrical and electronic instruments such as the Fender-Rhodes piano, the Hohner D6 and various synthesizers , such as the Hohner D6 , to expand his sound spectrum . B. the ARP 2600 . Hancock is a downright technology freak who always adapted the latest available technology - from the vocoder to the first Moog and Korg synthesizers to the latest laptop.

At the time, Hancock also declared that he loved funk music, especially that of Sly Stone , and formed a sextet that was financially a disaster; he financed the band for four years from the royalties on his hit Watermelon Man . His album Fat Albert Rotunda (1970), a first attempt on the funky wave for a TV special by Bill Cosby , was followed by benchmark albums such as Mwandishi (1971) and octet-cast Sextant (1973). In 1973 he started his funk band The Headhunters , which also included Bennie Maupin from his former sextet, bassist Paul Jackson , percussionist Bill Summers and drummer Harvey Mason . The best known from this period is the 1973 album Head Hunters , which is one of the most successful albums in the history of jazz. Other examples are Thrust , Sunlight , Monster , Mr. Hands (with Jaco Pastorius ) and Man-Child .

In 1983, Hancock worked with Bill Laswell on the Future Shock album . With the release Rockit he had a worldwide hit (the greatest instrumental hit of the 1980s); he got a Grammy for the single that made scratching popular. In 1985 he recorded the duo album Village Life with Foday Musa Suso , an African kora player.

Parallel to the increasingly electronically dominated albums and bands, the formation of the second Miles Davis quintet under the name VSOP came together in the mid-1970s around Herbie Hancock , with Freddie Hubbard replacing Miles Davis as trumpeter. In 1986 he starred with Dexter Gordon in Bertrand Tavernier's jazz film At Midnight , for which he also wrote the Oscar- winning soundtrack . Various acoustic recordings were made in the 1990s, including a tribute album in honor of Miles Davis ( A Tribute to Miles ), a duo recording with Wayne Shorter ( 1 + 1 ) and an album on which he was with an acoustic quintet Pop hits reinterpreted as new jazz standards ( New Standards ). In 2005 the album Possibilities was released , on which he can be heard together with pop artists such as Sting , Paul Simon , Carlos Santana , Damien Rice and Annie Lennox . In the same year he also played the piece Spanish Suite with Stephen Stills . It contains a seven minute piano / guitar improvisation and was featured on Stills' album Man Alive! released.

He reached a new audience in 1994 due to the success of his song Cantaloupe Island , which was covered or remixed by Us3 . For his 1996 album The New Standard , Hancock used pop songs by Peter Gabriel , Kurt Cobain and Joni Mitchell . Hancock covered a Prince song back in 1990 . In 2008 he won two Grammy Awards with the album River: The Joni Letters , a tribute to jazz-loving songwriter Joni Mitchell ; In addition to the category Best Jazz Album, also the award for Best Album of the Year . "Sextant" was included on The Wire's legendary wirelist "100 Records That Set the World on Fire (While No One Was Listening)" .

His autobiography Possibilities (2014), written with the help of Lisa Dickey, topped the JazzTimes '2014 Readers' poll .

Hancock has been married to the German decorator and art collector Gudrun "Gigi" Meixner (* Stendal ) since August 31, 1968 ; they have a daughter, Jessica. Hancock's sister Jean, a songwriter and computer analyst, died on the afternoon of August 2, 1985, at the age of 41, in an airplane accident at Dallas Airport .

In 1973 Hancock moved from New York to Los Angeles and bought a house in the Beverly Hills neighborhood for $ 72,000 on Doheny Drive (1254 North Doheny Drive), where he and his family still live today. 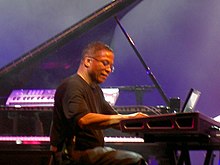 Hancock at the Munich Tollwood Festival , 2006