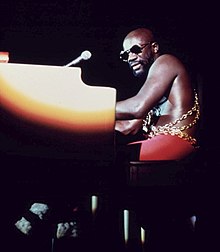 Funk is the generic term for a variety of originally Afro-American music that developed in the late 1960s from various influences of soul , rhythm and blues and jazz and, in turn , strongly shaped and influenced musical styles such as disco , hip-hop and house . Essential stylistic features of the original funk are a repetitive basic rhythm, which polyrhythmically combines the offbeat common in all R&B styles with an emphasis on "one" , syncopated bass lines as well as accented brass sections and rhythm guitar in interaction with soul singing. Another characteristic of funk was a bass line on par with the vocals in terms of conciseness and melody, perhaps the most outstanding innovation of funk. The underlying idea that every instrument and also the vocals were understood as rhythm instruments, had the effect that the drums in classic funk music are used in a strikingly minimalist and dry way. Funk first achieved greater popularity through the music of James Brown and Sly Stone .

The meaning of the term “funk” goes back to Afro-American slang of the 1950s, in which “funky” was a synonym for “earthy”, “dirty” or “excited”. The initial meaning of the word was smoke, bad smell. The term appears for the first time in connection with Afro-American music around 1900 in a proto-jazz piece by Buddy Bolden (which has not been recorded in recordings) , which, according to tradition, was entitled either "Funky Butt" or "Buddy Bolden's Blues" ( a fixed title cannot be assumed for this time), whereby the “funky butt” (stinky butt) in the text referred to the sweaty drink atmosphere in the dance halls where Boldens band played.

The term “funky” appeared in jazz as early as the 1950s and 1960s , for example in Horace Silver's composition Opus de Funk (1954), Kenny Drew's Funk-Cosity (1960), Hank Mobley's Funk In Deep Freeze and Clark Terry's Funky ( both from 1957). At that time - for example by Carlo Bohländer - soul jazz was understood as a funky jazz game. One of the first bands to release funk songs beyond jazz was the Isley Brothers . However, funk has only been defined as an independent music genre since the late 1960s, when musicians and bands such as James Brown , Sly & the Family Stone , Tower of Power and The Meters helped this style to break through. 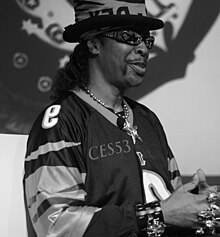 As is often the case in music, there is a dispute about the origin of a musical style, as is the case with funk. But if you look at the history of this musical style, taking into account the point in time when it became widely popular, you will probably have to name James Brown and Sly Stone before everyone else, who already then established the basic ingredients for funk with the stylistic means mentioned. In principle, in the history of western pop music, funk is the first moment in the musical ranking (in relation to the melody) the rhythm increasingly came to the fore. The rather subordinate accompanying rhythm became, syncopated, the main musical element. The birth of funk is therefore largely determined by the publication of the title Papa's Got a Brand New Bag by James Brown in 1965. He determined the way of playing an instrument, such as the slap technique on bass by Larry Graham (then bassist with Sly Stone, as can be seen in the Woodstock film ) or Bootsy Collins (then bassist with James Brown), the engraved brass parts of Maceo Parker ( saxophone ) and Fred Wesley ( trombone ), who together with other winds formed the "JB's" with James Brown and the "Horny Horns" with George Clinton .

All of this found its origin at this time and was carried out into the world in new projects by these same musicians when they left the bands. Many musicians, mostly from the Afro-American population of America, were inspired by these roots, and so by the late 1960s countless funk bands were already on the stage. The music scene in Dayton , Ohio was influential . Originally also an expression of Afro-American consciousness, with great influence from James Brown, funk was increasingly commercialized over the years, also due to changed production techniques ( synthesizers , drum computers ), and so the mainstream within funk ended up in disco music . Some musicians recognized this development very early on, turned away and founded subspecies of funk, such as George Clinton the P-Funk with the bands Parliament and Funkadelic , who developed their own world with their own characters that they used during their performances embodied the stage themselves ( P-Funk mythology ) .

The stage shows and outfits of funk bands also found their origins in those of James Brown. From uniforms to wide, casual and colorful outfits to uniform skin-tight overalls that were completely embroidered with sequins - and even to such elaborate costumes as are usually only worn at the Carnival in Rio. Parliament in particular were known for their shows in which complete UFOs landed on the stage and the most bizarre characters, above all the “Starchild” (see P-Funk mythology ), began their mission to bring funk to the people (“Spread the Funk worldwide ") .

Over time, stylistic islands formed in funk, which with their very own sound more and more clearly differentiated themselves from the others. Funk rock, funk pop, jazz radio and other branches emerged and are still very popular today, although commercial success has seldom set in. Although funk historically reached its peak from the late 1960s to the mid 1970s, it has to be said that it is still widespread to this day and, in both a modified and original form, forms the basis for many subsequent styles, such as hip -Hop and the New R&B . Many super and megastars of the 1980s and 1990s, such as Prince , named funk as their origin and continued it in new styles, thus making it accessible to a broad audience in the white population.

In 2018, the Funk Music Hall of Fame and Exhibition Center opened in Dayton, Ohio to showcase the evolution of the style.

Funk in conjunction with other genres 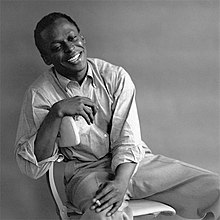 From the beginning, funk and jazz influenced each other. Jazz musicians such as Herbie Hancock , Miles Davis , Marcus Miller , George Duke , Stanley Clarke , the brothers Michael and Randy Brecker and many others repeatedly attracted attention with their funk productions. Jazz standards were often interpreted as funk pieces. Herbie Hancock, in particular, gave funk a new direction in the mid-1970s with his band Headhunters and had a pioneering role in the connection of funk with other musical styles, such as electronic music and hip-hop.

Strong influence on Miles Davis' musical tastes had his then wife Betty Davis who Jimi Hendrix was one of their favorite musicians and introduced him to the music of Sly Stone. Betty Davis herself is often referred to as the "Queen of Funk" and was a successful funk musician herself in the 1970s.

The mixture of jazz with funk and rock music is called fusion , although a distinction was previously made between jazz rock and jazz radio . Since the late 1980s, the British bands Brand New Heavies and Jamiroquai have relied on acid jazz , which, like funk, also often emphasizes the rhythm of the one.

The Nigerian musician Fela Kuti combined funk and soul with African music in the 1970s . This style is known as afrobeat .

Since the mid-1970s, rock bands like Mother's Finest began to expand this concept and developed funk rock . In the early 1980s, several rock bands took up funk and made it popular with a white audience, such as The Clash ( Overpowered by Funk on Combat Rock ), Talking Heads ( Remain in Light , Speaking in Tongues ), Gang of Four and Level 42 . Extreme , Jane's Addiction , Fishbone , Dan Reed Network and the Red Hot Chili Peppers developed funk rock or funk metal , which was later called crossover due to the expansion of the styles . Other founding fathers of this genre from the 1990s are Faith No More and Living Color .

The original hip-hop , the so-called Old School the late 1970s and early 1980s has, in principle, a large number of radio-elements because at the time the sampling or importing plate the basis for the toast of the Rappers formed. The funk, with its distinctive rhythm, was ideal for rap speaking singing . However, after the music industry's legal battle against the unlicensed use of samples, hip-hop music changed significantly. The studios developed their own beats or even made the effort to record the desired parts themselves, although a large number of mediocre productions made themselves felt. Today there are some artists again who put more emphasis on funk.

A sub-style of hip-hop that is strongly oriented towards funk is G-funk . Representatives of this genre are, for example, Eazy-E , Dr. Dre , Snoop Doggy Dogg , Above the Law , Tha Dogg Pound , The Dove Shack , Warren G, and Nate Dogg .

A separate variant is Electro Funk , which continued the funk of the seventies with electronic means and was only weakly differentiated from electro , which the New York hip-hop DJ Afrika Bambaataa founded in the 1970s and especially the 1980s, especially with his style-forming Hit Planet Rock (1982). He was strongly inspired by the German band Kraftwerk .