Dan Reed Network is an American rock band from Portland , Oregon , founded in 1984 by Dan Reed and Dan Pred , which became known in Germany for their hits Get to You and Ritual (both 1987). In 2007 the group was honored by being inducted into the Oregon Music Hall of Fame . 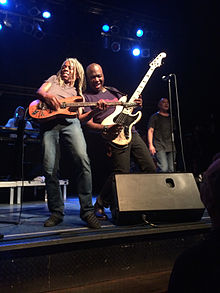 Dan Reed (born February 17, 1963, Portland, Oregon) met Dan Pred in high school in Aberdeen , South Dakota . After some time at Northern State University , where both studied music, they returned to Portland in 1984 and formed the group that was named Dan Reed Network . In 1985 they released the single Eye On You (Tandees Records), the only known recording that featured original keyboardist Jeff Siri. The single was a little later part of the compilation Pride Of Portland , which was supposed to bring in donations for the hungry in Africa in the style of USA for Africa , but only presented local artists from the Portland region and was only sold there. Dan Reed sang a line of text on the theme song Pride of Portland . In 1986 they recorded their first record, a six-track EP called Breathless , one song of which, Steal Me , became the number one single on local Portland music network Z-100. Eye On You was also included on the EP, but was re-recorded with keyboardist Rick DiGiarllonado.

At the time the band consisted of Dan Reed (vocals and guitar), Brion James (guitar), Melvin Brannon II (bass), Dan Pred (drums) and Rick DiGiarllonado (keyboards). The different origins of the group members (Reed has German, Hawaiian and Indian ancestors, James and Brannon have African American roots, while Pred and DiGiarllonado have Eurasian ancestors) were reflected in the music, which was basically hard rock, but always had elements of soul , Funk and jazz. DiGiarllonado was soon replaced by Blake Sakamoto on keyboards; Sakamoto had returned from Los Angeles, where he had played in the Dear Mr. President group .

Dan Reed Network quickly made a name for itself mainly through live performances. The Washington Post described the group's performance as “winning their audiences very easily with an unusual mix of heavy metal-esque rock fueled by funk and loads of rock and roll. The strength of the 'Network' lies in its infectious temperament. "

With the help of Derek Shulman , the band received a recording contract with Mercury Records , and the management was taken over by concert promoter Bill Graham , of German origin . In the winter of 1987 the group released their debut album Dan Reed Network, produced by Bruce Fairbairn at Little Mountain Sound Studios in Vancouver . The first single, Ritual , cracked the Billboard Top 40 (No.38 on May 7, 1988) and ran on MTV USA on heavy rotation . The song stayed in the Hot 100 for a total of eleven weeks.

The band went on a club tour of Europe in 1988, starting in Stockholm and ending in London at the famous Marquee Club .

The lack of promotion for the album hindered a resounding success in the USA (# 95 on the Hot 100). Def Leppard's Hysteria did not achieve the sales figures that Mercury / Polygram had hoped for and the label therefore withdrew support from newer artists in order to concentrate on re-establishing the British rock band on the American market. Ironically, it was Def Leppard's managers Cliff Burnstein and Peter Mensch who offered the Dan Reed Network the role of heat-up for the final part of the Hysteria tour in the US if they would switch to their management company Q-Prime in return . The band initially hesitated to fire Graham, but in early 1989 they signed a management contract with Q-Prime and enjoyed their greatest success in the United States.

The band's second album, Slam , was produced by Nile Rodgers , who managed to capture the group's live sound, creating a more authentic Dan Reed Network album than the too smoothly produced debut album.

In the winter of 1989, the group toured as support for Bon Jovi on their New Jersey tour. The success of this tour led the Rolling Stones to select Dan Reed Network to provide main support for their first tour in ten years, the Urban Jungle / Steel Wheels tour of Europe and the UK in the summer of 1990, so the Dan Reed Network suddenly came forward Tens of thousands of rock fans played, including on August 13th and 14th in Berlin-Weissensee, which at that time still belonged to the GDR , and on August 16th in the Park Stadium Gelsenkirchen. Dan Reed Network could also be seen at two German festivals where David Bowie and Midnight Oil also appeared, namely at the Schüttorf Open Air on September 1 and at the festival in Ulm on September 2, 1990.

The band's third album, The Heat (1991), was produced again by Bruce Fairbairn , with the exception of the song Money (a cover version of the Pink Floyd song).

At number 15 in the UK charts, it was also the band's most successful album in Great Britain. In the US, on the other hand, they had no idea how to promote and market the Dan Reed Network, so The Heat did not show up in the charts there. The band went on without the support of their record company and toured Australia (supporting Baby Animals). The following tour through Europe and Great Britain in the summer of 1993 was also her last. The band's last concert took place on August 8, 1993 at The Garage club in London. In October, the members of the Dan Reed Network began to concentrate on other projects and tasks, but they agreed to only interrupt their career together, but not to break up the band.

Melvin Brannon became a member of the band around Stevie Salas and was involved in the production of six albums between 1996 and 1999, Brion James worked with Amanda Hayley.

There are several demos, mainly by Dan Reed, which were recorded in 1992 for the follow-up album to The Heat . However, none of the recorded titles can be found on later releases.

Between 1993 and 2002, the compilation albums The Best of Dan Reed Network - Mixin 'It Up (1993), Live at Last! Released Halfway Around the World and The Collection (2002). In 2007, Dan Reed Network was inducted into the Oregon Music Hall of Fame. Dan Pred and Blake Sakamoto accepted the award.

On December 31, 2012, the band played together for the first time since 1993. It should be a one-time appearance on the occasion of the group's 25th anniversary. In March 2013, after the release of his album Signal Fire , Dan Reed announced that the Dan Reed Network was planning another gig for October 2013 to take place in the UK. In July 2013, Dan Reed announced via Facebook that the band would make a total of five appearances in Europe between October 10 and 19 of that year, two of them ( Mannheim and Hamburg ) in Germany. Numerous concerts were recorded during this tour, some of the recorded tracks were used for the 2014 album Anthology .

The band continued their live activities afterwards, and for the end of 2015 they also announced the start of recordings for a new studio album. However, Blake Sakamoto no longer took part in the recordings for this album. He had announced his retirement from the group's ongoing obligations in October 2015 for family reasons and was replaced by Rob Daiker, who belongs to Dan Reed's solo band.

The group is working again with Derek Shulman, who again took over the role of A&R manager and co-manager, and signed a record deal with Frontiers Records . The album recorded for Frontiers entitled Fight Another Day was released on June 3, 2016. The first single was the song Divided .

Dan Reed Network's music was also featured on film soundtracks. These included Poison Ivy ( The Salt Of Joy & Let It Go ), The Cutting Edge (1992, Baby Now I ) and Excessive Force (1993, Mixin 'It Up) ; two solo tracks by Dan Reed, namely Welcome To The Real Life (written by Dan Reed and Traci Kiss) and Burn With Me , both of which are very reminiscent of the Dan Reed Network sound.

In addition to the aforementioned Pink Floyd Cover Money , Dan Reed Network also recorded their own version of the hit You Can Leave Your Hat On .

But Dan Reed Network songs by other artists were also recorded: In 1997 a sampler was released in Australia with the title A Bouquet of Barbed Wire , on which the gothic rock band Meridian was represented with the network hit Ritual . Also in 2004 guitarist Neil Zaza released his version of Forgot To Make Her Mine on his album Melodica . This instrumental recording was made around 2001 and was made with Blake Sakamoto, Daniel Pred, Brion James and Melvin Brannon. Unfortunately, Neil Zaza didn't manage to win Dan Reed for a spoken intro ( "Hey Neil, gimme some of that guitar" , which was also used on the original song). Rob Daiker, who still works with Dan Reed and is co-producer of his album Coming Up For Air , was also involved in the recording .