Wayne Shorter (* 25 August 1933 in Newark , New Jersey ) is an American jazz - saxophonist and - Composer . With John Coltrane and Sonny Rollins he belongs to the "front line" of saxophonists in modern jazz . "His game is characterized as poetic, enigmatic and at the same time natural and completely logical in itself." 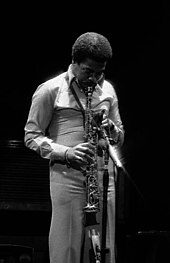 Shorter initially played for Horace Silver and Maynard Ferguson before joining Art Blakey's Jazz Messengers in 1959 . He became their musical director before he was poached by Miles Davis in 1964 on the recommendation of John Coltrane . He also released mostly highly acclaimed albums under his own name, such as Night Dreamer in 1964 as his first album for Blue Note . From 1964 to 1969 he was - alongside Herbie Hancock , Ron Carter and Tony Williams  - a member of the second "classic" Miles Davis quintet, for which he wrote many compositions that became classics, including the pieces "Footprints" and "Nefertiti ". Shorter was the right successor to John Coltrane, Davis' group, which was further supported by the fact that he at Blue Note at the time under his name a quartet plate with Coltrane's companions McCoy Tyner and Elvin Jones grossed (Juju) .

In 1970 he founded the legendary jazz-rock formation Weather Report together with keyboardist Joe Zawinul and bassist Miroslav Vitouš, to which Jaco Pastorius and Peter Erskine later also belonged. Shorter's extensive change from the tenor saxophone , which he had only played until 1968, to the soprano saxophone and lyricon also occurred in the time of the early Weather Report . Since 1976 he has been playing acoustic jazz again with VSOP .

Since the dissolution of Weather Report (in the opinion of Joachim-Ernst Berendt "the most successful of all jazz-rock groups") Shorter has worked as a soloist. He has accompanied Carlos Santana and the Rolling Stones on tours and played on several albums by Joni Mitchell and with Steely Dan . He now leads a highly acclaimed quartet with pianist Danilo Pérez , bassist John Patitucci and drummer Brian Blade (CDs: Footprints Live! Beyond the Sound Barrier and Without a Net ).

In 1985 Shorter's daughter Iska Maria (* 1971) died after an epileptic attack. In 1996 Shorter's wife Ana Maria (* 1947) and her niece Dalila Lucien, the then 17-year-old daughter of the singer Jon Lucien , died in the TWA-800 plane crash off Long Island. In 1999 Shorter married the Brazilian singer Carolina Dos Santos, a close friend of his late wife, in their third marriage. Shorter is an avowed Nichiren Buddhist and supporter of the new religious movement Sōka Gakkai .