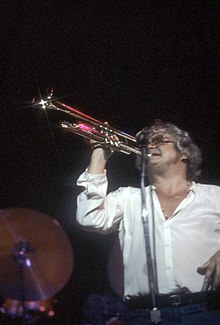 Walter "Maynard" Ferguson (born May 4, 1928 in Verdun (now part of Montreal ), † August 23, 2006 in Ventura , California ) was a Canadian jazz trumpeter and flugelhorn player . He was considered a "high-note" specialist and was famous for his large range.

Ferguson discovered his love for music at a young age. Encouraged by his parents, he learned the piano and violin from the age of four. At the age of nine he discovered the trumpet for himself and at the age of 13 he was already performing with the Canadian Broadcasting Corporation Orchestra , and at 15 he played with his own band as the opening act for traveling bands. Before he played his famous skyscraper cascades on the trumpet, however, he also made a name for himself as a veritable valve trombonist . However, he finally decided on the trumpet. With his energy and virtuosity he drew the attention of various famous band leaders and was finally accepted into the Stan Kenton Orchestra at the age of 22 , in which he played from 1950 to 1953, as on his album New Concepts of Artistry in Rhythm . In the mid-fifties he founded his first orchestra, which saw itself in the tradition of Basie classicism and made swinging, simple, blues and beat-oriented, but still vital and exciting instrumental jazz. 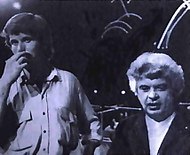 He then turned to film music and recorded some soundtracks for Paramount Pictures . In Hollywood he had also played with West Coast jazz musicians . He also played in the New York Philharmonic Orchestra under Leonard Bernstein William Russo's The Titans .

In the 60s and early 70s Ferguson lived in Spain, England and India and toured with his own bands, e. Sometimes even big bands. His version of MacArthur Park became famous, and assignments drew him back to his homeland. In 1974 he decided to return to the USA. With Gonna Fly Now from the US movie Rocky , in the then trendy disco sound, he celebrated his final breakthrough as a jazz trumpeter suitable for the masses, because the single reached the American Top 40, the accompanying album Conquistador got gold, and he became 1978 nominated for a Grammy .

For a long time Ferguson was the high-note trumpeter par excellence in jazz . He also plays the trombone, but was only significant in this area as a co-developer of a combined valve slide trombone. In 1997 he was inducted into the Canadian Music Hall of Fame in recognition of his achievements .