New Concepts of Artistry in Rhythm

New Concepts of Artistry in Rhythm is a jazz album by Stan Kenton . It was recorded for Capitol Records from September 8-16, 1952 , and released in 1953.

When West Coast bandleader Stan Kenton recorded New Concepts of Artistry in Rhythm , he worked with a 21-piece orchestra that he had formed after the commercial fiasco of his previous Neophonic Orchestra . The most famous West Coast musicians of the time played here in 1952 , such as trumpeter Maynard Ferguson , trombonist Frank Rosolino , alto saxophonist Lee Konitz , tenor saxophonists Richie Kamuca and Bill Holman as well as Sal Salvador on guitar and swinging drummer Stan Levey .

The album contained music specially written for this "excellent Rosolino Konitz band" ( Brian Priestley ), such as "Inventions for Guitar and Trumpet" by Bill Holman and other pieces by arranger and trombonist Bill Russo and Gerry Mulligan , Johnny Richards and Shorty Rogers . After Richard Cook and Brian Morton, it is considered one of the best Kenton albums with one of his best bands; "They capture the energy and fire of one of Kenton's most swinging bands." "It was a dramatic production, with dissonant and experimental elements, and thundering phrases similar to the Hollywood film scores customary at the time ; like the bombastic" Prologue: This is an Orchestra! "With Kenton as the narrator who introduced the individual band members, including the Personalities of the musicians, which with Frank Rosolino (who is meant in Russo's Frank Speaking ) gets a tragic note in (much) later retrospect, when Kenton said: "This fellow who has few of any moody moments." Cook and Morton raise the heavyweight brass section of the band stand out, as well as the hard swinging rhythm section , "and there are some wonderful soloist interjections in almost every piece, like Sal Salvador in" Invention ", from Konitz in" Young Blood "and" My " Lady ", by Rosolino at" Swing House ".

By the way, Portrait of a Count doesn't mean Count Basie , but Conte Candoli .

The original LP, which was released in the 1950s, was later added to the "Prologue"; previously this was available on two sides of a 78 record. The tracks " You Go to My Head ", "Taboo", "Lonesome Train" and "Swing House" were not included on the original 10-inch album. 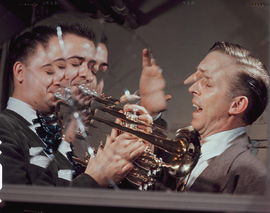