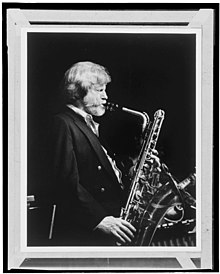 Gerry Mulligan in the 1980s.
Photography by William P. Gottlieb

Mulligan was born in Queens, the youngest of four sons, but moved frequently with the family (father was an engineer). He learned and played the clarinet and tenor saxophone in school orchestras in the late 1930s , and he also played the piano. He did not find the baritone saxophone until 1947 in New York, where he had moved in 1946. In 1943 he played tenor saxophone with Charlie Parker and Dizzy Gillespie when they visited Philadelphia , where Mulligan arranged for Elliot Lawrence's band . He arranged for Tommy Tucker in 1944 and was a member of Gene Krupa's band from 1946 ( whose orchestra he helped to achieve commercial success with “Disc Jockey Jump”), then with Claude Thornhill . He took 1948 to 1950 at several central images of New York cool jazz part (especially with the Capitol Orchestra of Miles Davis , where he also accounted for half of the pieces of the Birth of the Cool supplied the arrangements recordings), but remained a marginal Musician.

Due to drug problems he tried a fresh start in California in 1951 , where he - as a composer, arranger and band leader - provided central impulses for the development of West Coast jazz . He arranged for Stan Kenton (including “Youngblood, Swing House” and “Walking Shoes”) and played with Kai Winding . He used a simpler, singable melody (in comparison with Lee Konitz, for example ). In 1951 he also made his first record as Leader ( Mulligan plays Mulligan ).

His playing with the trumpeter Chet Baker at The Haig in Los Angeles in 1951/52 made him particularly popular with students. In 1953 he founded a piano-less quartet with Baker (with different rhythm groups, e.g. with bassists Bob Whitlock or Carson Smith and drummers Chico Hamilton or Larry Bunker ), to which Lee Konitz's alto saxophone was added at times. Unlike in bebop and cool jazz, they used a much simpler melodic material. Like the themes, Mulligan's and Baker's improvisations were unusually simple and catchy - without giving up any intellectual claim. Mulligan wrote jazz history with the conception of this combo without a harmony instrument . Unacademic contrapuntal lines were also new, not only in the presentation and repetition of the theme, but also in the choruses of the soloists. Another drug affair put an end to his imprisonment in 1953 until the quartet was re-founded in 1954.

When Baker, meanwhile built to a star at Pacific Jazz, wanted a pay increase after his return, Mulligan separated from him and replaced him with Bob Brookmeyer , later also by Jon Eardley . In 1954 he had success with his combo in the Pleyel Hall in Paris , heard on the Vogue album Pleyel Concert , and at the first Newport Jazz Festival (jam session with Eddie Condon ). Later he also appeared regularly at the Newport Jazz Festival, so in 1957 and 1958, where he can be seen in the documentary Jazz on a summer evening . In 1955 and 1956 he formed a sextet out of the quartet (with Brookmeyer and Zoot Sims ), with which he successfully toured Italy and France in 1955. He also recorded records with Thelonious Monk ( Mulligan Meets Monk , 1957) and Stan Getz and, after a tour of Australia with Jazz at the Philharmonic, founded a new quartet with Art Farmer , Bill Crow and Dave Bailey .

From the late 1950s he wrote film music, initially for the Oscar-winning film " Let Me Live " (I want to live, 1958, directed by Robert Wise , with Susan Hayward ); then he starred in the films Subterraneans and Bells Are Ringing . He also continued his series of "Gerry Mulligan meets" records, among which the one with Ben Webster (1959) deserves special mention. In 1960 Mulligan founded his 13-member Gerry Mulligan Concert Jazz Band , which became the leading big band of the early 1960s on records (with Verve) and live; not least thanks to the exceptionally refined and aesthetic compositions of Gary McFarland . Mulligan performed at the White House in 1964, attended Japan and major festivals; In 1965 he performed the Music for Bar Sax and Orchestra he composed with Stan Kenton and the LA Neophonic Orchestra . After touring with a new combo (from 1966) he worked as a film composer, arranger and soloist. For example, he was a guest soloist with Dave Brubeck from 1968 to 1972 and again in 1979, to be heard a. a. on “Blues | Roots” and “Live at the Berlin Philharmonie” (recorded in 1970 at the Berlin Jazz Festival ) ( he had already recorded with Brubeck's alto saxophonist Paul Desmond in 1957). There were also new meetings with Chet Baker (at Carnegie Hall 1974) and Zoot Sims. He also worked with Stan Getz , John Coltrane , Jim Hall , Mel Tormé and Nina Simone . In 1971 he composed The Age of Steam for big bands.

In the 1970s and 1980s he played with Astor Piazzolla Tango Nuevo on the album Summit , made guest appearances with Charles Mingus and Friends in Concert in 1972 , toured a lot in Europe and the USA and was recognized as a timeless classic: in 1982 Mulligan performed at the invitation of Zubin Mehta with the New York Philharmonic Orchestra . As a bass saxophone, he also acted in the 1979 released album Mingus by Joni Mitchell with. On the album Little Big Horn (1983) he presented himself in a fusion environment, with Soft Lights and Sweet Music (1986) together with Scott Hamilton . In 1988 he accompanied the presentation of Yves Saint Laurent's perfume “Jazz” with his baritone lines . In 1992 he initiated the big band project Rebirth of the Cool .

Mulligan had a son with his first wife Arlyn Brown (* 1957). From 1959 he lived with the actress Judy Holliday (who also appeared as a singer with his band in the early 1960s), but who died in 1965. He then dated the actress Sandy Dennis and married his last wife Franca after their separation in 1976. He died in 1996 due to an infection after knee surgery.

Since 1953 he led the polls of jazz magazines, initially often as arranger and until 1995 almost every year as a baritone saxophonist. In 1994 he was inducted into the down-beat "Hall Of Fame".

The album Mulligan Moods (2008) by Jan Menu presented an homage to his compositions .