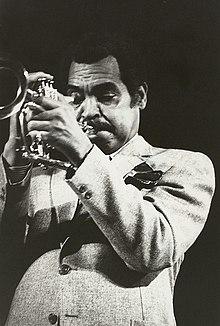 Arthur Stewart (Art) Farmer (born August 21, 1928 in Council Bluffs , Iowa , † October 4, 1999 in New York ) was an American jazz trumpeter . He also played the flugelhorn and flumpet , a combination of trumpet and flugelhorn.

Art Farmer, whose twin brother Addison, who died in 1963, was a well-known bassist, grew up in Phoenix, Arizona and first learned violin and piano . At first he only played the trumpet and sousaphone on festive occasions (flag roll calls) and in a marching band . At the age of 15 he started playing the trumpet in a dance orchestra. Farmer moved to Los Angeles with his brother , where he got to know the jazz scene and played in Horace Henderson's and Floyd Rays Jump Band . He also went on tour with Johnny Otis .

With Otis' band he came to New York for the first time in 1947 and played as a freelance musician with Clifford Brown , Lester Young and others. During this time he also studied with Maurice Grupp . In 1948 he played in Jay McShann's band in Kansas City , then returned to Los Angeles and played in the bands of Benny Carter , Gerald Wilson , Roy Porter and Dexter Gordon . In January 1952 the first recordings were made with Wardell Gray for the prestige label . Farmer's composition, Farmer's Market , was also recorded.

In 1953 he became a member of Lionel Hampton's Big Band and went on tour with them in 1953. That year his first session for Prestige also took place; it was the 10-inch LP Work of Art , with arrangements by Quincy Jones , who also participated as a pianist.

Farmer then formed his own formation with saxophonist Gigi Gryce , which existed from late 1954 to mid-1956 ( Nica's Tempo , 1955); later he also played with Coleman Hawkins , Thelonious Monk , Charles Mingus , Art Blakey / Horace Silvers Jazz Messengers , Quincy Jones ( This Is How I Feel About Jazz ) and from 1958 in Gerry Mulligan's quartet . With him he was involved in the score for I Want to Live and The Subterraneans (1958). At the same time he also dealt with experimental jazz styles, for example with Teddy Charles , Teo Macero , and George Russell , which earned him the reputation of being able to play anything, to be heard at George Russell's The RCA Victor Jazz Workshop . In the 1960s he and the saxophonist Benny Golson achieved this with u. a. Curtis Fuller and McCoy Tyner founded Jazztet legendary celebrity. After its dissolution, he led various quartets, such as with Jim Hall until 1964 , with whom he recorded the album Live at the Half Note in 1963 . He then worked with Steve Swallow , Steve Kuhn and Ron Carter and changing drummers.

The years in Europe

In 1966 Farmer spent half a year in Europe for the first time; he recognized the increasing importance of European jazz. In 1966/67 - again in the USA - he had a formation with Jimmy Heath , then toured Europe for several years and finally moved to Vienna in 1968 , where he initially worked with the Austrian Radio Orchestra and Erich Kleinschuster's sextet . In addition to jazz music, he played baroque and classical trumpet concerts , for example as a soloist in Bach's Brandenburg Concerts or Joseph Haydn's Trumpet Concerto . During the same period he worked with the Kenny Clarke / Francy Boland Big Band and the Fritz Pauer Trio .

He stayed in Vienna for ten years and became a member of the ORF Big Band , but also made various trips to the USA. So appeared at the Newport Jazz Festivals in 1973 and 1974 and in 1976 had a short-lived formation with Art Pepper , Hampton Hawes , Ray Brown and Shelly Manne (album On the Road ). He also recorded records with sidemen such as Yusef Lateef , Jeremy Steig 1976, Joe Henderson / Jim Hall 1978.

From 1974 until his death in 1999 he performed regularly in the Vienna Jazzland - first often with various local formations and then for many years with his own European quintet ( Harry Sokal sax, Fritz Pauer p, Heiri Känzig or Paulo Cardoso b and Joris Dudli and Mario Gonzi dm). With this formation, the album Foolish Memories was created in 1981 , in a duo with Pauer, the album Azure in 1987 .

In the 1980s there was a revival of the Jazzet with Curtis Fuller and Benny Golson, with whom several albums were created. He also formed a quintet in which the saxophonist Clifford Jordan played for a long time ; with him award-winning albums such as Blame It On My Youth (1988) were recorded. Art Farmer showed himself to be an excellent interpreter of ballads in his old work.

Among his longtime music partners are Gerry Mulligan , Slide Hampton , Ron Carter , Jim Hall , Jerome Richardson , Wynton Marsalis , Geoff Keezer , Annie Ross and Lewis Nash . Although he was (wrongly) considered a big band musician for many years , Farmer has made more than 50 records under his own name. In 1994 he received the " Golden Merit of the State of Vienna ".

While his rather pointed, almost "crowing" tone (Jörgensen / Wiedemann) was predominant in the early hardbop phase, reminiscent of various older trumpeters such as Buck Clayton , he finally made the flugelhorn his main instrument and performed one towards the end of the 1950s Shift to a connection of the vocabulary of Bop with the poetry and weightlessness of great melodists of the rank of Lester Young . For him it is about a "melodic, swinging and lyrical quality", says Art Farmer. "I try to play pieces the way a singer would sing them - a very good vocalist like Billie Holiday " .