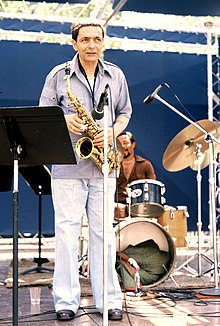 Arthur Edward "Art" Pepper (born September 1, 1925 in Gardena , California , † June 15, 1982 in Los Angeles , Panorama City , California) was an American alto saxophonist . Pepper was one of the most important alto saxophonists in jazz , succeeding Charlie Parker , but did not succumb to his dominant influence at the time, but instead merged his own ideas with influences from Benny Carter , Zoot Sims and Lester Young . In his late recordings, the influence of the modal style of playing that was brought to jazz by Miles Davis and especially by John Coltrane can be felt .

Art Pepper had clarinet lessons from the age of nine and began playing the alto saxophone at the age of twelve.

A first high point in the career of the German-born musician was the collaboration with Benny Carter , who encouraged him intensively; under his aegis he developed into a confident soloist. From 1946 Pepper played in the Stan Kenton Orchestra , where he met Lee Konitz , the other great alto saxophonist of his generation. In the time at Kenton until 1952 he refined his style; The outstanding technician and imaginative improviser became one of the leading exponents of West Coast jazz and towards the end of the decade he made a number of outstanding records under his own name ( Art Pepper Meets the Rhythm Section , The Art of Pepper , Modern Art , Art Pepper plus Eleven , Intensity et al). During his time with Kenton he was addicted to heroin ; so began a constant ups and downs of successes and prison stays (from 1953 Pepper sat behind bars for a total of eleven years).

On the afternoon of October 25, 1960, Pepper was arrested for heroin possession; in the morning he had finished his album Smack Up (Contemporary). Temporarily released, he was able to record the album Intensity (Contemporary) with his quartet in November 1960 , then he was sentenced to several years in prison in May 1961, which he served in St. Quentin . After more than three years, he was sent to Tehachapi Men's Prison , from which he was released on March 22, 1964. Shelly Manne had supported him during this time, wrote him letters and promised an engagement in his club. The time in St. Quentin had embittered him, which was also reflected musically: His tone became harder and was more based on John Coltrane and Ornette Coleman . Pepper wrote pieces like " D Section ", " Groupin ' ", " The Trip " and " The Screamer " during this time . In 1964 he appeared with his long-time friend, the bassist Hersh Hamel , the pianist Frank Strazzeri and the drummer Bill Goodwin at the Shelly's Manne-Hole jazz club, then at the Gold Nugget in San Francisco. Its owner, Don Mupo, brought the band to Ralph Gleason , who at the time was working as a journalist for Down Beat magazine and as the producer of the half-hour TV show Jazz Casual . For its broadcast, Art Pepper u. a. " The Trip " on. Otherwise he had only a few opportunities to perform during this time; so he accompanied the singer Frankie Randall for an album.

Once again addicted to drugs, Pepper was arrested again in 1965 for violating parole and was only released in June 1966. He made his comeback at Shelly's Manne-Hole in August 1966 with a borrowed alto saxophone - with his friend Hersh Hamel, the pianist Roger Kellaway and the drummer John Guerin . The year 1967 was also very difficult for Pepper: He occasionally played at sessions in Mann's Club, etc. a. with Tommy Flanagan and again at Gold Nugget, San Francisco. For his friend and supporter Lester Koenig from Contemporary Records, he recorded another record in 1968, which was not released at the time. The personal turning point came for Pepper in June 1968 when he the place of Ernie Watts in the Big Band of Buddy Rich could take. After a two-week engagement at Caesars Palace in Las Vegas , he was back on his feet; this was followed by a guest performance in the band of Carl Fontana . In 1969 he performed at the Fillmore East and recorded with his own band in Donte's Jazz Club, North Hollywood.

With the help of his third wife, Laurie Miller, and a methadone program , he finally managed to exit his drug career; from 1975 until his death he was again a much sought-after soloist. His game was now more fragile and sensitive than before. Out of this late phase are the recordings from the Village Vanguard from 1977, his records for the jazz label Galaxy , among others with George Cables , Tommy Flanagan , Cecil McBee and Billy Higgins as well as the recordings in the quartet of the Bulgarian-American pianist Milcho Leviev .

In his autobiography Straight Life (1980), Pepper mainly describes his life in prison and as a junkie on the street.

Pepper died of a stroke in Los Angeles. He is buried in the Abbey of the Psalms Mausoleum in Hollywood Forever Cemetery in Hollywood .

Recordings from the Unreleased Art Series

Further recordings not published during his lifetime