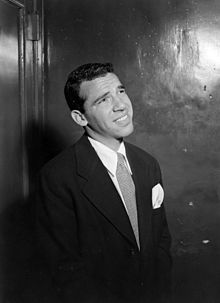 Bernard "Buddy" Rich (* 30 September 1917 in New York ; † 2. April 1987 in Los Angeles , California ) was an American jazz - drummer and bandleader and is considered one of the best and technically versiertesten jazz drummers in the world .

Rich was born into a family of artists and gave concerts under the pseudonym Traps the drum wonder as a four year old . At fifteen, he became the second highest paid child star of the 1930s (after Jackie Coogan ).

He made his first experiences as a jazz drummer in 1937 with Joe Marsala and was then hired by Artie Shaw . He achieved international fame - like his young bandmate Frank Sinatra - finally in the early 1940s with Tommy Dorsey . With Sinatra's financial help, Rich founded his own Buddy Rich Big Band in 1946 , in which he often demonstrated his considerable talent as a singer. In addition to his own big band projects, Buddy Rich appeared as a drummer a. a. with the Dorsey Brothers , Harry James , Woody Herman and Count Basie . He has also given numerous concerts and made recordings with other great jazz musicians such as Louis Armstrong , Lester Young and Nat King Cole , Dizzy Gillespie , Charlie Parker , Miles Davis , Oscar Peterson , Lionel Hampton , Art Tatum , Mel Tormé and many others.

Rich's virtuoso mastery of the drums (but also his starry airs) influenced generations of drummers from all branches of music worldwide. The spectacular drum duels between him and Gene Krupa or Max Roach are legendary , but also his appearance on the Muppet Show in 1978, in which he fought a duel with the animal . His charisma and strong personality were highly valued in the music business, but were sometimes viewed critically by colleagues. He was considered a pedantic perfectionist who took the stage presence of his big band very seriously, sometimes to the chagrin of his band members, from whom he demanded absolute attention and concentration. He was said to have choleric tendencies, but also respect and esteem for his famous colleagues, combined with warmth of heart and loyalty. Most of all he valued the individuality of a musician, so that he always praised other drummers such as Max Roach, Philly Joe Jones , Mel Lewis or Steve Gadd . For drummers who tried to copy him, however, he had only contempt. In 1978 Buddy Rich played with his big band at the North Sea Jazz Festival .

One of his last appearances as a band leader was the legendary "Concert for the Americas" with Frank Sinatra in 1982 in Altos de Chavón in the Dominican Republic, a recording of which has been on DVD since 2010. Sinatra and Buddy Rich were in unique top form and with an enormous presence.

Rich fell ill with a brain tumor in 1987 and died of a heart attack after emergency surgery. He was buried in the Westwood Village Memorial Park Cemetery in Los Angeles . 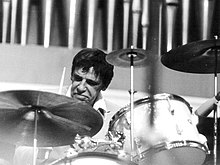 Buddy Rich 1977 during a concert in Cologne

Two years after Rich's death, a memorial concert was held in his honor, at which some of the world's best drummers, including Dave Weckl , Steve Gadd , Vinnie Colaiuta , Dennis Chambers , Marvin Smitty Smith , Steve Smith , Neil Peart and Louie Bellson , with the Buddy -Rich-Bigband (conducted by tenor saxophonist Steve Marcus ) performed. This "Buddy Rich Memorial Scholarship Concert" was released on DVD. The drummer Neil Peart then produced two CDs with the title "Burning for Buddy - A Tribute to the Music of Buddy Rich", which again featured some outstanding drummers (in addition to the aforementioned Joe Morello , Simon Phillips , Bill Bruford ) the Buddy Rich Big Band recorded some arrangements from Rich's repertoire.

Discography as a sideman (selection)