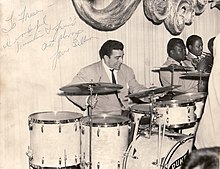 Luigi Paulino Alfredo Francesco Antonio Balassoni (* 6. July 1924 in Rock Falls , Illinois ; † 14. February 2009 in Los Angeles , California ) was an American jazz - drummer , composer and arranger , who under the name Louie Bellson was known . According to Richard Cook , he was the last of the great swing drummers.

As the son of a music business owner, he learned various instruments at an early age. He received drum lessons from Roy Knapp, who was also the teacher of Gene Krupa . He befriended Krupa, Dave Tough, and Buddy Rich . In 1940 he won a drum competition under the auspices of Krupa, which led to him joining Ted Fio Rito's band as a teenager in 1941 , where he was discovered by Benny Goodman . Between 1943 and 1951 he played for jazz greats such as Benny Goodman, Tommy Dorsey and Harry James . In 1952 he moved to Duke Ellington , for whom he wrote the plays Skin Deep and The Hawk Talks . In 1952 he married Pearl Bailey and left the Duke Ellington Orchestra to work for her as musical director. With smaller and larger formations, he established himself as one of the successful band leaders of American jazz; Musicians such as Bobby Shew , Don Menza , Blue Mitchell , Joe Pass , Larry Coryell and George Duvivier played in his groups . In the late 1950s and 1960s he also performed with Tommy and Jimmy Dorsey , Count Basie and Jazz at the Philharmonic , and again with Harry James and Duke Ellington. He played on Ellington's album A Drum is a Woman in 1956 , but also at the Sacred Concert in 1965 . He has also worked with the Saturday Night Show orchestra and with singing stars such as Sarah Vaughan , James Brown and Frank Sinatra .

He also worked as a studio musician on numerous records, including some recordings by Ella Fitzgerald . In the 1970s he often played in a trio with Oscar Peterson and the Danish bassist Niels-Henning Ørsted Pedersen . In 1987 Louie Bellson appeared on the ARD Super Drumming series , hosted by Pete York . He was available for interviews there.

In his almost 60-year career, Bellson recorded more than 200 albums and wrote around a thousand compositions and arrangements. These included works for classical orchestra and percussion ensemble. Since the beginning of the 1970s he passed his drum style on to drummers of the next generation, including Marvin Smitty Smith . He died in Los Angeles on February 14, 2009 at the age of 84.

In the mid-1940s, he began using two 25- or 26-inch bass drums in his drums , making him the inventor of the double bass drum technique. He made a name for himself as a big band drummer and leader, but is equally sought after and appreciated as a drummer for small bands and accompanist for singers and pianists such as Count Basie, Art Tatum and Oscar Peterson . On the occasion of his eightieth birthday celebrations, the double bass drum pioneer joked, “I'm not that old yet; I'm 40 in this leg and 40 in the other leg. ” Charly Antolini named Louie Bellson as his role model.