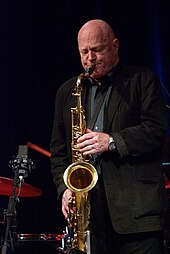 Menza learned the saxophone in high school in 1953/54 and deepened this competence by studying at the State University of New York . During his army time in Stuttgart he studied clarinet and from November 1956 was a member of the “7. Army Jazz Band ”, in which Don Ellis , Leo Wright and Cedar Walton also played. In 1957 he appeared at the German Jazz Festival in a "Four Brothers" formation with Joki Freund , Hans Koller and Willi Sanner before returning to the United States. In 1959 he played with Al Belleto and was named best tenor saxophonist at the Notre Dame Festival. In 1960 and 1961 he worked with Maynard Ferguson , then with Stan Kenton , before he was active with his own quintet in Buffalo.

Between 1964 and 1968 he was part of Max Greger's orchestra and was also the co-leader of the Bavarian Radio Jazz Ensemble. Joachim Ernst Berendt produced the record "Morning Song" with him in 1965 (with, among others, Rick Kiefer , Fritz Pauer , Pierre Favre ). In 1967 he was featured at the Montreux Jazz Festival and appeared in various formations, including with the Kenny Clarke / Francy Boland Big Band . In the 1960s, during his job-related stay in Munich, Menza played a key role in the sound of the legendary jam sessions in the Schwabing jazz club " Domicile ".

After returning to the USA, Menza worked for Buddy Rich before working as a composer, arranger and studio musician in Los Angeles , working with Louie Bellson and his band for a longer period of time . His record "Bones Blues" (1979) was nominated for the Canadian Juno Award . Since 1980 Menza has repeatedly led his own big band, with which he plays his compositions and arrangements in a modern mainstream version. He also worked with the hr big band and other European big bands, such as those of Bobby Burgess and Harald Rüschenbaum . He has also been teaching at the University of Las Vegas since 1989 , is active in the International Association for Jazz Education and gives workshops.

The saxophonist has a powerful tone and plays lively, melodic solos. He has worked on recordings by Carmen McRae , Ernestine Anderson , Dave Grusin , Jimmy Witherspoon , Horace Silver , Klaus Weiss , Peter Herbolzheimer and Dianne Reeves, among others . As a guest star of the Harald Rüschenbaum Trio, he appeared in front of the Munich audience in the autumn of 2012 in the BR show “Bühne frei im Studio 2”. The broadcast date of the recording is planned for December 7, 2012 in the "Jazztime" on BR-Klassik.

The Heavy Metal -Schlagzeuger Nick Menza ( Megadeth ) was his son.