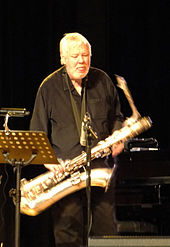 From 1953 to 1959 Ekkehard Jost completed his school education ( Realschule in Lauenburg , Gymnasium Lüneburg up to high school ). In 1959 he began studying musicology, physics and psychology at the University of Hamburg , which he completed with a doctorate in 1965 . (Title: Acoustic and Psychometric Investigations on Clarinet Sounds ).

From 1966 to 1972 Jost worked as a research assistant at the State Institute for Music Research Berlin . In 1973 he completed his habilitation with a thesis on free jazz and was appointed professor of musicology at the Justus Liebig University in Gießen, where he headed the institute for musicology and music education and founded the systematic musicology course. His research and teaching focuses on music sociology , contemporary music, acoustics and recording studio technology . His habilitation thesis, which was also translated into English and French, is considered the first musicological analysis of free jazz. Other of his books deal with the social history of jazz .

Activity as a musician

As a musician, Jost played with numerous European jazz musicians. He led his own formations, including the formation "Grumpff", founded with students, which humorously mixed avant-garde jazz with popular music and music-theatrical actions, as well as the free jazz project "Amman Boutz" (with Herbert Hellhund ). His records and CDs also appear on his own music label, fish music . Most recently, in addition to his octet, he was on the road with his trio , Joe Bonica ( drums ) and Dieter Manderscheid ( double bass ). In addition to his work as a musician, he was also involved in the regional jazz scene as an organizer of concerts. In 1975 he called the Giessen Jazz Initiative into being and initiated the Musica Nova concert series through a specially founded association to promote contemporary music. In addition, he designed and organized the concerts in the Giessen Botanical Garden.