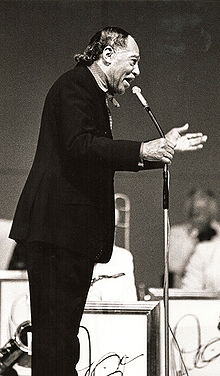 Edward Kennedy "Duke" Ellington (born April 29, 1899 in Washington, DC , † May 24, 1974 in New York City ) was one of the most influential American jazz musicians . As a pianist , he was one of the most important innovators of the stride piano . As a composer , he wrote almost 2,000 compositions (songs and suites), of which a hundred soon became jazz standards . As a band leader , he contributed to the development of swing as a big band style.

Ellington came from the black petty bourgeoisie in Washington. He was the son of head waiter James Edward Ellington, who worked once as a butler in the White House . He later ran a party service and tried to raise his children as if they were growing up in a wealthy, middle-class household. Little Ellington received his first piano lessons at the age of seven from his mother, Daisy Kennedy Ellington. However, he did not enjoy playing the piano, so that Daisy soon stopped teaching without success. It was not until he was fourteen that he became interested in music after listening to the pianist Harvey Brooks. Ellington had little formal music lessons, however, but took up what was available in his environment, especially ragtime . In addition to some regional musicians, James P. Johnson was his first role model, whose Carolina Shout set the course.

Due to his distinguished charisma and polished manners, he was named "Duke" (English for "Duke") by schoolmates in his youth. He began his professional career as a musician at the age of 17. In his first public appearances, he plays to dance. As early as 1920 he enjoyed a good reputation within the manageable music scene in Washington. He was not only active as an accompanist on the piano, but also as a band leader who skillfully ensured that his ensemble found work. When he moved to New York with a group of musicians from Washington at the age of 24 , he founded the band The Washingtonians there . The first attempt went wrong. Then the band brought in the singer Ada Smith : Ellington and his Washingtonians played in various New York clubs and toured New England as a dance music band until 1927. When the famous King Oliver left the famous Cotton Club , Ellington was offered the job of house band in New York's most prestigious nightclub at the time. Little by little, the Washingtonians became the Duke Ellington Orchestra . In the Harlem clubs, especially through the regular radio broadcasts from the Cotton Club, Duke Ellington and his Jungle Band achieved national fame. The club was home to the most talented songwriters in the business: Dorothy Fields , Jimmy McHugh, and Harold Arlen . The radio broadcast live from the club, the press reported on what was happening.

During a concert break in 1965

During this time, Ellington had the opportunity to compose music in a variety of styles for dance theater and other areas of expertise of the band. He experimented extensively in tonality , with screaming trumpets and wah-wah or growling saxophones . The jungle style became his trademark at the time. When Ellington left the Cotton Club in 1931, he was one of the most famous African-Americans . He regularly produced for record companies and film studios. As an accomplished businessman, Ellington collaborated with the publisher Irving Mills , who insisted that Duke only record his own compositions. Finally, in the summer of 1933, he sent the orchestra on its first European tour.

Duke Ellington then undertook numerous other tours of the United States and Europe with his band, as well as a world tour in the 1960s. He worked his whole life as a musical experimenter and recorded albums not only with his orchestra, but also with musicians who are more of the artistic avant-garde of modern jazz, such as John Coltrane and Charles Mingus . The band reached a creative peak in the 1940s when he arranged and composed specifically for the different voices in his orchestra . This development was influenced to a considerable extent by the pianist, arranger and composer Billy Strayhorn , whom Ellington met in the late 1930s and accepted into his orchestra. Ellington and Strayhorn had a lifelong close friendship. The piece Take The A-Train, which is most frequently associated with the Ellington Orchestra, is not - as is often wrongly assumed - by Duke, but by Billy Strayhorn.

Even as musicians left him and the popularity of swing declined, Ellington found new forms, connections and sidemen . In his late work he often composed in longer forms, based on classical music , such as his Black, Brown and Beige (1943), Such Sweet Thunder (1957), based on William Shakespeare , and the big band version of Peer-Gynt -Suite (1960) show. The connection of the originally separate compositions diminuendo in Blue and Crescendo in Blue from 1937 to diminuendo and crescendo in Blue by over 27 choruses extending tenor sax - solo by Paul Gonsalves during the Newport Jazz Festival in 1956 rendered by publication of the live recording Ellington at Newport the longed-for comeback.

Ellington's longer, symphonic works are occasionally criticized for having lost sight of the essence of jazz in favor of an "artificial classical music".

Duke Ellington was known for his keen vanity and his bossy and manipulative dealings with his band and family members. For example, he did not allow his sister to leave the house unaccompanied. His son Mercer said of him: "He rules with an iron hand in a glacé glove".

In 1965 Ellington was nominated for the Pulitzer Prize , which he did not receive. His comment:

“Fate is kind to me. It doesn't want me to become famous too young. "

On April 24, 1969, he received the Presidential Medal of Freedom from US President Richard Nixon for his life's work . In 1973 he was accepted into the French Legion of Honor .

Duke Ellington died of pneumonia on May 24, 1974 and was buried in Woodlawn Cemetery in the Bronx, New York . 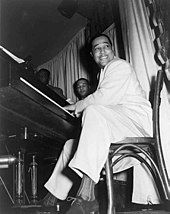 Duke Ellington at the Hurricane Club, 1943

Gunther Schuller pointed out several times that the literature about Ellington pays too little attention to his piano playing. The duke was certainly not a virtuoso and is rated more as an ensemble pianist by many authors. However, Ellington steered his orchestra from the piano, and not with conducting gestures, but consistently with his own playing. The piano also played an important role in the countless rehearsals. Did Ellington often use his instrument to pick up phrases from his fellow players, from which he formulated certain topics. Spontaneous harmonizations also came about in this way, because the arrangements did not take place at the desk. He played parts of the movements several times until they were right by heart. The piano was the direct intermediary between Ellington's inner ear and his orchestra, with the result that there was no need to prepare a score for many pieces, at least from the dance music repertoire.

“As a soloist, he deserves a special place in jazz history”, writes biographer Ulrich Kurth, “he had a remarkably varied touch. Hardly any other pianist was able to create such different timbres on the piano, to use dynamics, rhythm and idiosyncratic harmony so confidently, and without recourse to brilliant technique. An early example of this is Black Beauty from 1928, in a duet with bassist Wellman Braud . (...) With just a few bars he was able to establish the emotional gesture of a piece ”.

The pianist Duke Ellington particularly highlights his trio session with Charles Mingus and Max Roach (1962), which was released on the album Money Jungle .

Duke Ellington was an outstanding figure in jazz from the 1920s to the 1960s with an influence that cannot be overestimated to this day. He is one of the greatest American composers. His numerous successes include: Satin Doll , Rockin 'in Rhythm , Mood Indigo , Caravan or Sophisticated Lady . In the 1920s and 1930s they were often created in collaboration with Irving Mills , and from the late 1930s with Billy Strayhorn. 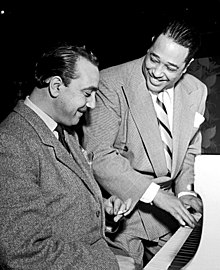 Ellington wrote many of his works for individual musicians in his orchestra . He used their individual talents specifically for the sound of his music. These included Johnny Hodges , Bubber Miley , Cootie Williams , Joe "Tricky Sam" Nanton , Barney Bigard , Ben Webster , Harry Carney , Sonny Greer , Otto Hardwick and Wellman Braud . The Concerto for Cootie, recorded in 1940, is one of the most famous of these compositions . Some musicians such as Jimmy Blanton and Ben Webster gave jazz far-reaching impulses even during the short time they played with Ellington. Many musicians such as Johnny Hodges, Barney Bigard and Otto Hardwick belonged to his ensemble for decades and experienced their artistic climax during this time.

Ellington also wrote film scores , from Black and Tan Fantasy (1929) to Anatomy of a Murder (1959) with James Stewart to Paris Blues (1961) with Paul Newman and Sidney Poitier as jazz musicians.

Gunther Schuller designed a system for the repertoire during the creative time at the Cotton Club .

In 1970 Ellington was elected to the American Academy of Arts and Sciences and the American Academy of Arts and Letters . In 1997 the sculptor Robert Graham erected a memorial to him in New York's Central Park at the intersection of Fifth Avenue and 110th Street. In his native Washington, there is the Duke Ellington School of the Arts in his memory , which teaches talented students for careers in the fine arts, and the Duke Ellington Bridge in Washington DC

Duke Ellington had been a member of the Freemasons ' Association since 1932 , his Social Lodge No. 1 in Washington DC is constituted under the Prince Hall Grand Lodge .

His written estate is in the Smithsonian Museum in Washington, DC, and he bequeathed his tapes to a Danish radio station.

There are more than 2000 compositions by Ellington. A small selection:

Development of the Ellington Band