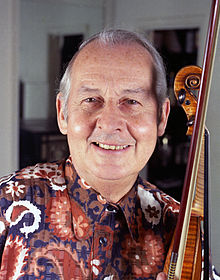 Grappelli was born in the Hôpital Lariboisière in Paris as the son of an Italian Marchese and a French woman from Saint-Omer and was baptized Stefano. He lost his mother when he was four years old. When the First World War broke out, his father was drafted into the Italian army. Six-year-old Stefano was able to take a few dance lessons with Isadora Duncan , but then came to a Catholic orphanage, which he experienced as a traumatizing experience because he slept on the floor there and often had to starve. When his father returned from the war, he made sure that his son received French citizenship, whereupon his first name was changed to Stéphane.

As a teenager, Grappelli taught himself to play the violin and the piano and, without ever having had a teacher, passed the entrance exam for the Paris Conservatory . He studied there between 1924 and 1928. During this time and after his studies he worked as a musician in cinemas and in dance bands such as Grégor et ses Grégoriens , until he met Django Reinhardt in 1933 . Grappelli founded the Quintette du Hot Club de France together with Reinhardt , they made numerous records together, including a. for the Swing label until 1939 and celebrated concert successes. When the Second World War broke out on September 1, 1939 , the band was on a concert tour in London . Reinhardt went straight back to Paris, but Grappelli stayed in England .

In England, Grappelli formed a new band with the young pianist George Shearing , which emerged from Arthur Young's Swingtette . He only worked with Reinhardt again after the war, but without becoming a member of the band. Stéphane Grappelli developed into the most influential violinist on the jazz scene in the 1950s and 1960s and made his instrument acceptable in jazz. From then on, Grappelli recorded records with all the great jazz musicians around the world or went on tour with them. On September 30, 1966, Duke Ellington brought the four most famous violinists of the time to the stage with the concert “Violin Summit”. In addition to Grappelli Stuff Smith , Svend Asmussen and Jean-Luc Ponty appeared in different sets . Together they played It Don't Mean a Thing (If It Ain't Got That Swing) .

At the beginning of the 1970s, Grappelli began an artistic collaboration with the classical violinist Yehudi Menuhin . Until the 1990s he often went on concert tours, initially with Diz Disley . He celebrated his 86th birthday with Gary Burton , Martial Solal and Jean-Luc Ponty. Until shortly before his death he made studio recordings (also with younger musicians), such as a solo (Gage 300 GBP) for Pink Floyd's album Wish You Were Here in 1975 and Tivoli Gardens, Copenhagen, Denmark with Joe Pass and Niels-Henning Ørsted Pedersen in 1979 . His last CD Celebrating Grappelli , recorded shortly before his death in 1997 , was released posthumously. Stéphane Grappelli's urn is in the columbarium of the Père Lachaise cemetery in Paris .

Albums under your own name 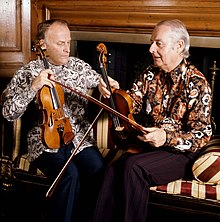