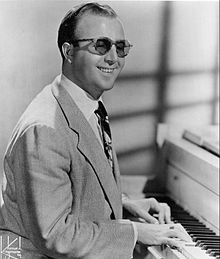 Shearing, blind from birth , began playing the piano at the age of three. He grew up as the youngest of nine children in the working-class Battersea district and attended the Linden Lodge School for the blind, where he received rudimentary musical training. By making jazz recordings e.g. B. "listened to" by Teddy Wilson or Fats Waller , he taught himself the musical fundamentals of the style and soon began to perform in London hotels, clubs and bars; occasionally alone, more often in dance bands. When Leonard Feather heard him at a jam session at the Rhythm Club , he organized a first recording session in 1939; he later arranged for Shearing to emigrate to the United States.

In 1940 Shearing became a member of Harry Parry's then popular band . He played for the BBC , among others with the jazz violinist Stéphane Grappelli and with Jimmy Skidmore , and as an accordionist with Frank Weir. In 1946 the pianist went to the United States , taking citizenship in 1955. In 1948 he appeared as a soloist, then with groups in the Three Deuces . In January 1949 he led a quintet in the Clique Club , which Buddy DeFranco also belonged to.

As the leader of a quintet (piano, guitar, bass, drums and vibraphone), in which musicians like Cal Tjader , Charlie Shoemake , Chuck Wayne , Marjorie Hyams , Denzil Best , Israel Crosby , Joe Pass , Pat Martino , Emil Richards , Toots Thielemans and Gary Burton , Shearing recorded a number of highly successful records; among them "September in the Rain", his only hit in the US charts, and " Lullaby of Birdland ". His compositions "She" and "Conception" also became standards .

Shearing was also inspired by classical music; some of his solos are reminiscent of the style of Debussy and Erik Satie , with whom he refined his style. A variant of the block chord technique, shearing voicing , is named after him. "The fact that Shearing was often reviled as a cocktail pianist for this - he is said to have called Thelonious Monk a ' piano tuner ' - didn't detract from his success."

After a fall that forced him to hospital for months, he retired from concerts in 2004. In 2007 Queen Elizabeth II knighted him. In the early morning hours of Feb. 14, 2011 Shearing died, according to his longtime manager Dale Sheets in Manhattan the consequences of heart failure ( Engl. Congestive heart failure ).

The typical George Shearing sound emerged from the unison playing of vibraphone, guitar and piano; Shearing wanted to transpose the big band music of the swing era into a smaller line-up:

“The guitar plays the melody in the lower register, the vibraphone an octave above; the piano fills the middle and plays all the voices. With that you actually have a quintet edition of the Glenn Miller sound . "

In the “shearing sound”, the piano melody is repeated as a chord of vibraphone and guitar one octave below the actual melody part. Shearing's style, which among other things cultivated the unison playing of the piano and vibraphone , was widely copied. Keyboardist Jim Beard is one of his students .

The writer Jack Kerouac dedicated a long, intense passage to the pianist George Shearing in his work " On the Road ".