The term jazz piano describes the role of the piano in jazz , especially the specific playing and composition techniques that have emerged in the course of jazz history.

At the beginning of jazz history, the piano appeared more as a solo instrument - the marching bands naturally got by without a piano - over the course of time, it developed more and more as an accompanying and ensemble instrument . In New Orleans jazz , the piano was not integrated into jazz bands until the 1910s; the first pianist there was probably Buddy Christian .

As a component of the jazz band, the piano in traditional jazz was mainly used to generate rhythm and harmonious differentiation: With its help, the beat of the double bass (tuba) and guitar / banjo was doubled. From the swing on, the pianists left the beat and bass more and more to the drummer and bassist. Although a member of the rhythm section, the pianist in a larger band ideally limited himself to inserting individual off-beat chords like Count Basie and suggesting the chord progressions rather than playing them out. At the same time, however, the pianists emerged more and more as equal soloists within the ensemble, and as a result playing the piano more closely resembled the melody of the wind instruments.

After the swing era, many pianists in modern jazz returned to a more “percussive style of playing” and made “their instrument sound clear, transparent and hard.” On the other hand, since Chick Corea, pianists have come back to approaching a romantic ideal tone, for example to rely more on pedal sound .

As early as the 1940s, the mechanical piano in jazz was partially replaced by electro-mechanical instruments. Back then, Earl Hines was playing and recording on a storytone electric piano. At the end of the 1950s, musicians like Ray Charles and Sun Ra followed and prepared the ground for the use of the electric piano : Joe Zawinul experimented with the timbres of different keyboard instruments: for " Mercy, Mercy, Mercy " he used a Wurlitzer piano , while he " Country Preacher ”recorded on the Fender Rhodes , on which it produced a more percussive sound. Subsequently, electric pianos, synthesizers and other keyboards expanded the soundscape, especially in Fusion Jazz ; today the piano is one of many keyboard instruments in jazz.

Every jazz style that has emerged in the last 100 years and every real innovation in the jazz piano is characterized by the fact that it is also used more or less in later developments. This makes the jazz piano stylistically as diverse as jazz itself.

Jazz pianists often assign different roles to the hands. In solo play , the left hand knows a variety of ways to design the bass lines and the chord progressions , while the right hand takes on the melody lines in an equally diverse way . Playing jazz piano in an ensemble requires an appropriate and, if necessary, economical selection from these options.

Traditional elements of the jazz piano are in detail: 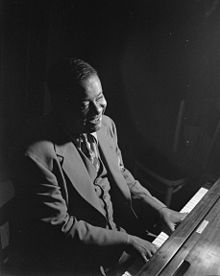 Art Tatum, circa May 1946.
Photograph by William P. Gottlieb .

In addition to the compositional techniques, the tone is characteristic of the jazz piano. In comparison to classical piano playing, the following special features stand out:

In the sixties and seventies, the jazz piano emancipated itself from the aforementioned traditional composition techniques and joined the musical avant-garde in many ways . Phrasing and timing, however, remained largely recognizable.

The role of some important pianists

The following jazz pianists turned out to be style-shaping: