He began his musical career in 1922 as a drummer in Kansas City ( Missouri ) and did not learn to play the piano until he was 18. From 1926 to 1938 he worked as a pianist, often with Big Joe Turner . In 1938 the two performed in New York's Carnegie Hall . This concert caused a boogie-woogie fever, and Johnson was from then on, with Meade Lux Lewis and Albert Ammons , who had also played at the concert, one of the leading pianists of his time. The three musicians often appeared as a trio . In contrast to the other two, he felt more comfortable as a member of a band than a soloist.

In May 1949 he performed at the Paris Festival International 1949 de Jazz . In 1950 Johnson moved to Buffalo and continued to perform despite health problems, notably with Jimmy Rushing and Big Joe Turner . In 1958 he suffered a stroke that partially paralyzed him. When the German jazz fan H. Maurer, whose The Pete Johnson Story came out in 1965, raised money for him, he was pretty impoverished. Pete Johnson died in 1967 at the age of 62. 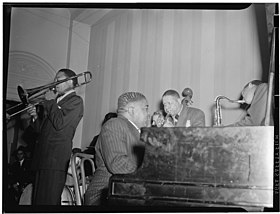