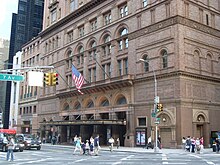 View of the stage

The Carnegie Hall [ ˌkɑrnəɡi hɔl ] is a concert hall in Manhattan in New York City at the corner of 57th Street and 7th Avenue. It is one of the most famous venues for classical, jazz and pop concerts in the United States .

The building bears the name of Andrew Carnegie , who financed its construction. William Burnet Tuthill designed the concert hall as a brick building in the Italian Renaissance style. Construction began in 1890. The first use took place in April 1891; however, it was not completed until 1897. The official opening took place on May 5, 1891. The Russian composer Pyotr Ilyich Tchaikovsky personally conducted his works for five evenings. For an entrance fee of two dollars you could experience a world star at this premiere, the cheapest ticket in the stands only cost 45 cents.

Since the renovation in 1986, the large hall has been called the “ Isaac Stern Auditorium”. It offers seating for 2,800 spectators on five levels. Its acoustics are famous; it is considered to be one of the best concert halls in the world. The chamber music hall on the third floor of Carnegie Hall (270 seats) has been called "Joan and Sanford L. Weill Recital Hall" since 1986. The small hall in the basement was rented to the AADA (American Academy of Dramatic Arts) in 1898 and converted into a cinema after 1960. Since 1997 a modern multi-purpose hall with 600 seats has been built here, the "Judy and Arthur Zankel Hall" opened in 2003. Also in Carnegie Hall is the Rose Museum and the Carnegie Hall Archive.

The building was owned by the Carnegie family until Carnegie's widow sold it to realtor Robert E. Simon in 1924. When the New York Philharmonic moved to Lincoln Center in 1960 , there were plans to demolish the building and build a commercial building instead. Under pressure from a group led by Isaac Stern, the City of New York bought it for five million dollars in 1960 and leased it to a nonprofit organization. In December 1962, Carnegie Hall was declared a National Historic Landmark . The concert hall was the venue for the Dimitri Mitropoulos International Music Competition .

The building was extensively renovated from 1983 to 1995.

Despite Carnegie Hall's monument status, the plans for a commercial building were not completely abandoned: 1987-1989 a 60-story residential and office building, called Carnegie Hall Tower , was built in the immediate vicinity of Carnegie Hall in the same block.