Armando Anthony "Chick" Corea (born June 12, 1941 in Chelsea , Massachusetts , † February 9, 2021 in Tampa , Florida ) was an American musician . He was one of the most important contemporary jazz - pianist and - composer and also was one of the founding fathers of jazz-rock . He won 23 Grammy Awards and was nominated for 67.

Chick Corea was in town Chelsea on June 12, 1941 US Treasury born Massachusetts. With his father, a band leader , he learned to play the piano at the age of four, mainly from classical composers. He also discovered jazz, especially soul jazz , at an early age . In addition to the jazz musicians Horace Silver and Bud Powell, he named classical composers such as Mozart and Beethoven as his greatest influences at this time . He made his first major appearances with Cab Calloway , Mongo Santamaría and Willie Bobo . After some recordings for other musicians, Chick recorded his first solo album Tones for Joan's Bones in 1966 . Two years later he recorded his second album Now He Sings, Now He Sobs with Miroslav Vitouš and Roy Haynes . This second record, often referred to as a classic, made Corea known in the jazz world.

In the same year, 1968, Chick Corea replaced Herbie Hancock in the band of jazz trumpeter Miles Davis and recorded with him the album Filles de Kilimanjaro . In the following years he also played on his albums In a Silent Way and Bitches Brew as well as on the live recordings of Live Evil and Black Beauty: Miles Davis at Fillmore West .

Return to Forever performing in New York in 1976

In 1971 Corea founded the group Return to Forever together with bassist Stanley Clarke , saxophonist Joe Farrell , drummer Airto Moreira and his wife, singer Flora Purim . In 1972 this fusion formation recorded their debut album of the same name.

In the same year Corea, Clarke, Farrell and drummer Tony Williams recorded the album Captain Marvel with the influential saxophonist Stan Getz . In September of that year, Return to Forever recorded their second studio album called Light as a Feather , which also featured one of Chick Corea's most famous compositions: Spain .

With a new line-up, further recordings with the Fusion formation followed, including guitarist Bill Connors and drummer Lenny White . In 1975 the album No Mystery , which won a Grammy, was recorded.

At the same time, Chick Corea recorded two solo albums: The Leprechaun and My Spanish Heart . Shortly afterwards, he met his future wife, Gayle Moran , when she was hired as a singer for Return to Forever .

In addition, Corea recorded the solo albums The Mad Hatter , Friends and Secret Agent in 1978 with various greats of jazz.

In 1981 the album Three Quartets followed , which was recorded with Michael Brecker , among others . Later that year he toured with saxophonist Joe Henderson , bassist Gary Peacock and drummer Roy Haynes.

In the same year there was a reunion with bassist Miroslav Vitouš, with whom he had recorded Now He Sings, Now He Sobs thirteen years earlier . Together with Haynes they recorded the album Trio Music .

In 1982 Corea was part of the R&B band Echoes of an Era , alongside fellow Return to Forever colleagues Stanley Clarke and Lenny White.

Together with Dave Weckl and John Patitucci as well as the guitarists Scott Henderson and Carlos Rios, Corea founded the fusion formation Elektric Band in the mid-1980s for the debut album of the same name, which was released in 1986. After a line-up with guitarist Frank Gambale and saxophonist Eric Marienthal , the group released four albums with a constant line-up between 1987 and 1991. In 1993 the album Paint the World followed with some new musicians under the name Elektric Band II .

In addition to the Elektric Band, Corea formed the Akoustic Band with his two band colleagues Patitucci and Weckl, which consisted exclusively of acoustic instruments. The trio recorded two albums.

In 1992 Corea founded the Stretch Records label , which did not choose its artists by genre , but by creativity. The label released albums by John Patitucci, Bob Berg , Eddie Gomez and Robben Ford, among others . After the contract with his old label, GRP Records , expired, he released his following albums on his own label, which had recently merged with Concord Records .

In the period up to 1998, other collaborations followed, for example with Roy Haynes or Bobby McFerrin .

In 2000 Corea recorded the album corea.concerto together with the London Philharmonic Orchestra, which features a three-movement orchestral version of Spain and Corea's first piano concerto.

After reuniting his Elektric Band in 2004 , he recorded a new album (To the Stars) with them, for which he took inspiration from author L. Ron Hubbard . Corea received two Grammys for the interpretation of The Ultimate Adventure by the same author .

In 2006 Chick Corea premiered his second piano concerto The Continents in a performance with the Bavarian Chamber Orchestra on the occasion of the Mozart Year at the Vienna State Opera. As part of this, he performed WA Mozart's Piano Concerto No. 24.

Shortly afterwards he released the record Super Trio: Corea / Gadd / McBride together with Steve Gadd and Christian McBride . The album, which was only released in Japan, was named Jazz Album of the Year by Japan's Swing Journal and achieved gold status.

In December of that year Corea recorded the album The Enchantment together with banjo player Béla Fleck . The two already knew each other from previous recordings such as Béla Fleck's Tales From The Acoustic Planet . Chick said of the album that it made him venture into uncharted territories.

After some new experiences with artists like Gary Burton or Antonio Sánchez , Chick Corea returned to the fusion. In 2008 he went on a world tour with Return to Forever .

After this tour he founded the Five Peace Band with John McLaughlin . With this formation he played several concerts and recorded the live album Five Peace Band Live , for which Corea won his 16th Grammy.

After a tour with Christian McBride and Brian Blade through the USA and Japan , Corea joined the RTF IV (Return to Forever IV) project , which included the violinist Jean-Luc Ponty on guitar in addition to Frank Gambale. Then he led a band with Steve Gadd , in which Lionel Loueke , Luisito Quintero , Steve Wilson and Carlitos del Puerto were active. Starting with flamenco jazz , he founded his Spanish Heart Band in 2018 , with which the album Antidote , which won a 2020 Grammy , was created.

Corea died of a rare cancer in February 2021 at the age of 79. The disease was diagnosed shortly before his death.

Corea was a member of the new Scientology religious movement . In all releases since his album To The Stars , which was inspired by Scientology founder L. Ron Hubbard , this can always be found among the acknowledgments. Chick Corea can be heard on three songs from Hubbard's album Space Jazz: The Soundtrack of the Book Battlefield Earth , which was released in 1982. In an interview with the All About Jazz e-zine , he said of Hubbard:

In 1993 Corea was excluded by the organizer from a concert that was to take place in the course of the World Athletics Championships in Stuttgart . The reason for this was that the state government of Baden-Württemberg wanted to cancel the subsidies for the event, which was justified with Corea's Scientology membership. Corea brought an action at the Mannheim Administrative Court against statements by the state government that it wanted to review the funding of events at which professing Scientologists appear. The lawsuit was dismissed.

Chick Corea lived in Clearwater (Florida) from 1997 , where the spiritual center of the Church of Scientology is located. There he maintained a studio with classrooms for workshops on Cleveland Street. 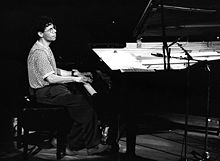 Winner of the Frankfurt Music Prize