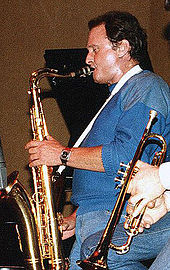 Stan Getz (born February 2, 1927 as Stanley Gayetzsky in Philadelphia , † June 6, 1991 in Malibu ) was one of the most influential saxophonists in the world for decades . Getz was a style-maker in the field of cool jazz , even though his greatest successes in popular music came in his Latin phase. He later became an outstanding mainstream saxophonist and was considered an elegant melodist who received eleven Grammy Awards .

Born the son of Jewish immigrants from the Ukraine, he played alto saxophone at the beginning of his career with Jack Teagarden (whose band he ran off in 1943 and who - in order to keep him - was appointed his guardian), with Nat King Cole , Lionel Hampton and own groups, then in the big bands of Stan Kenton (1944/45), Benny Goodman (who fired the 16-year-old for his immature behavior), Randy Brooks (1946), Jimmy Dorsey and Woody Herman (1947-1949). At first, Getz and his guitarist Jimmy Raney were considered well-known representatives of West Coast - or cool jazz. The tenor was initially a pioneer of bebop . The relevance of the recordings he had previously made with Horace Silver , Jimmy Raney and others was only properly assessed later.

With the Hermans Second Herd , he first gained more attention through his playing in the Four Brothers sound. He became known in 1947 for his solo Early Autumn . Getz stayed with Herman until 1949 and then worked as a band leader ( Stan Getz Plays on Clef ), but also as a companion in projects by Sarah Vaughan , Ella Fitzgerald , Dizzy Gillespie and on the Jazz at the Philharmonic (JatP) tours. His song Dear Old Stockholm , written in 1952 , became the jazz standard . 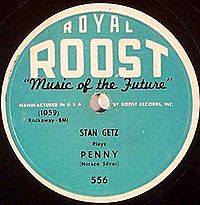 One of Stan Getz's recordings for Roost Records in the early 1950s: the 78 Shellack "Penny"

In 1954, he was sentenced to prison after attempting to steal drugs from a Seattle pharmacy with a toy gun. After that, after a JatP European tour in 1957/1958, he lived half withdrawn with his Swedish wife in Copenhagen before he returned in 1961 with the album Focus , which was accompanied by strings .

Stan Getz became world-famous in the early 1960s for his bossa nova recordings. His version of Desafinado (1962, on Jazz Samba ) with guitarist Charlie Byrd became a hit. His greatest success was probably the title The Girl from Ipanema (1963), which he recorded together with Astrud Gilberto , João Gilberto and Antônio Carlos Jobim on the album Getz / Gilberto , which earned him a Grammy.

After his bossa nova phase he played with his own groups, which u. a. Gary Burton , Chick Corea , Joanne Brackeen , Kenny Barron , Steve Swallow , Stanley Clarke , Miroslav Vitouš , Jack DeJohnette , Tony Williams , Roy Haynes . He played u. a. with (the pianist) Bill Evans , Chet Baker , Elvin Jones , Diane Schuur , Peter Herbolzheimer , the Kenny Clarke / Francy Boland Big Band . He has been producing his records himself since 1972. In 1977 he recorded the score for the thriller Der Fall Serrano .

Since 1985 he has worked as a lecturer at Stanford University in the establishment of the jazz department . From the 1980s he gave concerts again in Germany, the last in 1990 in the Munich Philharmonic. It appeared a few months before his death from liver cancer in 1991 at the age of 64.

Since the beginning of his career, the sensitive and privately prone to frivolous artist was a drug addict ; his career was interrupted by prison stays. Getz was able to get rid of heroin, but he never completely overcame his alcohol addiction and could become abusive under the influence of alcohol. Despite his drug and alcohol problems, he never failed on stage.

Getz is considered one of the most renowned jazz musicians, who was also recognized by his music colleagues. The reasons for this lie in his great melodic flair and his often exquisite tone. Getz is immediately identifiable both by his individual tone formation and by his specific phrasing . At play he always seemed very cool, almost indifferent; his music was nevertheless highly emotional, focused and technically absolutely perfect. He never played ecstatically, but despite all his restraint he always played with the highest intensity - the epitome of the cool jazz improviser.

Getz married Beverly Byrne, a singer in Gene Krupa's band, in 1946 and had three children with her. In 1956 he married Monica Silfverskiöld from Sweden, with whom he had two more children. After years of fruitless struggle against his drug addiction, the marriage was divorced in 1987, and the guardianship of his children from his first and second marriage was kept by his ex-wives.