Cool jazz is a style of concert jazz that was developed from bebop in the late 1940s in New York , USA .

Some musicians saw - starting from bebop - a possibility for the further development of jazz, in a stronger development of the aspect of form . They try to structure the pieces more strongly through composed and improvised parts, which resulted in complex arrangements. Later elements of European concert music were also integrated. Many cool jazz musicians had an academic training as musicians and clearly understood their music as "art" music.

The first recordings, which were still strongly bebop-oriented at the pace, a. from the scene around Gil Evans the trumpeter Miles Davis 1949/50 with his historical nonet (quasi a small Thornhill orchestra); However, it was not until later that these were put together as the long-playing record Birth of the Cool (1953 and 1957) and also received due attention outside of music circles. Major contributors, alongside Evans and Davis, are Gerry Mulligan ( baritone saxophone ) and John Lewis ( piano ). 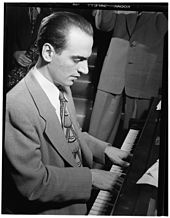 Lennie Tristano in the late 1940s

In a second circle, the fathers of cool jazz include the white pianist Lennie Tristano (1919–1978) , who also moved to New York from Chicago in 1946 and was tested by beats, with his students and fellow players Billy Bauer ( guitar ) and Warne Marsh ( tenor saxophone ), as well from the Thornhill crew the bustling Lee Konitz ( alto saxophone ), who at the time also took part as a soloist on the recordings of Davis Birth of the Cool . The Tristano School in particular was close to George Russell's music-theoretical ideas ( composition , arrangement ), which he laid down in the book The Lydian Chromatic Concept of Tonal Organization (published in 1953 and 2001) and which also led to modal jazz . According to Andre Asriel , the recordings made by Tristano with a quintet or sextet in 1949 are "possibly even more important" for cool jazz (and later jazz styles) than the recordings by Davis' nonet. Tristano's music sounded a little 'constructivist' cooler than Evans and Davis.

New York cool jazz - as a cooperative artistic confrontation of primarily white and several black musicians around a demanding new idiom of early ' modern jazz ' - subsequently also had an impact on the West Coast : Initiated by Gerry Mulligan's work in 1952 in San Francisco, it developed the west coast a regional cool variant; this West Coast Jazz with representatives such as Chet Baker or Chico Hamilton had a further impact, mainly on European jazz (e.g. on Hans Koller ).

Cool jazz is not cool music. The term “cool” refers to a basic attitude towards making music. In contrast to bebop , the ideal of cool jazz is more introverted. It is often seen as a countermovement to the hectic bebop, as cool jazz is more concertante- oriented, preferring slower tenses and wide, curved melodies.

Both composition and improvisation are based on an intellectual understanding of art. In contrast to bebop as a soloist style, ensemble play plays an important role in cool jazz. Solos are now embedded in complex arrangements that experiment with sound and tonal gradations. The improvisation techniques of cool jazz still correspond to those of bebop. Musicians like Tristano or John Lewis also developed a technique of “motivic improvisation” which is reminiscent of the motivic work of European concert music, but was invented “spontaneously” in the tradition of jazz improvisation, ie not planned in the compositional sense. Collective improvisation can also be found in cool jazz.

Stylistically, the cool jazz of the circles around Evans / Davis and on the other hand Tristano has