Brookmeyer studied at the Kansas City Conservatory from 1947 to 1950 . After military service, he began his career in 1951 as a pianist with Tex Beneke . In 1952 he played with Louis Prima , Claude Thornhill , Terry Gibbs and Woody Herman and also began to perform on the valve trombone . In 1953 he moved to Los Angeles and became an important figure in West Coast jazz , first with Stan Getz ( At the Shrine , 1954), then in particular by replacing Chet Baker in Gerry Mulligan 's piano-less quartet (1954 to 1957). The formation appeared in 1954 at the Salle Pleyel in Paris , to be heard on the Vogue album Pleyel Concert . He was also part of the unusual Jimmy Giuffre Three (1957/58) with Giuffres saxophone, Brookmeyer's valve trombone and Jim Hall's guitar.

At the same time Brookmeyer continued to work as a pianist and recorded a record in 1959 with a quartet with Bill Evans . In the early 1960s he was co-leader, arranger and trombonist of the Gerry Mulligan Concert Jazz Band ; from 1961 to 1966 he led a relatively successful quintet with Clark Terry . In 1962 he arranged for Jack Teagarden ( Think Well of Me ); In 1965 he was one of the founding members of the Thad Jones / Mel Lewis Orchestra , to which he contributed numerous arrangements. From 1968 on he worked as a studio musician on the US west coast and often played alongside well-known mainstream jazz musicians. Until 1980 he was musical director of the reorganized Lewis Big Band, for which he performed both as a soloist and continued to write very demanding arrangements.

In the late 1980s Brookmeyer moved to Europe, where he continued to write and occasionally took part in recordings on the valve trombone.

Brookmeyer is considered the first notable jazz musician on the valve trombone since Juan Tizol . As a pianist he developed a percussive and dissonant way of playing completely outside of the previous jazz tradition. In 2006 he received the NEA Jazz Masters Fellowship .

The album OverTime: Music of Bob Brookmeyer (2014, Planet Arts Recordings) by the Vanguard Jazz Orchestra provides an overview of the range of Brookmeyer's compositions : four pieces from the early 1980s and four from the 2000s.

“Every time he puts his instrument to his lips, a phrase comes out of the quality of a jazz standard. When he is soloing, I want to get music paper straight away and write down what he is playing. " 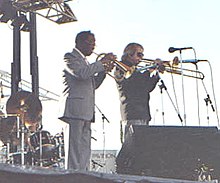