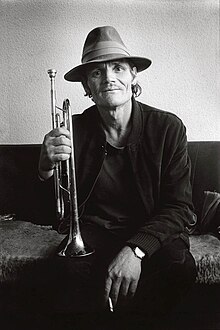 At the age of ten, Baker received a trombone from his father, who was a guitarist . Young Chet traded it for a trumpet. He was able to play simple swing melodies within a very short time and learned to improvise as an autodidact . His special ability was to grasp harmonic relationships quickly and to play around harmonic specifications melodically. Baker has composed little in his life.

First he played in the school orchestra, then at public dance events. In 1946 he enlisted in the military and joined the 298th Army Band in Berlin. In 1948 it was retired. He studied theory and harmony at El Camino College in Los Angeles, and played in clubs in the evenings. In 1950 he rejoined the army and became a member of the 6th Army Band in the Presidio in San Francisco. Then he asked for his release and decided to become a professional jazz musician.

In the spring of 1952 he became a trumpeter in Charlie Parker's band . Baker became famous as a trumpeter in the piano-less quartet of Gerry Mulligan , who played in The Haig in Los Angeles . The single My Funny Valentine , released on Fantasy Records in 1952 , became a hit and from then on it was a kind of signature for Baker, which he played over and over again in countless variations until the end of his life. Baker is often referred to as a representative of this style , also because of his association with Mulligan, who, alongside Lennie Tristano, is the leading figure in cool jazz . His recordings prove his great versatility in many styles of jazz.

When Mulligan went to prison for a drug offense in the spring of 1953, Baker formed his own quartet with pianist Russ Freeman (also with Bob Neel , Carson Smith ). Protected by the owner of the record company Pacific Jazz , Richard "Dick" Bock , who sensed a source of money in Baker, numerous recordings of varying quality were made. Baker became a superstar - perfectly staged by photographer William Claxton thanks to his looks and his resemblance to James Dean - and in surveys left jazz greats like Dizzy Gillespie , Miles Davis and Clifford Brown behind. It was around that time, however, that his addiction to heroin began and would last until his death. In 1955 Freeman left the quartet. Baker hired the talented pianist Dick Twardzik , who was also addicted to heroin , and went on tour to Europe. Baker made a number of outstanding recordings for Eddie Barclay in Paris. However, the successes were overshadowed in October 1955 by Twardzik's death as a result of a heroin overdose.

1956 Baker returned to the USA. After a few more recordings for Pacific Jazz, including sessions with Art Pepper and again with Russ Freeman, he switched to the Riverside label , for which he recorded three records. After being arrested for drug possession in 1959, Baker went to Italy , but he was also arrested there for falsifying prescriptions and spent a year and a half in prison.

Immediately after his release in 1962 (he was still on rehab) he made one of his best records to date for RCA Italia, Chet Is Back! Before the record hit stores, Baker fell into the habit again. In the mid-1960s he switched from the trumpet to the flugelhorn for a short time. In 1964 he was arrested for the second time in Germany for a drug offense and expelled to the USA.

There he made hardbop recordings with saxophonist George Coleman for the Prestige label in 1965 , which were released on five LPs over the course of the following two years. After that, Baker took on a number of commercial easy listening and mariachi records for Dick Bock's new label World Pacific with the formation The Mariachi Brass . 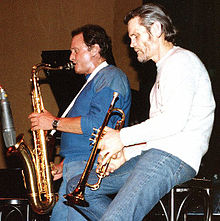 In the summer of 1966, he was the victim of a brawl in San Francisco that damaged his teeth. Despite the resulting impairments, he made a comeback at the end of the 1960s with the help of Dizzy Gillespie.

Between 1974 and 1977 he made a number of recordings, including some with Paul Desmond - including a re-encounter with Gerry Mulligan, in which the young guitarist John Scofield took part. In the late 1970s he played in a quartet with Phil Markowitz and Jeff Brillinger and in a trio with Philip Catherine and Jean-Louis Rassinfosse . In 1979 the collaboration with the German vibraphonist Wolfgang Lackerschmid and the recordings for the joint album Ballads for Two began .

1987 followed the Japan tour with Harold Danko , Hein van de Geyn and John Engels , during which the live album Chet Baker was created in Tokyo . Two weeks before his death, Baker recorded a posthumously titled Last Great Concert with the NDR Bigband and the Hanover Radio Orchestra . 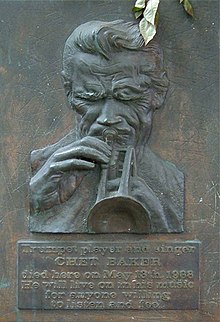 Baker had started mixing heroin with cocaine ( speedball ) and amphetamines. On May 13, 1988, he fell out of the window of his room in the Prins Hendrik Hotel in Amsterdam . He was buried in Inglewood Park Cemetery (Elm Lot , Division C, Number 152) in Los Angeles .

Street of Fame in Burghausen