Gillespie was born one of the younger of ten children and was supported and encouraged in his musical development by his father, a construction worker and local amateur band leader. At the age of four he played the piano , then he learned the slide trombone by himself and before he was twelve he switched to the trumpet . He received a scholarship to the Laurinburg Institute in North Carolina but soon left school to become a full-time musician.

At a young age Gillespie played in numerous Swing - big bands : In 1935 he was in Philadelphia hired by Frank Fairfax, which he left shortly thereafter. He toured Europe with Teddy Hill's band . Gillespie was a wanderer and played from 1939 to 1941 with Cab Calloway - who called his adventurous solos "Chinese music" - with Chu Berry and Cozy Cole , among others , until he was kicked out of the band in an argument with Calloway. In 1942 he played in the Earl Hines Orchestra with Charlie Parker, Sarah Vaughan and Billy Eckstine , while arranging pieces for Jimmy Dorsey and playing in Duke Ellington's band . Also in the development of bebop, he played an important role in experimental jam sessions with Thelonious Monk , Kenny Clarke , Charlie Parker and others in Minton's Playhouse in Harlem from 1941. Eckstine band newly formed , which are mostly from the band Hines emerged, was charged with Parker, Gillespie and Vaughan from 1944 the first band to play this new style. In 1944 he played in Oscar Pettiford's quintet Bebop at the Onyx Club and in the same year also made recordings with Coleman Hawkins with the quintet . From 1944 to 1945 he had his first combo with Parker in Three Deuces and Spotlite.

In 1945 he recorded his first historical bebop records with the Guild music label . A year later he founded his own orchestra, the " Dizzy Gillespie Big Band ", in which jazz greats such as Kenny Clarke , John Lewis , Milt Jackson , James Moody and John Coltrane played. With this composition he toured the United States, France and Belgium in early 1948 . In his work as a band leader he was able to transfer new jazz trends into a big band context. In 1950 he broke up the group for financial reasons and mainly played with small information. Occasionally, however, he put together big bands with whom he also went on tour. In the last years of his life he appeared several times with the "United Nation Orchestra" which he founded, in which not only former companions, but also students of his participated.

Gillespie ran for US President in 1964 ; However, with the catchy slogan “I'm running for president because we need one”, he was unsuccessful. A illegitimate daughter comes from a liaison with the songwriter Connie Bryson, Jeanie Bryson , an American jazz singer.

In the 1940s and 1950s, Gillespie was - also outwardly - the epitome of the smart, hip jazz intellectual ( hipster ). During this time he was also one of the first American jazz musicians to incorporate Latin American , Afro-Cuban and African elements into their compositions and improvisations. In quick succession he played with Chano Pozo , Lalo Schifrin , José Mangual Sr. , Mongo Santamaría and other specialists in Afro-Cuban and Latin American sounds. In later years he was a friend and promoter of younger Cuban talents such as Arturo Sandoval and Gonzalo Rubalcaba . Gillespie's opposition to racism led him to believe in the Baha'i , whose ideals attracted him and whose religion he adopted around 1970, which changed his lifestyle and public appearance. The “clown of bebop” became a serious musician who also campaigned for political goals, but without becoming politically active. In 1988 he founded the "United Nation Orchestra", with which he toured Egypt , Morocco and a little later Canada and South America .

His role as an integrating figure in jazz began as early as the 1950s when, after successes in Europe (e.g. Pleyel concerts in Paris in 1948 ) and appearances at “Jazz at the Philharmonic” in 1955, the State Department gave him the opportunity to do one To form big band, with which he went on a world tour until 1958 (his appearance in Athens in 1956 helped to reduce the anti-American tensions that had built up due to the Cyprus conflict and thus paid off for his financiers). After playing mostly in smaller combos in the 1960s, when he also worked with thirdstream composers such as Lalo Schifrin and Gunther Schuller , he went with the Jazz Giants ( Sonny Stitt , Thelonious Monk , Art Blakey and others) toured Europe and Australia and undertook a major Africa tour in 1973.

Dizzy Gillespie is one of the most popular figures in jazz, and musicians such as Miles Davis , Thad Jones and Kenny Dorham cited him as an important influence. Woody Herman called him a "jazz giant". Many of his pieces such as A Night in Tunisia , Groovin 'High and Woody' n You are among the jazz standards today . His trademark is the trumpet with its bell that is bent 45 degrees upwards (see photo) and its characteristic bulging cheeks, a phenomenon for which medicine has even created a technical term: "Gillespie pouch".

The musician Gillespie is recognized today in several ways: “as a sound visionary” who also developed “a completely individual virtuosity on the trumpet, as a composer, arranger and bandleader, as a singer with incomparable bebop vocals and as the staging of a highly explosive mixture of jazz and Afro-Cuban music. "

His autobiography , To Be or not to Bop , which he wrote together with Al Fraser, was published in 1979 by Doubleday . In 1985 John Holland made a film about a guest appearance in Havana ("Dizzy Gillespie - a Night in Havana" 1988).

He gave his last public concert in February 1992 in Seattle . In 1993, the year he died, he was elected to the American Academy of Arts and Letters . 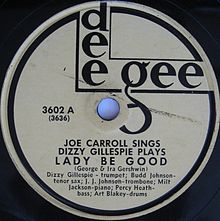 '78 shellac record by singer Joe Carroll with the Dizzy Gillespie Band: Lady Be Good on the short-lived label Dee Gee

As a front man

As a band member

With CTI All Stars

With Gene Krupa and Buddy Rich

With the Manhattan Transfer 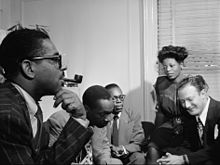