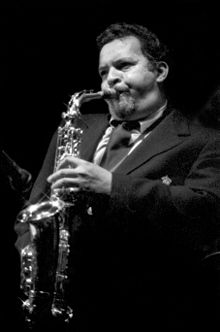 He is one of the pioneers of hard bop and worked a. a. with jazz greats like Miles Davis , Gil Evans , Sonny Rollins , Charles Mingus and Ornette Coleman . His voluminous sound, which stood out from the typical tone of the alto saxophone at the time, as well as his expressive, blues-colored playing and somewhat angular phrasing were his artistic trademarks.

John Lenwood McLean, called Jackie from youth , grew up in Harlem , New York City. He received lessons in jazz harmony from the virtuoso bebop pianist Bud Powell (who, like Thelonious Monk and Sonny Rollins, lived in McLean's neighborhood at the time). His talent and the lively jazz scene in the city at the time helped him to take part in temporary jobs in the band of the exceptional pianist Thelonious Monk, as well as substitute jobs for the alto saxophone giant Charlie Parker, who was often leveraged by drug abuse . In McLean's first band, Sonny Rollins played tenor saxophone, Kenny Drew piano and Percy Heath bass .

In 1949 he took as protégé of Miles Davis (with whom he played in 1951/52, Miles Davis Volume 1 ) on an LP entitled Dig , which made his playing heard in a wider audience. This was followed by further recordings under his own name on the Blue Note label , which presented him not only as a talented improviser, but also as a composer worth listening to. In 1955 he worked with his two compositions “Dr. Jackle ”and“ Minor March ”on Miles' album Miles Davis and Milt Jackson Quintet / Sextet . In 1956 the alto saxophonist played temporarily in Charles Mingus ' Jazz Workshop (1956), where he was involved in the album Pithecanthropus Erectus , and then with Art Blakeys Jazz Messengers (1956/7). Mingus dedicated a piece to him called Profile Of Jackie .

Jackie McLean struggled with drug problems, as a result of which he lost his license to perform in New York for a while. The musician compensated for the resulting negative economic consequences with intensive recording and publishing activities, initially for Prestige Records . During this time, he worked as a sideman on numerous recordings by George Wallington , Gene Ammons , Hank Mobley , Art Farmer , Art Taylor , Ray Draper , Kenny Burrell and Mal Waldron . Two of his most important LPs were created in quick succession on Blue Note Records , for which he recorded 21 albums from 1959 to 1967: A Fickle Sonance (1961) and Let Freedom Ring (1962). Especially in his formally free compositions Quadrangle and A Fickle Sonance , he flirted with the free jazz avant-garde of his time, but without completely detaching from the harmonic framework of hard bop.

1959 to 1961 he played as a musician and actor in the play The Connection by Jack Gelber with the Living Theater .

After various blowing sessions (ad hoc recording sessions of mixed up musicians) for Blue Note, he put together his first working band , consisting of Grachan Moncur III on trombone , Bobby Hutcherson on vibraphone and Tony Williams on drums . Several LP recordings followed, including One Step Beyond , Evolution and Destination ... Out! .

Towards the end of the 1960s , the commercial success of his record releases waned. McLean therefore began touring more and more and from 1968 to work as a teacher. In 1972 he was given a teaching position at the University of Hartford in Connecticut . He performed again in the 1980s, often with his son René (born 1946), who is also a saxophonist.

In 2001 he received the Jazz Masters Fellowship from the state NEA Foundation , the highest honor for jazz musicians in the USA.

McLean's musical oeuvre is diverse and gives a good insight into the trends in jazz since bebop. Especially for alto saxophonists it was difficult during and for many years after the soaring bebop to overcome the icon Charlie Parker and find their own language. Accordingly, McLean's early recordings still reveal the strong influence of his idol, while he steadily moved away from it in the 1950s . Already in the 1960s - u. a. with the help of his mentor Charles Mingus and the advent of free jazz by Ornette Coleman - the process of his artistic self-discovery is completed. He had found his own language, which he refined over the years and which did not prevent him from further researching musically.

McLean's most prominent feature, namely his sound, was not based on the sound ideal of a Johnny Hodges , which is common for alto saxophonists , but on tenor saxophonists such as Lester Young , Dexter Gordon , Ben Webster and Don Byas and helped him to achieve a particularly powerful tone and an above-average volume . Last but not least, this will to expressiveness made him one of the most sought-after hard bop players .

Directly linked to this is McLean's characteristic intonation , which can be assessed as "wrong" in the classical background, but was and is used in jazz as an element to increase expression.

In contrast to Parker's, McLean's phrasing was very clear and “simple” in his early years: no highly complex rhythmic structures with tempi changes, as in his predecessor, no bird-like flights of fancy that might leave the drummer's meter and beat but to the point precise phrasing, in most cases in line with the drummer . This corresponded to the philosophy of hard bop, in which jazz approached the groove-related rhythm and blues .

McLean, also known as an extraordinarily fast player, preferred eighth note lines, which he presented in an odd arrangement, often in question-and-answer fashion.

McLean's artistic path led away from the harmonic - typical of bebop - towards a modal style of play. If one compares his improvisation on Coleman Hawkins 'composition Bean And The Boys (LP  Makin' The Changes , 1957) with the improvisation on his own composition Melody for Melonae (LP  Let Freedom Ring , 1962), the following changes stand out:

"Getting away from the conventional and much overused chord changes was my personal dilemma. Until recently this was the reason why many things I composed in 1955 left me helpless when it came to a basis for improvisation, for example Quadrangle and A Fickle Sonance […] Today when I play Quadrangle , I use sections of scales and modes [… ] Today I'm going through a big change compositionwise, and in improvising Ornette Coleman has made me stop and think. He has stood under much criticism, yet he never gives up his cause, freedom of expression. The search is on "

The information relates to the date of recording: