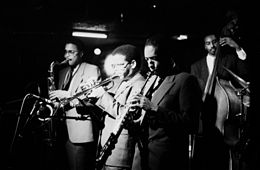 The Jazz Messengers , one of the well-known representatives of hard bop

The hard bop (also hard bop ) is a particularly distinctive jazz style that was developed in the 1950s of jazz history .

This continuation of bebop since mid-1950 was understood as an Afro-American counter-movement to West Coast jazz ( cool jazz ). The hard boppers simplified the technically challenging melody sequences of the bebop, but without giving up the intensity. For example, they used the fourth harmonic for this . In addition to the rhythmic drive of bebop, elements from soul and blues were recorded, which resulted in an overall "harder" style of play than the previous style. The traditional elements of the mentioned directions were technically developed to their limits. A subspecies of hard bop is soul jazz , which is even more straightforward.

Art Blakey and his Jazz Messengers were probably the best known representatives of this style for decades. Many hard boppers emerged from this band, such as the pianist Horace Silver (co-founder of the forerunner band of the Jazz Messengers), the trumpeter Clifford Brown and the saxophonist Lou Donaldson . Brown was also the co-director of the Max Roach Quintet, which was also instrumental in the development of this style. Musicians like the saxophonists Dexter Gordon , Sonny Rollins , Cannonball Adderley and the trombonists Curtis Fuller and JJ Johnson should also be mentioned here, but they can be assigned to other jazz styles. The same applies to Miles Davis and John Coltrane , who from 1956 added some hardbop-style pieces to their repertoire.

Important titles and musicians who interpret them