Horace Silver and the Jazz Messengers

The pianist Horace Silver came to Blue Note rather casually ; he participated in Lou Donaldson's first session in 1952. When the saxophonist had to postpone a second planned session, Silver was asked by Alfred Lion if he wanted to take over this appointment as band leader. The classic Quicksilver was heard for the first time on the resulting 10-inch LP, and Opus De Funk on the next trio album ( Horace Silver Trio BLP 1520) the following year . Towards the end of 1954 Lion wanted to record a new album with Silver, this time with brass. The pianist at the time had a quartet with whom he played at Minton's Playhouse in Harlem; his teammates were saxophonist Hank Mobley and bassist Doug Watkins . The line-up of Mobley and Watkins put together by Silver was supplemented by trumpeters Kenny Dorham and Art Blakey on drums. The band went into the studio on November 13, 1954 and recorded four pieces for a 10-inch LP; this was published under the name Horace Silver Quintet Vol. 1 (BLP 5058). One of the pieces was "Doodlin", a sophisticated blues at medium tempo with a backbeat and a relaxed soulful mood. The piece became one of the most famous titles of the soul-jazz wave in the 1950s and has been interpreted by a wide variety of artists, such as Ray Charles and Chet Baker . The other pieces of the November session were the blues "Creepin 'In", "Room 608" and "Stop Time". Room 608 and Creepin 'In were also released as single (Blue Note 45-1631). 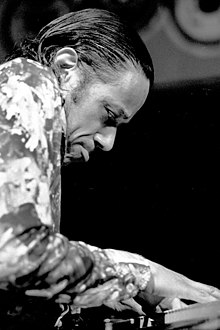 On February 6, 1955, Silver, Mobley, Dorham, Watkins and Blakey went back to the studio with Rudy Van Gelder to record another 10-inch album under Silver's direction ( Horace Silver Quintet Vol. 2 , 5062); the pianist created four more titles, including "The Preacher", which was released as a single with Doodlin ' (Blue Note 45-1630) and immediately became a jazz hit. Horace Silver later reported to Michael Cuscuna that Lion and Francis Wolff asked him during rehearsals to replace the title with an ordinary blues. The Preacher was based on an old number that was played at the end of dance evenings; Lion and Francis Wolff found the piece trivial. Art Blakey disagreed and urged Horace Silver to assert himself and follow his artistic instinct. Since the recording date would have had to be postponed to write a new piece, Lion finally gave in; “The Preacher” then became such a success that it helped Jazz Messengers achieve their breakthrough and saved the financially precarious Blue Note company from imminent bankruptcy. This enabled the record label to venture into the new 30 cm record business; The new edition of the album then appeared under its final title under the design of the newly arrived graphic artist Reid Miles .

The quintet recordings by pianist Horace Silver are among the essential works of early hard bop for jazz critics Richard Cook and Brian Morton; they rated the album with the second highest score. The music on the album mixes bebop influences with blues and gospel feelings. Brian Priestley emphasizes in the Rough Guide Jazz the importance of the sessions and their staff for the creation of Jazz Messengers , because as early as November 1955 Art Blakey recorded the legendary live album At the Café Bohemia with the same line-up under this name, which was taken over from Silver .