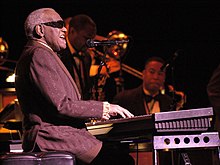 Ray Charles (* 23. September 1930 as Raymond Charles Robinson in Albany , Georgia ; † 10. June 2004 in Beverly Hills , California ) was an American singer , songwriter and composer . He is also known as the "high priest of soul". His influence shaped the development of rhythm and blues , blues , country and soul . In total, he has sold around 90 million records.

Ray Charles Robinson grew up at the time of racial segregation, together with his brother George, in poor conditions with his mother Aretha. He learned to play the piano in a backyard near his housing estate. He went blind from glaucoma at the age of seven . Nine months earlier he had seen his brother drown in a washtub . He attended St. Augustine's School for the Deaf and Blind, where he received extensive musical training. His mother, who raised him alone, died in May 1945 when Ray Charles was 14 years old. During this time he left the school for the blind and began to build his career as a freelance artist. 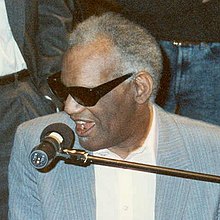 Ray Charles started out as a musician in Florida and moved to Seattle in 1947 . There he recorded his first records in November 1948 as a member of the Maxin Trio with Gosady D. McKee, guitar, and Milton S. Garred, bass. The first single Confession Blues / I Love You I Love You was released in February 1949 on the small label Down Beat Records in Los Angeles. The title achieved a remarkable debut success with second place on the Rhythm & Blues hit parade . His early recordings belonged to Rhythm & Blues and adapted Charles Brown or Nat King Cole . In the same year the band was renamed the Ray Charles Trio , members besides him (vocals / piano) were now Gosady McKee (guitar), Mitchell "Tiny" Webb (guitar) and Ralph Hamilton (bass). In the meantime, Down Beat Records had been renamed SwingTime Records, where the single How Long Blues / Blues Before Sunrise (# 178) was released in 1949. After a total of six singles, Charles had assembled a larger orchestra, consisting of Teddy Buckner (trumpet), Marshall Royal (alto saxophone), Jack McVea (tenor saxophone), Charles Waller (baritone saxophone), Louis Speiginer (guitar), Billy Hadnott (bass) and Clifton "Rudy" Pitts (drums). Under the name Ray Charles Orchestra, four recordings were made on May 25, 1950, which were divided into two SwingTime singles. He stayed with that label until September 1952 and was signed to the great rhythm and blues label Atlantic Records for a transfer fee of $ 5000 .

It was not until Atlantic Records (1952-1959) that his music became unmistakable in several ways (singing, instrumental style, composition, arrangement), as he emphasized gospel and jazz influences . With the combination of rhythm & blues and gospel, Charles became one of the most important pioneers and musicians of soul, supported by the entrepreneur Ahmet Ertegün and the producer Jerry Wexler . His first success was Mess Around , which goes back to CC Davenport's Cow Cow Blues and whose lyrics are based on the boogie classic Pinetop's Boogie Woogie (1929) by Clarence 'Pinetop' Smith . It was not until May 17, 1953 that It Should Have Been Me was selected from seven tracks in this recording session , and it reached fifth place on the R&B charts. His sixth Atlantic single, I've Got a Woman , recorded on November 18, 1954 in Atlanta, was his first number one hit on the R&B charts. The top placement he managed three more times, with the single What'd I Say released on June 27, 1959, becoming his biggest hit on Atlantic Records. After a total of 28 singles, 13 of which reached the top 10 of the R&B charts, Ray Charles switched to ABC-Paramount on November 1, 1959 .

He also celebrated commercial success with the new label ABC-Paramount under the producer Sid Feller. With Georgia on My Mind (published on August 19, 1960) he picked up a jazz standard and landed with it the second million seller . For the first time he was even able to occupy the top position in the pop charts. The blues-intensive sounds at Atlantic Records had given way to pop arrangements with violins on ABC Records. Hit the Road, Jack was released on August 21, 1961 and also sold over a million copies. His biggest hit came on April 23, 1962 with I Can't Stop Loving You , a country classic that sold over two million times. The girl group The Raelettes , which accompanied his career until the 1970s , continued to serve as the background choir .

The latter title came from the epochal album Modern Sounds in Country and Western Music , published in April 1962 and sold in over 500,000 copies . For this also were Born to Lose , You Do not Know Me and Careless Love decoupled. This was followed by hits like Crying Time , Busted and Take These Chains From My Heart . In 1966 he produced Lets Go Get Stoned by Ashford & Simpson . He had another success with his version of America the Beautiful in June 1972.

Ray Charles also had numerous duet partners. He sang with George Jones , Hank Williams Jr. , Johnny Cash , Willie Nelson and Merle Haggard, among others . Even if his chart success waned, the enthusiasm for his intensive live performances was unbroken. The financially most successful black entertainer of his generation is mentioned by numerous musicians as an important source of influence.

Charles was married twice: from 1951 to 1952 to Eileen Williams and from 1955 to 1977 to Della Beatrice Howard, with whom he had three children. He also had some relationships, even outside of his marriages, which resulted in nine more children. His long-term friend until his death was Norma Pinella. His children, sorted by age:

In the 1950s, Charles began using drugs while touring. In addition to alcohol and marijuana , he also used heroin . As a result, he came into the sights of the drug search. After being arrested for drug use in the 1950s and 1961, he was sentenced to five years probation in 1964. Then he went on a drug addiction treatment. He has lived without drugs since the late 1970s.

Ray Charles died on June 10, 2004 at the age of 73 of liver cancer surrounded by loved ones in Beverly Hills . He was buried on June 18, 2004 in Inglewood Park Cemetery in Inglewood near Los Angeles. BB King , Glen Campbell , Stevie Wonder and Wynton Marsalis played in his honor at the funeral.

Charles had guest appearances in the films Blues Brothers and Agent 00 - With the License to Dead Laugh , in the children's show Sesame Street , as well as in the US sitcoms Who's the Boss? , The Nanny , The Model and the Snoop and the Bill Cosby Show , he also sang in the sixth and seventh seasons of the sitcom Man Must Not Be in the opening credits of his version of Georgia On My Mind , in which he can also be seen alongside the main cast in the former was. In 1965, he played the leading role in the film Halt die Schlüssel HOT , a feature film which, based on a framework story, Charles's friendship with a blind boy, showed excerpts from his concerts.

Charles' first half of life was filmed in 2004 under the title Ray . The film by director Taylor Hackford (screenplay: James L. White ) tells parts of the life story of Ray Charles - starting with his trip to Seattle to the appointment of Georgia On My Mind to the state title of Georgia and the lifting of exile and with flashbacks to his childhood . Leading actor Jamie Foxx received an Oscar for best actor for his portrayal of Ray Charles . Alexis Spraic made a two-hour documentary in 2010 in which David Duchovny presented Ray Charles' America . 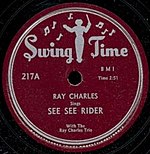 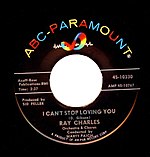 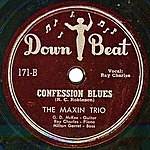 Single discography (with date of publication, label catalog in brackets)