Jamie Foxx (* 13 December 1967 as Eric Marlon Bishop in Terrell , Kaufman County , Texas ) is an American actor , musician and comedian . He became the third African-American actor for a starring role with the Oscar awarded.

Jamie Foxx grew up with his grandmother; his parents divorced when he was seven months old. Under pressure from his grandmother, he learned to play the piano. Foxx wanted to go to the Army after school , but got the advice from his trainer to make something of his artistic talents. So he began a career as a stand-up comedian in small clubs in Los Angeles , where he imitated Ronald Reagan , among others . He appeared in the TV comedy In Living Color in the early 1990s . He became known in the USA with the sitcom Jamie Foxx Show, which has been broadcast since 1996, and various other sketch shows. In 1997 and 2000 he went on tour with his program. The stage name Foxx he chose is a tribute to the American comedian Redd Foxx , who in turn had chosen his stage name based on the baseball star Jimmie Foxx , who died in 1967, the year Jamie Foxx was born. 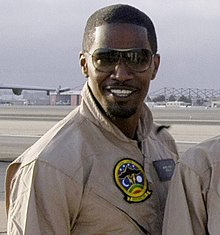 Foxx also celebrated successes musically. His first album, Peep This, climbed to # 12 on the US Billboard charts in 1995. The follow-up work Unpredictable even briefly reached first place in December 2005. In 2010 he sang with We Are the World 25 for Haiti , thereby campaigning for Haiti .

His first film role he took on the side of Robin Williams in the film Toys . After initially acting in comedies, he got his first serious role in the football drama Every Damn Sunday from Oliver Stone . His breakthrough role as the opponent of Tom Cruise in Collateral (2004) earned him his first Oscar nomination (2005, for best supporting actor). For the film Ray (2004), in which he played the blind legendary musician Ray Charles , he won the 2005 Golden Globe in the category of Best Actor in a Comedy / Musical and the Oscar for Best Actor. Foxx became the third African-American actor to win an Oscar for a leading role after Sidney Poitier (1963, Lilien auf dem Felde ) and Denzel Washington (2002, Training Day ) .

In 2007 he starred alongside Jennifer Hudson , Anika Noni Rose and Beyoncé Knowles in the film Dreamgirls , which won two Academy Awards.

For the US 3D animation film Rio (2011) he dubbed the yellow belly girl Nico.

Foxx is the father of two daughters.

Foxx's voice actor is mostly Charles Rettinghaus . In some films he is also spoken of by Dietmar Wunder , among others in Stichtag , since Rettinghaus already Robert Downey jr. synchronized. 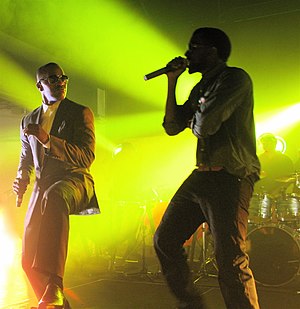 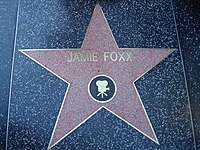 Foxx 'star on the Hollywood Walk of Fame

After Frank Sinatra , Cher , Barbra Streisand , Bing Crosby and Eminem , he is the sixth artist to both win an Oscar and land a number 1 hit.