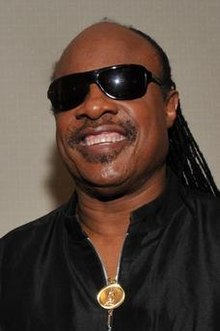 Stevie Wonder (* 13. May 1950 as Stevland Hardaway Judkins Morris in Saginaw , Michigan ) is an American Soul - and pop singer, composer , multi-instrumentalist and producer . He celebrated his first successes in 1961 with the Motown label, where he still publishes his albums today.

In the early 1970s he became one of the most successful entertainers in the USA. He is considered to be the “innovator” of black music, whose varieties - spiritual , blues , R&B , soul, funk - he mastered and developed. Especially the years 1971 to 1976 with the albums Music of My Mind , Talking Book (1972), Innervisions (1973), Fulfillingness' First Finale (1974) and Songs in the Key of Life (1976) are considered to be his artistically most important phase.

At the same time Stevie Wonder became increasingly politically active; With his human rights campaign, launched in 1980 , he achieved that Martin Luther King's birthday has been a public holiday in the United States since 1986. Wonder has won several of the most important prizes in the entertainment industry such as the Grammy , Oscar and Golden Globe . In 1989 he was inducted into the Rock and Roll Hall of Fame for his services to soul music . He has also been the UN Ambassador for Peace since 2009 .

Stevie Wonder is the third of six children of the songwriter Lula Mae Hardaway (1930-2006), his father was Calvin Judkins. Wonder was born prematurely and was ventilated with high oxygen concentrations in the incubator . This led to retinopathy of prematurity and ultimately blindness . When Wonder was four years old, the family moved to Detroit , where he sang in the church choir . By the age of nine he mastered the piano , harmonica and drums .

Ronnie White from The Miracles discovered him in 1961 . This helped him to an audition date with the Motown boss Berry Gordy , who then signed him. Little Stevie Wonder made his first records in 1962: A Tribute to Uncle Ray (with cover titles by Ray Charles ) and The Jazz Soul of Little Stevie . A first success came in 1963 with the title Fingertips, Part 2 , in which Stevie Wonder played and sang the harmonica. The song was recorded live at a Motor Town Revue , with young Marvin Gaye on drums. The accompanying album The 12 Year Old Genius became Motown's first number one LP. At 14, Wonder's voice broke . He was studying classical piano at the Michigan School for the Blind at the time.

At the age of 18, Wonder began to influence the compositions and arrangement of his music on a larger scale : For Once in My Life (1968) and My Cherie Amour (1969) landed high in the charts as albums and single hits . In the early 1970s he was one of the most successful musicians in the Motown family. He took the opportunity to set up his own recording studio, significantly increase his royalties and gain greater control over his music. He started his own label, Black Bull Music. Over the years he developed his own style and thus had a lasting influence on soul music .

From 1970 to 1972 Stevie Wonder was married to the singer and songwriter Syreeta Wright. He also produced her first two albums and wrote numerous songs with her ( Signed, Sealed, Delivered I'm Yours, 1970; Never Dreamed You'd Leave in Summer , 1971; Come Back As A Flower , 1979). Syreeta's first top 20 hit in the UK, Your Kiss Is Sweet (1975), was also written by both of them. Never Dreamed You'd Leave in Summer was from Joan Baez and Phil Collins gecovert (Album Going Back ). Syreeta also worked as a background singer on songs by Wonder.

In 1972 Wonder brought out the album Talking Book , which contains outstanding soul and funk numbers with the songs You Are the Sunshine of My Life and Superstition . Superstition is seen by many keyboard players as a lesson in funky clavinet playing . Guitarist Jeff Beck assisted him on the song Lookin 'for Another Pure Love on this album . In the same year, the album Music of My Mind was released , which he recorded largely on his own, except for the guitar in the piece Superwoman , played by Buzz Feiten , and the trombone in the first piece and the background vocals.

In 1973 the album Innervisions followed with the hit Living for the City . In 1974 the album Fulfillingness' First Finale , 1976 Songs in the Key of Life was released , which includes some hits with the pieces Sir Duke , I Wish , As and Another Star . In addition, the song Pastime Paradise appeared on this album , which served rapper Coolio in 1995 as inspiration and sample source for his title Gangsta's Paradise . Wonder was supported on this album by 19-year-old Greg Phillinganes and Herbie Hancock on keyboards and George Benson on guitar. In 1979 he bought the KJLH radio station in Los Angeles for two million US dollars and founded the operating company Taxi Productions especially for this purpose. 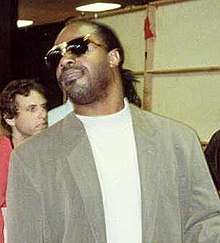 Increasingly, the artist was involved in the American civil rights movement for equality for African Americans .

In 1987 he sang the duet Just Good Friends with Michael Jackson on his album Bad . His record productions, which appear at ever larger intervals, were criticized as being below the artist's possibilities. For his 1995 solo album Conversation Peace he took eight years. In between he worked on the soundtrack to Spike Lee's Jungle Fever , with whom he is friends and at whose wedding he also played in 1992.

In 2005, after a long break, he again gained greater attention with the funk single So What the Fuss with Prince on guitar and the group En Vogue as a supporting voice. The critically acclaimed new album A Time 2 Love was released in October 2005. In 2007, Wonder and Tony Bennett won the Grammy Award for Best Collaboration with Vocal - Pop for the joint song For Once in My Life .

In 2007 and 2008, after a ten-year break, Wonder went on a world tour that also took him to Germany in autumn 2008. The concerts were enthusiastically received by the audience and critics. In January 2009 he released the song All About the Love Again for the inauguration of the President of the United States , Barack Obama . Previously, he had strongly supported Obama in the election campaign. In early 2009 the DVD Live at Last: A Wonder Summer's Night was released . In September 2014 Stevie Wonder announced that he would be going on a multi-week US tour in November / December 2014, the program of which consists exclusively of songs from his 1976 album Songs in the Key of Life . In December 2013, on the occasion of his annual benefit concert House Full of Toys , he had performed the entire album with several guest musicians. This tour continued in both March / April and September to November in 2015 within the USA and Canada. The only European concert with this program to date took place in London in Hyde Park in July 2016 .

At Christmas time 2015 Stevie Wonder sang the song Someday at Christmas together with soul singer Andra Day for a commercial for the US company Apple . On the 50th anniversary of Martin Luther King's death on April 4, 2018, Stevie Wonder started the #DreamStillLives campaign . Stevie Wonder's aim is to revive the memory of the dream of an America without racism . The campaign is supported by 70 celebrities such as Barack Obama, Paul McCartney, Bon Jovi and Bruce Springsteen .

At the funeral service on July 7, 2009 on the occasion of the death of Michael Jackson , he appeared with a speech and sang his two songs Never Dreamed You'd Leave in Summer and They Won't Go When I Go .

Likewise, Stevie Wonder spoke at the funeral service for Whitney Houston on February 19, 2012, and then sang Ribbon in the Sky ; he had changed some lines of the lyrics of his song in honor of the deceased.

In June 2012 he performed at Buckingham Palace on the occasion of the diamond jubilee of Queen Elizabeth II of England.

On the occasion of Prince's death (April 21, 2016), a tribute evening in honor of the musician took place on October 13, 2016 in Saint Paul (US state Minnesota) in the Xcel Energy Center , on which Wonder also performed.

Wonder's marriage to Syreeta Wright ended in divorce in 1972. Both remained friends until Syreeta's death in 2004. In 2001, Wonder married fashion designer Karen Millard. In autumn 2012 he announced the separation from his wife; the marriage was divorced in October 2015. He has been married to Tomeeka Robyn Bracy since July 2017.

In 1999 he received the "unofficial Nobel Prize for Music ", the Polar Music Prize .

Stevie Wonder has received 25 Grammys to date. In 1985 he was awarded the Golden Globe for the soundtrack to the film The Woman in Red . For his title song I just called to say I love you , he also received an Oscar for best song at the 57th Academy Awards in 1984 . On February 25, 2009 he was awarded the prestigious Gershwin Prize by the American President Barack Obama . In 2014 he was awarded the Presidential Medal of Freedom .