from Wikipedia, the free encyclopedia
This is the spotted version , flagged on May 31, 2020 . There is 1 pending change that has yet to be viewed.

Saint Paul [ seɪntˈpɔːl ] (abbreviated St. Paul ) is the capital and second largest city of the US state Minnesota . It is also the administrative seat of Ramsey County . In 2019 , Saint Paul had 308,096 inhabitants. The city is east of the Great Plains and southwest of Lake superior , the upper Great Lakes at the confluence of the Minnesota and Mississippi rivers and forms with Minneapolis the Twin Cities metropolitan area ("twin cities").

The story of Saint Paul begins in the early 19th century when the first traders, explorers and missionaries immigrated from southern Canada and settled in the area of ​​what is now the city. They were mostly of French origin and sought protection at the nearby Fort Snelling .

Favored by the location on the Mississippi River and Minnesota River , a trading center developed. In 1841 Galtier founded a church there named Saint Paul , after which the settlement was named.

In the following years St. Paul continued to grow and finally in 1854 it became an independent city and the capital of Minnesota.

The city is divided into different residential areas:

View of the Minnesota State Capitol

View of Saint Paul from the Minnesota State Capitol

Saint Paul is particularly important in the cultural field. The focus here is on the numerous historical museums. The city is the seat of the Archdiocese of Saint Paul and Minneapolis . 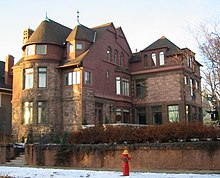 The National Park Service has three National Historic Landmarks for Saint Paul : the F. Scott Fitzgerald House , the James J. Hill House, and the Frank B. Kellogg House . 103 buildings and sites in the city are listed on the National Register of Historic Places (NRHP) (as of November 7, 2018).

Locomotion in Saint Paul is mainly by private vehicles. As an alternative, there is a local public transport system , which uses buses and a tram line to connect downtown to Minneapolis and the outskirts. In the past few years, the rapid growth of the Twin Cities has resulted in a strong increase in traffic, so that the traffic volume is very high during rush hour and traffic jams and waiting times must be expected.

A special feature in Saint Paul are the so-called skyways , which connect various buildings in the city center with closed bridges and tunnels. They offer protection from the extreme cold in winter and the possible heat in summer.

The main airport is Minneapolis-Saint Paul International Airport in Minneapolis. It was the home airport of Northwest Airlines (now taken over by Delta Air Lines ) and is one of the ten largest airports in the United States.

St. Paul is the headquarters of:

Saint Paul has twinned cities with the following cities:

Jonathan Franzen's novel Freiheit is set in St. Paul, among other places.