The colors of the university are maroon and gold.

With around 50,000 enrolled students, the Twin Cities Campus is by far the largest campus in the university and the sixth largest in the United States. It is traversed by the Mississippi River and accordingly divided into the East Bank and West Bank . The East Bank is the significantly larger part; the main buildings of the university are housed here. It covers an area of ​​124 ha and is subdivided into further areas for better navigation on the campus: the Knoll Area , which forms the oldest part of today's campus and mainly houses the human sciences ; the Mall Area (also Northrop Mall ), on which the natural and engineering sciences are located; the Health Area , which includes the areas of biology and pharmacy ; the Gateway Area in the east, which mainly houses administration buildings; as well as the Athletic Area , on which the sports facilities and the swimming pool are located.

There are also some notable buildings on the East Bank. The Armory is a castle-like building that was built in 1896 after the building previously located there burned down in a major fire in 1894 . Originally the building served as a residence for the professor of military science . In addition, the are Pillsbury Hall and the Weisman Art Museum on the East Bank.

On the much smaller part of the West Bank with a size of 21 hectares, there are predominantly art and music science buildings , including the dance and music school .

Washington Avenue Bridge , which connects the two parts of the Twin Cities Campus across the Mississippi River .

The two parts are connected by the Washington Avenue Bridge . The bridge is two-story: while vehicles can cross the Mississippi on the lower part, the upper part can be used by pedestrians and cyclists.

The campus is accessed by the Metro Green Line , which connects the inner cities of the two twin cities and crosses the campus in between.

The university's sports teams are known as the Golden Gophers . The university is represented by an American football team in the Big Ten Conference , which plays in the TCF Bank Stadium . There is also an ice hockey team that plays in the NCAA's Western Collegiate Hockey Association and plays home games in the Mariucci Arena .

The women's basketball team was named one of the top four college teams in the United States in 2004.

The university also operates its own radio station . 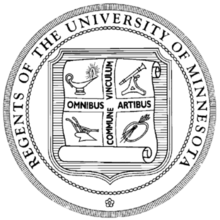