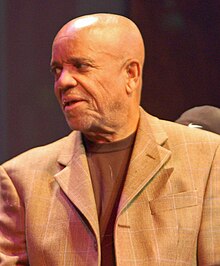 Berry Gordy Jr. (born November 28, 1929 in Detroit ) is an American songwriter , record producer and entrepreneur . In 1959 he founded the soul label Tamla Records and Motown Record, from which the Motown record company emerged .

Berry Gordy was one of eight children of Berry Gordy sr. and Bertha Fuller. Berry Gordy fought a total of 17 featherweight boxing matches between December 1947 and January 1950 (12 won, 3 lost, 2 draws). In 1951 he was drafted into the army, where he made up his school leaving certificate, the GED . After his release, he opened the 3-D Record Mart record store with jazz records in 1953, which shortly after went bankrupt . In the same year he married Thelma Coleman. From 1955 he worked on the assembly line at Ford Motor Company for two years for $ 85 a week . There he built upholstered seats in the Lincoln models. During his spare time he wrote pop songs.

He was able to sell his first composition Reet Petite to Decca Records in August 1957 for $ 1000 ; she reached with singer Jackie Wilson in September 1957 number 62 on the US pop hit parade and number 6 in the British charts. Gordy wrote four more consecutive hits for Wilson. To Be Loved reached 1,958 rank 22 of the pop charts in April and climbed to number 7 of the rhythm and blues - hit parade . Gordy and Wilson achieved their breakthrough with Lonely Teardrops , when the song reached number one on the R&B charts and number 7 on the pop charts after it was released in November 1958. This was followed by That's Why (I Love You So) (April 1959, No. 2 R & B) and I'll Be Satisfied (June 1959; Rank 6 R & B). Despite the success of his compositions, royalties were scanty. In 1959 Gordy divorced and married the trained musician Raynoma Liles. She advised him to take responsibility for a composition until it was finished with the music itself.

With $ 800 on loan from his family - money from his education insurance - Gordy founded two R&B record companies in Detroit in 1959 at the age of 29, " Tamla Records " (January 12, 1959) and "Motown Records". This enabled him to avoid the fines that were customary at the time, which were due if bribes were suspected if too many songs from just one label were played on the radio.

The first singer at Tamla Records was Marv Johnson , for whom Gordy wrote Come to Me , which was created in 7 takes in January 1959 at United Sound Studio and released on February 21, 1959 (Tamla # 101). In Barrett Strong he found another singer, for whom he wrote the title Money (That's What I Want) in July 1959 . It was first released on Tamla Records (# 54027) in August 1959. After the airplay by the disc jockey Larry Dixon from the Detroit radio station WCHB, however, there was such a great demand that Gordy licensed the rights to his sister Gwen Gordy and her label Anna Records . The Anna Records label had a better distribution system and released the single again on December 10, 1959 (Anna 1111). After an advertisement in Billboard magazine from January 4, 1960, the single reached the Rhythm & Blues chart on January 25, 1960, where it climbed to second place; it reached number 23 in the pop charts. Now the income flowed faster, so that on August 2, 1959 he was able to purchase a single-family home (2648 West Grand Blvd.) in Detroit for $ 10,500. There he built a small recording studio , the Motown Recording Studios (Detroit) . On April 14, 1960, the two companies Tamla and Motown were merged to form the new company "Motown Record Corporation".

The first million seller was Shop Around (Tamla 54034), written by Gordy and Smokey Robinson for the Miracles , which, after being published on September 20, 1960, reached number 1 in the R&B and number 2 in the pop charts. In this hit, the Miracles were accompanied by the label's own studio musicians who made a name for themselves as Funk Brothers . Gordy completed these musicians after the hit Money (That's What I Want) , where two future Funk Brothers were already present. They also played for the next million seller, Please Mr. Postman , published by the Marvelettes in August 1961 , which Gordy discovered. Gordy was the composer of the Contours hit Do You Love Me , which was released in June 1962.

From 1964 onwards, million-sellers started appearing at Motown with an intensity that had never been seen before at any record label . As a result, only Motown succeeded in countering the British Invasion with successful American music productions . The Supremes were initially able to boast three singles with million seller status, namely Baby Love with 3.496 million (recorded on August 13, 1964), Where Did Our Love Go (2.72 million; April 8, 1964) and Come See About Me ( 1.87 million; July 13, 1964). At the same time, two Supremes LPs were gilded several times ( Supremes A Go-Go with 3.469 million and Where Did Our Love Go with 3.225 million). Mary Wells had others with My Guy (March 3, 1964), the Temptations with My Girl (November 17, 1964; 1 million) and the Four Tops with I Can't Help Myself (April 9, 1965; 2.5 million) outstanding bestsellers.

Headquarters of the record company

From then on, Gordy used the eight-room house as the headquarters of the Tamla Motown Group - visible through the "Hitsville USA" sign attached to the house. The Motown Group was created on April 14, 1960 through the merger of the Tamla and Motown Records labels, further companies and sub- labels were added over time. Gordy found teams of authors and producers such as Holland – Dozier – Holland , Ashford / Simpson and Whitfield / Strong, who, together with the Funk Brothers, developed the - albeit not homogeneous - Motown sound. By adding violin and brass sections, it was possible to develop the sound from pure rhythm & blues, which enabled a crossover into the pop hit parades. This in turn opened up white populations with more affluent purchasing power and brought the group higher sales figures. As a result of expansion, Gordy bought the neighboring building 2244-2246 West Grand in April 1961, and West Grand Blvd. Acquired 2650-2652.

In the spirit of his former employer Ford, Gordy tried to keep the value chain in the group as much as possible, analogous to Fordism (in-house studio band, studio technicians, composers, music producers, music publishers, talent management for interpreters). With the music recordings he introduced a quality control like in the nearby Ford car factory, in that the recordings produced per week were presented to a management team and examined by them. Despite mass production, no piece of music left the group before it was released; that became a role model in the music industry . Of the 25 top hits in the US in 1965, 10 were from Motown, and between 1964 and 1967 there were 14 top 1 hits from Motown.

Development of the group

In September 1966 Gordy acquired the local competitor Golden World / Ric-Tic Records along with repertoire (such as Edwin Starr ) and recording studio for 1 million US dollars . Further expansion required the Motown Corporation to move to the 10-story Donovan Building in Detroit (2457 Woodward Avenue) in 1968 .

Exactly in that year, on August 29, 1968, the group's legal dispute began against the most successful team of authors and producers, Holland / Dozier / Holland, which between 1963 and 1968 accounted for 39 of the 91 US top 20 listings of the Motown group (i.e. 42%) was responsible. Their balance was even clearer if one examines the group's 17 top hits during this period. Of these, twelve (or 70%) were registered for HDH (or at least one team member) by copyright. In total, HDH were responsible for 70 top 10 hits and 50 top hits. These top hits included 13 consecutive top hits. The Motown corporation, which is otherwise so reluctant to publish figures, had to disclose during the trial that HDH had received royalties of 2.2 million US dollars between January 1965 and June 1968. HDH responded to this in December 1968 with a counterclaim for fraud and fraudulent misrepresentation over 22 million US dollars, because the composers believed that the group's own music publisher Jobete was not sufficiently accountable for the royalties to be paid for the sum mentioned . On January 3, 1972, the mutual complaints were settled through an out-of-court settlement - with mutual confidentiality.

As a replacement for HDH, Gordy developed the team of authors Norman Whitfield / Barrett Strong , which changed the Motown sound with stylistic elements from funk and psychedelic rock from October 1968 and set new accents. At the same time, there was a move away from the love issue to socially critical content. Ashford & Simpson also ensured for a short time that the artists of the Motown group could continue to be supplied with song material.

In June 1972 the entire group moved to Los Angeles , now trading as "Mowest". In addition to the local one, this also brought about a personal break. The Funk Brothers ended their collaboration, and new recording studios were set up in Los Angeles. The record sales remained at a high level thanks to the success of The Jackson Five , Commodores with Lionel Richie as a soloist or Stevie Wonder . Motown had 90 number one hits in 1975 and rose to become the biggest black music label.

Berry Gordy's greatest attention was the Supremes lead singer Diana Ross . He had in mind to turn Diana Ross into a kind of "black Barbra Streisand ". The high point of the close collaboration was Gordy's entry into the film business as a producer, arranging for Ross to play the title role in the film Lady Sings the Blues (1972) about the troubled life and difficult career of Billie Holiday . The film was nominated for several Academy Awards, and Ross was nominated for Best Actress for her screen debut. At the award ceremony, however, the film went without a distinction - a bitter disappointment for Ross.

Other film projects in which Gordy personally took care of the production ( Mahogany , October 8, 1975, and The Wiz - The Magical Land of Sidney Lumet with Michael Jackson , October 24, 1978) did not bring the desired results for either the producers or Ross Success. For Gordy, it was a huge disappointment when Ross decided to leave Motown in May 1981. She signed a $ 20 million contract with RCA , but could no longer build on previous successes. When Diana Ross returned to Motown in 1989, Gordy had already sold his company. - Berry Gordy produced a few films up to then, including John Badham directed the sports comedy The Bingo Long Traveling All-Stars & Motor Kings (1976) with Billy Dee Williams , James Earl Jones and Richard Pryor based on the novel by William Brashler. And Taimak and Vanity played in The Last Dragon (The Last Dragon, 1985), a mixture of martial arts - and Blaxploitationfilm .

Sale of the group

In June 1988 Gordy sold the Motown group to MCA / Boston Ventures for $ 61.9 million, in August 1993 this joint venture sold to PolyGram for $ 325 million. PolyGram itself (and with it Motown) was acquired in May 1998 by Seagram , who already controlled the Universal Music Group . In December 2000 Vivendi Universal took over the Universal Music Group, making it the world's second largest media group.

Gordy had also sold his 50% stake in his music publisher Jobete to the EMI Group in July 1997 for US $ 132 million . The music publisher's catalog of over 15,000 titles generated gross revenues of around $ 25 million in 1996. Gordy had sold because he found the business climate too unfavorable. In April 2003 EMI acquired another 30% from Gordy for 110 million US dollars, and in April 2004 bought the remaining 20% ​​for 88 million US dollars. With that Berry Gordy had lost the last control over his former Motown concern.

Gordy has been married four times and has four children. His son Kennedy William Gordy released three music albums under the stage name Rockwell in the 1980s . Another son, Stefan Kendal Gordy , founded the electro / hip-hop duo LMFAO together with Berry's grandson Skyler Husten Gordy . Gordy lived with Diana Ross for a while; from this connection comes his daughter Rhonda Ross Kendrick (born August 14, 1971 as Rhonda Suzanne Silberstein). On July 7, 2009, Berry Gordy delivered a speech at the memorial service for Michael Jackson at the Staples Center in Los Angeles .