The engine of a Sukhoi Su-22

Aircraft engines is a collective term for generating propulsion for an aircraft used engines . If necessary, propellers and gears are also included, which, although not actually generating power, are used to develop propulsion. The drive enables the aircraft to receive the (propulsive) power in order to actively lift off the ground, gain altitude independently and move forward in the airspace. For technical systems, gravity can sometimes be used as a drive , but an aircraft can only glide with it or, using updraft , glider .

In civilian aircraft, the term of the drive system (engl. Propulsion system ) delimit, one from engine cowl and thrust reverser existing assembly can designate.

After the development of non-powered gliders (mainly by Otto Lilienthal ), the main problem for long-term cross-country flights was that the weight prevented maintaining the flight altitude. The energy required to overcome the force of gravity could not be made available. The first attempts consisted in using the buoyancy generated by heated air or gases ( Montgolfière and Ballon ). Updrafts were and are used by gliders . It was only with the availability of light, powerful aircraft engines that aircraft heavier than air could lift themselves into the air on their own, gain altitude and fly distances without losing altitude. 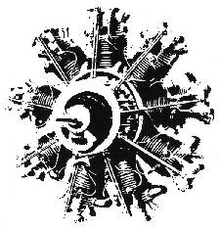 There are a large number of different types of propulsion for aircraft. Combustion engines are mainly used to this day . They are divided into the two groups of air-breathing and non-air-breathing drives. A thrust reverser is used to reverse the direction of thrust of an engine (see also vertical takeoff and landing ).

Air-breathing drives draw the oxygen required to burn the fuel from the ambient air .

An aircraft engine (also known as aircraft engine) is an internal combustion engine (most commonly in the form of a reciprocating piston engine ) that has been specially designed for use in an aircraft. It provides mechanical power to a shaft ("shaft power"; see also rotational energy ) and drives the propeller , usually via a propeller gear . Common designs of reciprocating aircraft engines are radial , in- line or boxer engines . 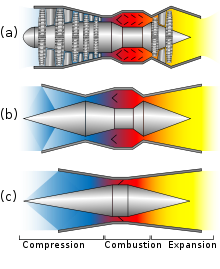 Cross-sections in comparison:
(a) Turbojet ("gas turbine")
(b) Ramjet
(c) Scramjet.
On the left the compression, in the middle the combustion and on the right the hot gas outlet.

Turbine jet engines are based on the gas turbine .

In a ramjet engine, the inlet air is compressed in a similar way to a turbojet, burned together with the fuel in the combustion chamber, and the resulting hot gas is led to the outside via the thrust nozzle. The compression takes place by narrowing the cross section of the inlet. Since there is neither a rotating compressor nor a turbine to drive it, the ramjet engine has largely no moving parts.

Since a ramjet engine requires considerable forward movement through the air to compress it (usually at least several hundred km / h, a scramjet usually supersonic), it cannot work when the aircraft is stationary.

In the ramjet , compression and combustion take place at “local subsonic” - from the point of view of the engine, the air does not flow through these engine areas at supersonic speed. In the scramjet , the entire engine is flowed through with “local supersonic”.

In contrast to the ramjet engine, the deflagration jet engine works in a pulsating (non-continuous) manner and has a very simple structure. It consists of a jet pipe with a combustion chamber and flutter or louvre valves. These let air into the combustion chamber from the front, but close automatically if a counterflow is attempted. The fuel supplied ignites and the expanding hot gas can only leave the nozzle to the rear. There are also designs without blinds that are based on "aerodynamic valves".

When using the term “non-breathing”, it is usually implicitly assumed that the type of drive is still based on combustion. With these types of propulsion, the required oxidizer is carried in the aircraft. Usually it is a liquid oxygen carrier.

In rocket propulsion , the combustion in the rocket engine leads to a strong expansion that is carried out by the thrust nozzle. The resulting hot gas, the so-called support mass , spreads in a certain direction, according to the Actio and Reactio laws , the missile is propelled in the opposite direction.
The rocket engine is a (non-air breathing) jet engine. Either the fuel already contains the oxygen required for the oxidation, or the oxygen is carried separately; the expansion of the fuel can also be based on molecular disintegration (no combustion). In all cases, no oxygen from the environment is required.

Other types of drive

Other types of drive have so far only played a minor role:

Small aircraft often only have one drive unit, larger ones usually have several similar units - mostly not more than four, mostly mounted next to each other with mirror symmetry to the fuselage. You achieve a sufficient overall thrust, more favorable loading of the aircraft structure, redundancy in the event of an engine failure and / or other aerodynamic advantages.

Aircraft for commercial passenger aviation must be equipped with at least two engines. This achieves a high level of security through redundancy. At the same time, the highest level of economy is achieved with two engines; more engines would mean more maintenance and more fuel consumption. This is why most commercial aircraft (and almost all new aircraft) have two engines installed. For long-haul and ultra-long-haul flights, the ETOPS rules restrict which route may be taken, depending on the distance to available alternative airports , the airline's ETOPS approval and the aircraft's ETOPS approval, which among other things depends on the number of engines. This restricts routes over areas without alternate airports, for example oceans, deserts, steppes, extensive forests or high mountains, as well as other areas that cannot be approached, such as war zones. Without ETOPS approval, general, even stricter route restrictions apply.

Due to the altitudes and the associated low air pressure, technical difficulties arise in supplying the engines with sufficient oxygen from the ambient air, especially with piston engines. One way of compensating for the lower air density in piston engines is through the engine supercharging . Gas turbines also show performance losses at high altitudes, but to a lesser extent, since the efficiency increases in colder air.