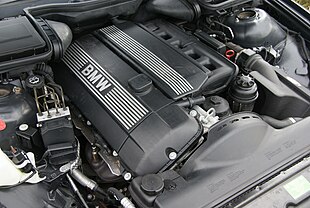 In-line engine is the designation of the design of a reciprocating piston engine , the cylinders of which are in a row. In-line engines are by far the most common type of internal combustion engine used in cars, trucks, and motorcycles. The smallest form the parallel twin - two-cylinder engine ; as a marine diesel engine (e.g. Wärtsilä RT-flex96C ) there are versions with up to 14 cylinders. 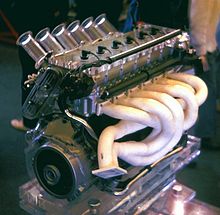 BMW in-line six-cylinder, which was partly built from Plexiglas for demonstration purposes

The latter type occurs almost exclusively in historical aircraft. The landing gear can be designed less high for a given propeller diameter, and the view of the pilot is less obstructed by exhaust gases. In addition, the center of gravity is lower and the accessibility of the cylinder head ( valve control ) and spark plugs is easier. Air-cooled in -line four-cylinder engines with hanging cylinders were e.g. B. the Zündapp 9-092 and the Hirth HM 515 .

In particular, engines with OHC valve control have a greater overall height due to the overhead camshaft (s) and are often installed at an angle as transverse and longitudinal engines in order to keep the bonnet flatter. Motors installed horizontally are often used as underfloor motors in trucks, buses and railcars.

In the case of vehicle engines, the cylinder count begins opposite the power output side, i.e. opposite the flywheel or the clutch . This does not apply to German ship and stationary engines . However, there are Japanese and French manufacturers who are also starting to count on the clutch side.

In-line engines are installed lengthways in rear-wheel drive automobiles with a front engine , and also transversely in mid- engine or rear-engine vehicles. With front-wheel drive , they are usually installed transversely, sometimes also lengthways, which, however, causes increased effort in the vehicle or differential gear . Transverse installation predominates in motorcycles. In the early days there were motorcycles with longitudinally installed in-line engines from, among others, Indian , Windhoff and Nimbus ; more recently with the BMW K series ( K 1 to K 1200 RS ) and currently with the Triumph Rocket III . In-line engines are practically always installed lengthways in trucks.

In-line eight-cylinder marine diesel of an emergency generator in the Anhalter bunker in Berlin , 2014

Probably the first engine of this type produced the Daimler-Motoren-Gesellschaft (DMG) in 1897 for the airship Germany by Friedrich Hermann Wölfert . In 1902, the French manufacturer CGV designed the first eight-cylinder in-line engine for an automobile. This racing engine had a displacement of 7.2 liters and standing valves on both sides of the cylinders ( T-head engine ). This was followed in 1903 Premier (USA), 1904 Bellamy (France), Dufaux (Switzerland) and the Winton Bullett-2 racing car (USA), 1906 Maxwell-Briscoe (USA) with a Vanderbilt Cup racing car and 1907 Porthos (France) , Weigel (United Kingdom) and again Dufaux. The Florentia boat engine, which Émile Mathis sold among others, is documented as early as 1906 , and in 1907 Wolseley-Siddeley produced such an engine with already 200 hp (147 kW) for the Ursula racing boat ; a further development was used in 1910 in the first British rigid airship . In the same year, the Green overhead camshaft aircraft engine appeared . In 1911 DMG brought out the Mercedes J8L airship engine .

The first production car with such an engine was the Isotta Fraschini Tipo 8 ; the engine was developed in 1912, used successfully in the Tipo V5 racing car with an overhead camshaft and went into series production in 1919. Ettore Bugatti experimented 1913–1914 with an eight-cylinder block engine , which consisted of two four-cylinder blocks with a flywheel in between. Many Bugatti automobiles, starting with the Type 30 , had in-line eight-cylinders. The largest of these - used in the Type 41 "Royale"  - is one of the largest car engines ever built with a displacement of 14.7 liters (later 12.7 liters); up to four of them were installed in the Bugatti multiple unit (type XB 1000 of the French railways SNCF ).