Kugelmotor is the name for electric motors and combustion engines in different variants. Similarities can be found in each case in the spherical shape. Due to their design, spherical motors are difficult to construct and manufacture. The designs described below have fundamental technical differences.

Constructions in the field of electric motors

Electric motors with hemispherical hollow stators and matching hemispherical rotors that run without a shaft only on a bearing ball in the pumped medium are called spherical motors. They are used as brushless DC motors in water pumps ( heating , circulation and service water pumps ). Such machines are u. a. manufactured by Laing and Vortex. The motors do not require a breakaway torque due to their bearing .

There are projects for spherical motors as three-axis direct drives as robot drives . There are permanent magnet - stepping motors with a spherical rotor having pole pitches in 3 coordinates that can pivot its output shaft in two axes.

Constructions in the field of internal combustion engines 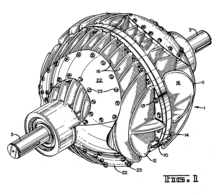 The first patented spherical motor was developed by Frank Berry in 1961 in the USA. A wooden functional model of the Berry engine was made before Frank Berry died in 1969 and his engine was forgotten.

A spherical motor that works on the two-stroke principle was developed by the physicist Wolfhart Willimczik. Two oblique-axis rotors, the piston rotor and the cylinder rotor, run into each other. Both rotors rotate together at the same speed. The spherical piston rotor moves without contact in the shell of the cylinder rotor. The piston rotor has a recess for a partition which couples the halved rotors to one another in a rotationally fixed manner. Willimczik applied for a patent for his engine in the GDR on July 11, 1974 (GDR patent No. 113788, BRD patent 25 19 911). 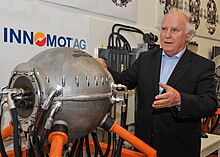 Herbert Hüttlin developed a spherical motor that works with curved pistons that move against each other. This engine is known in the literature under the generic term rotary piston machine .

In February 2002, Hüttlin wanted to apply for a patent on a spherical motor (WO 03/067033 A1). During the patent search, Berry's invention was rediscovered and cited in the Hüttlin application.

In 2005, Hüttlin gave up the Berry principle because it could neither achieve the required compression nor the exhaust-oil-free system required today. As a result, he developed the so-called Hüttlin drive technology with his own new kinematics. Based on this principle, he constructed auxiliary motors for electric vehicles ( range extenders ), compressors , motors for combined heat and power plants and more.

Arnold Wagner developed the Hiteng spherical motor. The Hiteng spherical motor works with two double pistons that rotate in a spherical housing. The inventor calls this engine an oscillating piston machine . Wagner originally developed the engine for Peraves AG, but when he left the company in 2010 he took the engine project with him to what is now Hiteng AG. With the proven power output, the Hiteng spherical motor is the first and so far only functional motor based on the Berry basic patent from 1963. It partially corresponds to the Hüttlin spherical motor version 1 or the Berry motor, but represents a separate development that started with 3 Patents and a total of 37 granted patent claims is protected in 44 countries. These include the ceramic balls or the groove ellipsoids with oil damping / lubrication, the 4-in-2 rotary valve control of the precompression and the working chamber charging through the antechambers, the housing division for incorporating the overflow channels, an effective and elaborate fluid and sealing system , Pinch and swirl chamber combustion chamber shapes and internal oil and external water cooling.

As of 2014, none of the spherical motor concepts had been successful on a large commercial scale.