An H-engine is an internal combustion engine with a cylinder arrangement in which the cylinders or rows of cylinders look like a horizontal, large H when viewed in the direction of the crankshafts . An H-engine can be seen as two 180 ° V-engines , coupled one on top of the other . The “two” engines each have their own crankshaft, which is connected and synchronized with gear wheels at the end of the engine from which the power is drawn . It therefore resembles a mixture of a tandem engine and a boxer engine . It is not a double piston engine because the pistons do not act on a common combustion chamber. 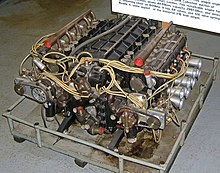 The cylinder arrangement has a worse power-to-weight ratio than variants with only one crankshaft. For aircraft , an engine that is flat and compact, even with a higher number of cylinders, is advantageous because the frontal area, which is small compared to radial engines, results in less air resistance. Since the common center of gravity of both pistons on a crank (offset) is always in the plane that is determined by the axes of the crank pin, a perfect mass balance can be achieved with rotating counterweights .

Because of the few advantages over many disadvantages, H engines were used very rarely.

H engines in the motorcycle 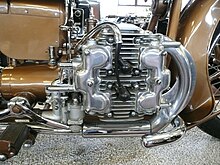 H-engine in a Brough Superior Dream

Subaru has irritatedly marketed water-cooled 4- and 6-cylinder boxer engines as H-4 and H-6, although their cylinder arrangement has nothing to do with a real H-engine. The correct designation would be B4 or B6 (B for boxers).

Saab used the "H" as a type designation for a conventional four-cylinder in-line engine with 2 and 2.3 liters displacement ("H-Motor", H engine, but it was also called B205 or B235).