Animation of a rotary engine with a fixed crankshaft. The cylinders are arranged in a star shape around the crankshaft.

The rotary engine is usually an internal combustion engine in which the crankcase and the cylinders rotate around the stationary or counter-rotating crankshaft; therefore the term rotary engine is sometimes used. In many models, the cylinders are arranged in a star shape around the crankshaft, making the engine a variant of the radial engine , but boxer and single-cylinder engines have also been designed. The movement sequence of rotary engines is kinematically reversed compared to conventional reciprocating piston engines . Most models of rotary engines had a stationary crankshaft with attached, rotatably mounted connecting rods and a rotating crankcase with the cylinders . The cylinder and crank pin are arranged eccentrically to one another, whereby the stroke of the individual pistons occurs within the cylinder. In some late models, the crankshaft rotated in the opposite direction to the cylinder star in order to reduce the absolute speed of the cylinder star.

Another variant of a rotary engine is the elbow engine , a power machine that converts steam pressure or compressed air into mechanical energy. 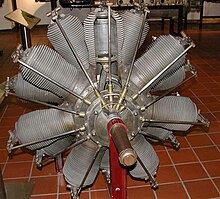 Rotary engines were mainly used in the early days of aviation . Since they were looking for powerful but light engines, they wanted to replace the complex and heavy water cooling with simple air cooling. In order to obtain a sufficiently large air flow for cooling and to save the flywheel, the cylinders were allowed to rotate around the crankshaft. Rotary engines had up to 14 cylinders, although these variants with their double cylinder star were not widely used because of the cooling problems. In addition, because of the high rotating masses, large angular impulses occurred, which impaired the maneuverability of the machines.

The rotary engine known as "Gnôme" was developed in Gennevilliers (France) in 1908 by the brothers Laurent and Louis Seguin . In the German Empire from 1913 the engine factory Oberursel AG built the construction under license under the name Oberursel-Gnome U O with 7 cylinders; a displacement of 11.8 l and 80 hp (59 kW) rated power at 1200 rpm. On the basis of this engine, the Oberursel engine factory developed the U III double radial engine with 14 cylinders and 160 HP (118 kW) rated power, which was built from 1914 to 1916 with almost six hundred units. The disadvantages mentioned above became apparent in practical use, so that the advanced development of an 18-cylinder double radial engine was discontinued.

After Oberursel U I with 9 cylinders, 16.3 liters and 95 hp (70 kW) was from the end of 1916 in the type Le Rhône 15.1 liters and 110 hp (81 kW) power rating in the UR IIa with 9 cylinders, a plurality of fighter aircraft the air force of the German army used, including the Fokker Dr.I and Pfalz Dr.I . As the last Oberursel development, the UR IIIa passed the acceptance test of the army in May 1918. This engine with eleven cylinders and a displacement of 18.4 l had a nominal output of 160 hp (118 kW).

The Gandenberger'sche Maschinenfabrik Georg Goebel in Darmstadt was after three years of development in early 1917 to achieve the acceptance of installations for their rotary engine Goe II. The construction with seven cylinders, 15.7 liters displacement and 100 HP (75 kW) was only built in small numbers and from May 1918 it was replaced by the Goebel Goe III , which with nine cylinders and a displacement of 27 liters had an output of 160 HP (118 kW) reached. Most of the 229 Goe IIIs delivered were used by Fokker in the single-seaters.

Rotary engines do not require any additional flywheels, as the crankshaft housing and the cylinders attached to it act as a flywheel. As a result, they were about a third lighter than conventional motors with mechanically smooth running. The weight advantage was an important factor, especially in fighter planes from the First World War.

Various properties are cited as disadvantages that led to the extinction of the engine design:

On the other hand, there were also advantages, for example:

Later models had a mixture feed that was separate from the crankcase because of the heating. Some samples sucked in the fresh gas via flutter valves , which leads to severe flashbacks when throttled, which is why rotary engines were often controlled by switching the ignition off and on. When replicas of the old aircraft with these engines float in for landing at air shows , the dying and resuming can be clearly heard by switching the ignition off and on to reduce speed.

Since the fuel-air mixture was fed through the crankcase, there was a risk of the oil being diluted by the fuel, with associated lubrication problems, which is why the petrol-insoluble castor oil was preferred .

Some late models (for example the Siemens & Halske Sh.III from 1917) were designed as counter-rotors, in which the crankshaft rotated in the opposite direction to the cylinder star via a gearbox. With a gear ratio of 1: 1, with the same relative speed between star and crankshaft and thus the same power, the speed of the cylinder star could be halved compared to the aircraft. The propeller efficiency has thus been significantly increased while at the same time reducing the harmful gyroscopic effects and gas exchange losses.

Megola motorcycle with a rotary engine in the front wheel

As early as 1892 there was a French Millet motorcycle with a rotary engine. In the 1920s there was the Megola , a motorcycle with a five-cylinder counter-rotating radial engine in the front wheel hub, the housing (partially protruding between the spokes) rotating together with the wheel and the crankshaft in the opposite direction. The Megola had neither a manual gearbox nor a clutch, so it always had to be pushed, but it was very successful in sport and won German championships in 1924 against the BMW factory team.

But there were also rotary radial engines in motorcycle frames, the best known and most commercially successful was the Redrup Radial from 1912 with a counter-rotating three-cylinder and, in contrast to the Megola, an otherwise conventional drive train with an external gearbox and belt drive.

Some of the 1,904 motorcycles built in Wales Barry, a rotary engine was installed, but not (with only two cylinders like a V-engine shaking the) radial engine , but a two-cylinder boxer engine , which rotated in the frame center.

In the 1940s, Cyril Pullin even designed a single-cylinder engine whose housing rotated in the wheel hub together with the wheel. The clutch and drum brake were built into the wheel hub called Powerwheel to compensate for the weight . However, the Powerwheel did not get beyond the prototype stage.

Rotary engines were also used in automobiles made by American automobile brands at the beginning of the 20th century. The manufacturers Adams-Farwell , Badger Motor Car Company , Bailey Automobile Company and Intrepid had only regional distribution. 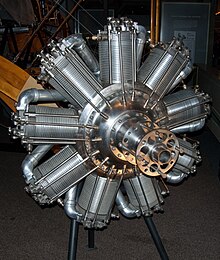 In aircraft rotary engines were mainly in the period before and during the First World War for use, such as the Fokker -models E1 - E3 and Dr.I . In Great Britain, the most successful rotary engine came from Walter Owen Bentley .