The title of this article is ambiguous. Further meanings are listed under Fokker (disambiguation) .

The Fokker aircraft factories were in 1912 in Berlin , founded a year later to Schwerin relocated after the First World War in the Netherlands convicted and were up to the bankruptcy in 1996 temporarily the only Dutch manufacturer of civilian airliners. The name or brand Fokker has belonged to Guest, Keen and Nettlefolds since December 2015 .

Foundation and pioneering function in the First World War

Anton Herman Gerard Fokker started producing aircraft in Berlin-Johannisthal with his AHG Fokker Aeroplanbau from 1912 . In 1913 the company was relocated to Schwerin-Görries and the name was changed to Fokker Aeroplanbau GmbH , which was renamed Fokker Flugzeugwerke mbH in April 1916 . The famous Fokker monoplane (EI to E.IV), the three -decker Fokker Dr.I (often associated with Manfred von Richthofen ) originated from this plant, located directly on Lake Schwerin in Bornhövedstraße, of which two production halls still exist today . and the Fokker D.VII , aircraft types with extraordinary performance parameters for their time. Fokker was one of the first in aircraft construction to manufacture a tubular fuselage structure from welded, seamless tubes.

Before and during the First World War , Fokker built the following types:

In 1919, with an ingenious plan, Anthony Fokker relocated his factory by rail to the Netherlands within a few weeks, because after the First World War the Allies initially banned the construction of aircraft and aircraft engines. There, Fokker founded the Steinkohlen Handels Vereinigung (SHV) together with the van Beuningen and Fentener van Vlissingen families and, on July 21, 1919, with a few other entrepreneurs, the Dutch aircraft factory NV Nederlandsche Vfluguigenfabriek Fokker .

Fokker used the halls of the ELTA air traffic fair , the first Dutch aviation exhibition in Amsterdam , which opened in the summer of 1919. In addition to the further development of military aircraft, Fokker switched to the development of commercial aircraft. In 1921 the Netherlands Aircraft Manufacturing Company of Amsterdam was founded as a subsidiary for sales in North America. 1927, the Dutch, the Fokker Aircraft Corporation of America , in the North American operations of the Group were bundled and hence the then Fokker Aircraft Corporation firmierende Netherlands Aircraft Manufacturing Company of Amsterdam took over. There were several factories in the United States, including Passaic , New Jersey (since 1927) and Glen Dale (at Wheeling ), West Virginia (from 1928). This subsidiary was completely taken over by General Motors in 1931 . In 1936 the company had a 40 percent market share in America.

In the early 1930s, 54 airlines worldwide flew the popular F.VIIa-3m . On December 30, 1933, a four-man crew made the return flight on the postal route from Amsterdam to Batavia in record time with a three-engine Fokker “Pelikan” .

Military aircraft were also developed further. After the initial development of war types such as the D.VIII, new models were constructed. The CV and D.XXI, which are also very successful in export, should be mentioned here. At the Paris Air Show (Salon d'Aviation) in 1936, the twin-engine destroyer Fokker GI was presented with a double hull and four machine guns in the nose. However, it was predominantly the single-engine Fokker D.XXI fighter that was used in aerial combat against the Messerschmitt Bf 109 at the beginning of the Second World War . The Fokker GI was hardly ever used, some machines were later taken over by the German Air Force as training aircraft.

Between the wars, Fokker built the following types:

After 1945 the company shortened the company to "Fokker". It was economically sound, especially due to the success of the Fokker S-11 , of which over a hundred copies could be sold immediately after the war. In 1956, production of the Fokker F-27 Friendship began , a flagship in Fokker history. The Dutch government contributed 27 million guilders to the development costs. The F-27 was one of the best-selling turboprop aircraft in the world. By the end of production in 1986, the company had sold 786 units of this type worldwide. The Dutch Air Force still uses this model to this day.

With the Fokker F28 "Fellowship" the entry into the construction of jet airliners succeeded from 1967.

Fokker was involved in the construction of the Lockheed F-104G Starfighter with the Dordrecht and Schiphol plants in ARGE Nord .

In 1969, Fokker sought cooperation with the German United Flugtechnische Werke GmbH (VFW) in Bremen . However, the cooperation was unsuccessful. The only product was the VFW 614 aircraft , of which only 19 copies were produced. The collaboration ended in early 1980. 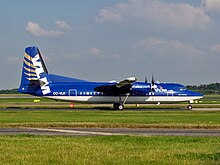 In 1987, Fokker was economically badly hit. The development costs for the new Fokker 50 and Fokker 100 models reached unimaginable proportions. The government invested 212 million guilders on the condition that Fokker should look for a strategic partner. British Aerospace and DASA were eligible.

In 1990 Fokker received the König Willem I Prize for good corporate governance and renewal. Prince Claus von Amsberg presented the award to M. Kuilman, Chief Executive Officer of Fokker. A year later it was announced that a new type of aircraft called the Fokker 70 would be developed.

After years of difficult negotiations, a preliminary contract was signed between Fokker and DASA on October 30, 1992 . However, the problems at Fokker could not be resolved. In 1994 Fokker celebrated its 75th company anniversary. The new Fokker 70 model , a shortened further development of the Fokker 100, was proudly presented. However, sales of this model did not live up to expectations (a total of 47 units were produced by the time Fokker was dissolved in 1996), which increased the problems.

The German parent company Daimler-Benz AG ended the negotiations on January 22, 1996 and parted with Fokker. On January 23, 1996, preliminary judicial supervision with a deferred payment was initiated in Amsterdam. On March 15, 1996, Fokker filed for bankruptcy.

Parts of the company remained. The space department operated as an independent company until 2002 under the name Fokker Space , then as Dutch Space . The facilities for aircraft accessories, service, repair, maintenance and spare parts supply for Fokker aircraft that are still in operation have been part of the Stork Group since 1996 under the name of Fokker Services . At the end of August 2009, Stork bundled its aviation activities under the Fokker name. In 2010 this part of the group was renamed Fokker Technologies. Fokker Technologies has been part of GKN Aerospace since December 2015.

At the beginning of 1998 a Dutch company called Rekkof announced that it would restart production of the Fokker 70 and 100 . The company has been called the Netherlands Aircraft Company since 2014 and has designed the Fokker 130 , but no piece has yet been produced.

List of aircraft types made by the manufacturer Fokker